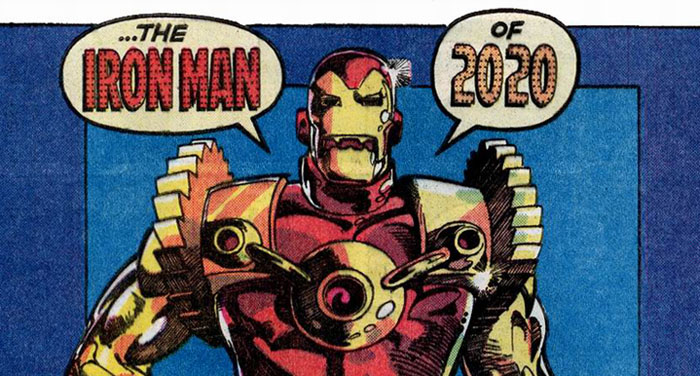 Happy New Year!  To celebrate the occasion, today I am taking a quick look at the comic book adventures of Machine Man and Iron Man in the distant, far-off future year of, um, uh, 2020 AD… Okay, yeah, I can’t believe it’s 2020 already, either!

Machine Man was created by none other than the legendary Jack Kirby himself, debuting in, of all places, the 2001: A Space Odyssey comic book series, which had been inspired by the film / novel by Stanley Kubrick and Arthur C. Clarke.  First known as Mister Machine, aka X-51, he appeared in 2001: A Space Odyssey #s 8-10 published in mid 1977.

Mister Machine was a robot who gained sentience, with one of the mysterious alien Monoliths from the movie playing a role in his evolution towards becoming almost human.  Following the cancellation of the 2001: A Space Odyssey comic book, the character, renamed Machine Man, received his own ongoing series in early 1978.  Kirby wrote & penciled Machine Man for nine issues, with Mike Royer providing inks.

By late 1978 Kirby had become disenchanted with mainstream comic books, and he left Marvel Comics to go into the animation field.  The storyline begun by Kirby in Machine Man was concluded by writer Roger Stern and penciler Sal Buscema a few months later in Incredible Hulk #s 234-237.  This was followed by a revival of the Machine Man ongoing series, picking up from the original numbering, with another Silver Age legend, Stave Ditko, as the artist.  Issue #s 10-14 were written by Marv Wolfman, with Tom DeFalco then writing #s 15-19.

In the early 1980s Machine Man made the occasional guest appearance here and there.  He was once again given the spotlight in 1984 with the Machine Man four issue limited series, set three and a half decades in the future, in the year 2020.  Tom DeFalco returned to wrote X-51’s future adventures.  The first three issues had pencils / breakdowns by Herb Trimpe, with finished art & colors by Barry Windsor-Smith, an unusual pairing that nevertheless worked very well.  BWS took over the full art chores for Machine Man #4, also co-plotting that final issue.  Michael, Higgins, Diana Albers, Janice Chiang and Jim Novak lettered an issue apiece, and the whole thing was edited by Larry Hama.

DeFalco’s story is set in a dark industrialized dystopia where corrupt corporations have seized political power (so, yeah, not too different from our actual real-world 2020, amiright?) and bands of anarchist scavengers hope to find a free, independent existence under the radar.  One of these groups of Midnight Wreckers, searching through a dumping ground belonging to Baintronics Inc, discovers a box containing the dismantled Machine Man.  Evading the Baintronics security forces, the Wreckers return to their base and re-assemble Machine Man.

Baintronics is run by Sunset Bain, an industrialist & socialite who moonlighted as the masked arms dealer Madame Menace, clashing with Machine Man on more than one occasion back in the day.  Now in 2020 she is allied with Miles Brinkman, a former US Senator who is another old foe of X-51.  Brinkman had previously waged a McCarthy-esque campaign of fear-mongering against Machine Man, hoping to ride a wave of robotphobia to greater political power.

DeFalco has an interesting approach to the future incarnations of Bain and Brinkman.  At this point they have basically won, having amassed tremendous political & financial power, yet they are seemingly unable to enjoy their spoils, having grown old & tired, reduced to worn-out shadows of their former selves.  And once they learn that Machine Man has been reactivated they are consumed by uncontrollable paranoia that this former adversary will seek to destroy them.  The pair are defeated as much by their own failings as they are by Machine Man and the Midnight Wreckers.

DeFalco shows that Machine Man is actually more human than either Sunset Bain or Miles Brinkman, who in their fear and panic project upon him their own ugly motivations of hatred and vengeance.  Machine Man, as well as his onetime love, the silver robot Jocasta (rebuilt by Bain to be her aide, but ultimately serving as her conscience), are more capable of feeling compassion and expressing forgiveness than their human foes.

The miniseries introduced Arno Stark, descendant of Tony Stark, the Iron Man of the year 2020.  Arno is an amoral mercenary, and he is more than happy to accept an assignment from Sunset Bain to hunt down & destroy Machine Man.  Iron Man clashes twice with Machine Man, and in both encounters he is defeated by his robot opponent.

This leads into the events of the Iron Man 2020 special, which was published a decade later, in 1994.  It was co-plotted, by Bob Wiacek & Walter Simonson, scripted by Simonson, penciled & inked by Wiacek, with Will Rosado penciling the second half of the book over Wiacek’s layouts.  This was one of the all-too-infrequent penciling jobs by Wiacek, who is best known for his work as an inker / embellisher.  Rosado, who was early in his comic book career, also did good work here. The special was lettered by John Costanza and colored by Christie Scheele.

As a tie-in, Marvel re-issued the Machine Man miniseries as a two double-sized issues.  That was certainly helpful to me, as I hadn’t been reading comics regularly in 1984, and so missed the original release.

The Iron Man 2020 special opens very soon after the events of the miniseries.  Much like Bain and Brinkman before him, Arno Stark is a haunted man: haunted by his defeat at Machine Man’s hands, haunted by the burden of keeping the financially weakened Stark Enterprises afloat, and haunted by the seeming impossibility of living up to the legend of his ancestor, Tony Stark, the original Iron Man.  As the old saying goes, heavy hangs the head that wears the crown.

Desperate to save his company, Arno accepts an offer from Marcus Wellington, one of his biggest competitors.  Arno is hired to rescue Wellington’s daughter Melodi, who has been kidnapped by terrorists and is being held for ransom.  Arno dons his Iron Man suit and sets course for the terrorists’ island stronghold.  Of course, as is often the case with corporate machinations, the situation is much more complicated than it initially appears, and Arno soon finds himself in the middle of more than one double cross.

The end result of these events are that they push Arno Stark towards, well, not necessary becoming a hero, by any means, but at least to start walking a slightly less avaricious, brutal path. 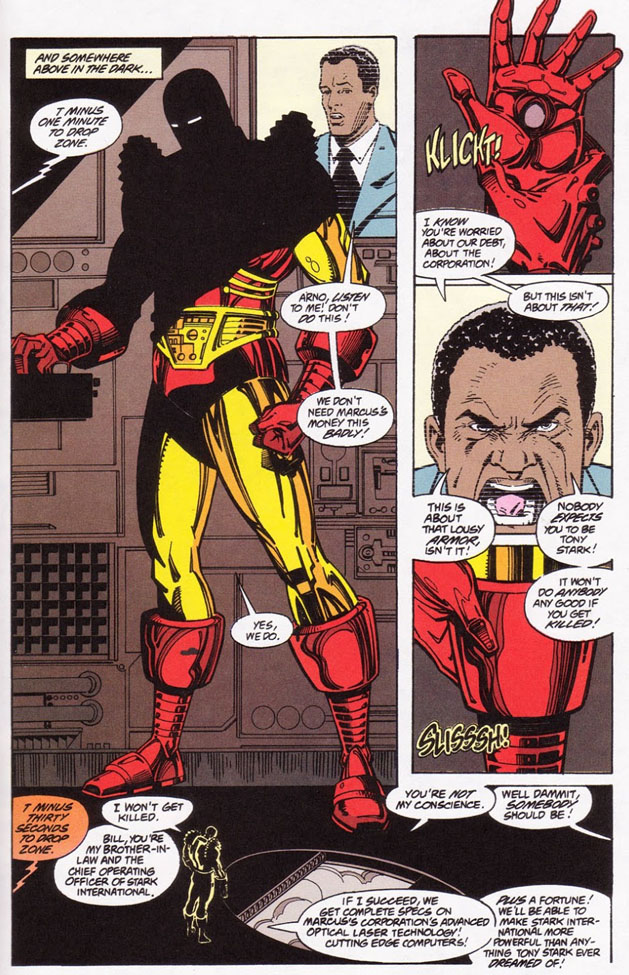 Hey, everyone loves a good redemption story.  Certainly Wiacek & Simonson make this one more believable than most by showing that it’s only just the beginning of Arno Stark’s path away from villainy.

I’ve met Bob Wiacek on a few occasions at comic book conventions.  A decade ago at a February 2010 show he did a drawing of Iron Man 2020 in my villains sketchbook.  It is a distinctive costume, a sort of retro future look, almost steampunk with those big gears, and he renders it well.

I didn’t want to get into too many specific details about either the Machine Man miniseries or the Iron Man 2020 special, because I think they are both worth tracking down and reading.  Marvel published an Iron Man 2020 trade paperback in 2013 collecting both, along with several other stories.

Also, for those interested in Machine Man’s various Bronze Age incarnations (the original Kirby stories, the Ditko-drawn revival, and the 1984 miniseries) I recommend checking out Back Issue #25 from TwoMorrows Publishing.  “Call Me Mister… Mister Machine!” written by Allan Harvey is offers a wealth of behind-the-scenes info concerning Machine Man’s adventures in the 1970s and 80s.

And of course, since it’s now 2020 in the real world, Marvel Comics is bringing back Arno Stark.  It seems that Tony Stark is going to die (what, again?!?) and Arno, who in “mainstream” Marvel continuity is Tony’s long lost twin brother (yes really!), will become the new Iron Man… at least until the inevitable resurrection.  Still, with writing by Dan Slott & Christos Gage, it sounds like it could be a fun ride.