Regular readers of this blog will recall that I am a fan of Ann Nocenti.  Between the early 1980s and the mid-1990s she wrote many offbeat, thought-provoking stories at Marvel Comics.  After leaving the comic book biz, Nocenti was involved in various other fields, working as a journalist, filmmaker and teacher.

I definitely missed the unique perspective that Nocenti brought to her work.  So I was happy that after DC Comics began their New 52 soft reboot, they hired Nocenti to write several of their titles.  Nocenti had runs on Green Arrow, Catwoman and Katana.  Her most recent work at DC was on Klarion.

The character of Klarion the Witch Boy was created by none other than Jack Kirby, and he made his debut in 1973 in The Demon #7.  Klarion appears to be something of a favorite among comic book creators, since he’s popped up semi-regularly in the decades since then.  I’m most familiar with him from his appearances in the revival of The Demon in the early 1990s by Alan Grant & Val Semeiks.

Klarion is admittedly an odd character to give an ongoing title, and when this was announced my first reaction was “That’s probably not going to last too long!”  Indeed, Klarion made it six issues before getting canceled.  It appears Nocenti herself recognized that she had a limited window of opportunity and made the most of the circumstances, going in and writing the hell out of the book for half a dozen issues.  The result is some very interesting stories.

As the first issue opens, Klarion is hitchhiking the crossroads of the multiverse, having run away from school after zapping his professor in the dark arts.  He gets a ride from Beelzebub, a demonic barber who specializes in close shaves.  Arriving on Earth, Klarion rescues a teenager named Rasp from getting beaten up.  Klarion is looking for a place to stay, and Rasp directs him to the Moody Museum.

The museum’s proprietors, Piper and Noah, offer Klarion a room and a job.  Klarion is immediately drawn to the lovely teenage mystic Zell.  Rasp, meanwhile, heads over to the Necropolitan Club to get some of the cutting-edge cyber-technology the proprietor Coal is disseminating.  Like all good drug dealers, Coal tells his customers “The first hit’s free.”  But after that, once he has his clientele hooked, he knows they will pay literally anything to maintain their upgrades.

That evening Klarion and Zell go to a party at the Necropolitan Club where they run into Rasp.  The teenager, who has an unrequited crush on Zell, is furious to see her with Klarion.  Using his new tech, Rasp lashes out at Klarion.  The Witch Boy is ready to hand Rasp a beating, until Piper and Noah step in and defuse the situation, at least temporarily.  Meanwhile, back at the Club, Coal proceeds with his plans to roll out his “Buddybot” technology, hoping to snag a large, well-paying group of customers. 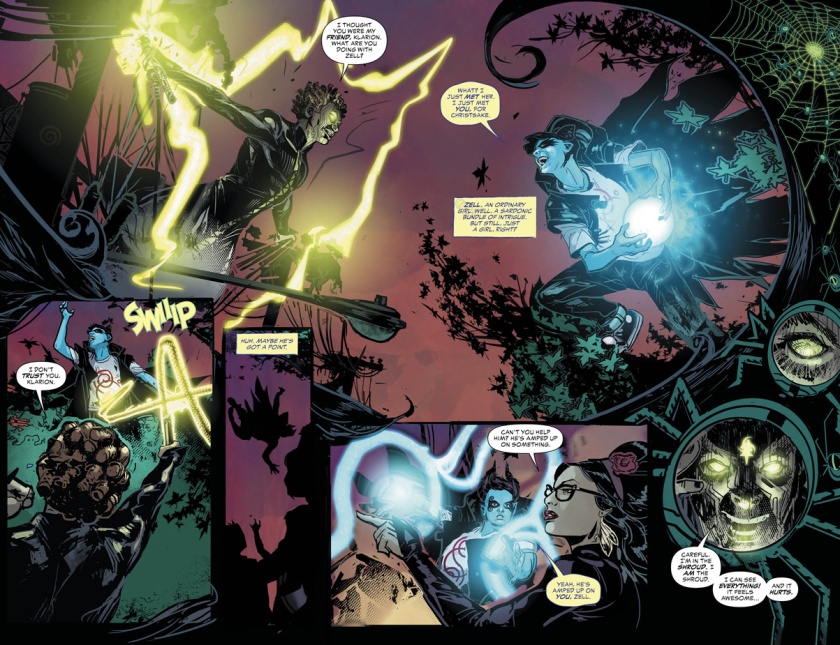 As someone who is not a fan of decompressed storytelling, I very much enjoyed Nocenti’s writing on Klarion.  She packed a heck of a lot of plot and concepts into these six issues.

One of the main themes is that Klarion is an amoral individual who uses his powers recklessly.  He is walking along a moral tightrope, one he could slip off any minute.  Various factions recognize this.  Piper and Noah are hopeful that they can guide Klarion, teach him to use his powers in an ethical manner.  Coal and Beelzebub both recognize that the Witch Boy needs only the slightest nudge to send him into darkness.

Nocenti also addresses the extremely rapid advancement of science, the concern that technology evolves faster than the ability of human beings to utilize it responsibly.  Various characters debate whether the tech developed by Coal is value-neutral, or if it is good or bad, an asset or a curse.  Will humanity be able to utilize this new science, or will they become addicted and overwhelmed by it?  An argument between Klarion and Zell in issue #4 encapsulates this…

Klarion: Trust me, we’ve got to smash these things. Starting with your Petbot. Her tech is predatory.

Zell: She’s just a machine like any other. Is a phone evil? Only if you use it to hurt someone.

Klarion: They aren’t phones! They don’t just sit quietly in your pocket till you turn them on. They’re parasites. They feed off you and learn and grow.

Zell: Grow in good ways. I program my Buddybot. She’s symbiotic with me.

The idea that the Buddybots can be “grown” into the “perfect” lover or friend or pet is unsettling.  What exactly does that mean?  If the Bot you have always agrees with you, never argues with you, is it an actual entity?  Or is it merely just a projection of your own self?

Nocenti is exploring the same territory that she touched upon in the late 1980s in Daredevil with the character of Number Nine, who had been genetically re-engineered to be the “perfect” woman and wife.  Is that really someone who can be a genuine life companion, or is it merely a parrot in human form, feeding back to you what you want to hear?

Would you want a Buddybot?  Anyone who has been in a relationship and had a huge blow-out with their significant other, or who has been alone for a long time, is going to find that choice incredibly tempting.  Imagine always having a companion & lover and never fighting!  But would that be an authentic relationship?

I have sometimes heard love described as wanting to be with another person in spite of their flaws and mistakes.  Real relationships challenge you, force you to grow, require you to make compromises, to understand the other person.  Being involved with a “perfect” companion could be just the opposite of that, a narcissistic rut.  In the end, would you actually be happy? 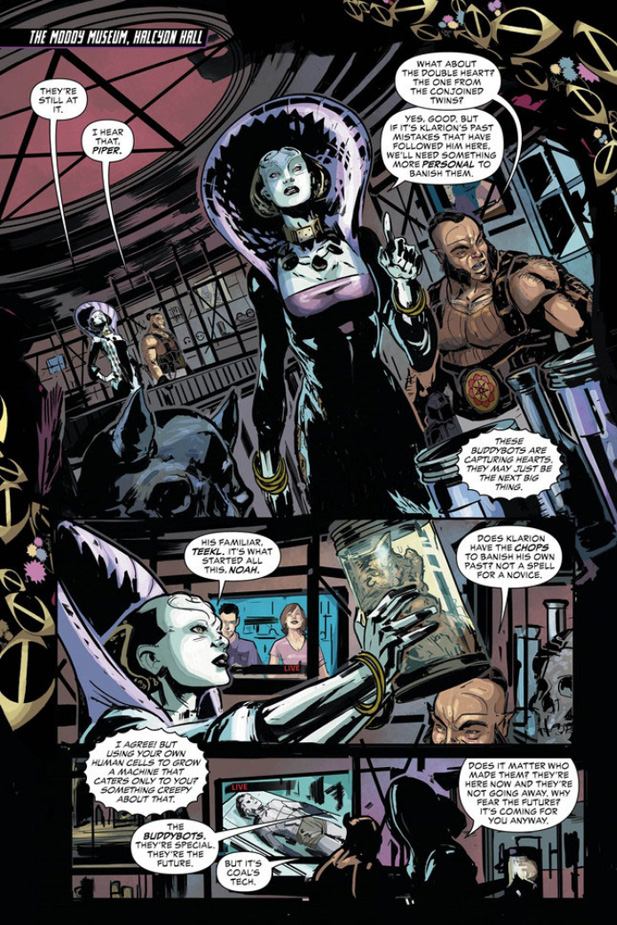 Nocenti draws a parallel between Klarion’s struggle and that of humanity’s.  Just as the Witch Boy is at risk of misusing his mystic abilities, of being seduced by the power that he can tap into, the humans acquiring the nanotech from the Necropolitan Club are in danger of becoming addicted to it, of letting it overwhelm them.

Nocenti even argues that perhaps there really isn’t any difference between magic and technology, with one character stating a variation of Clarke’s Law:

“You know how everyone thought thunder was God’s bowling league? Everything mysterious turns out to be no big deal in the future.”

There is a whole lot to digest in Nocenti’s writing.  I’m looking forward to re-reading this series in the near future, seeing if I gain a different perspective.

While the final issue of Klarion did seem a bit rushed, on the whole Nocenti wrapped up her six issues in a very satisfactory manner.  She tells a more or less complete story while leaving open the possibility of certain character arcs and subplots being picked up in the future if the opportunity arises. 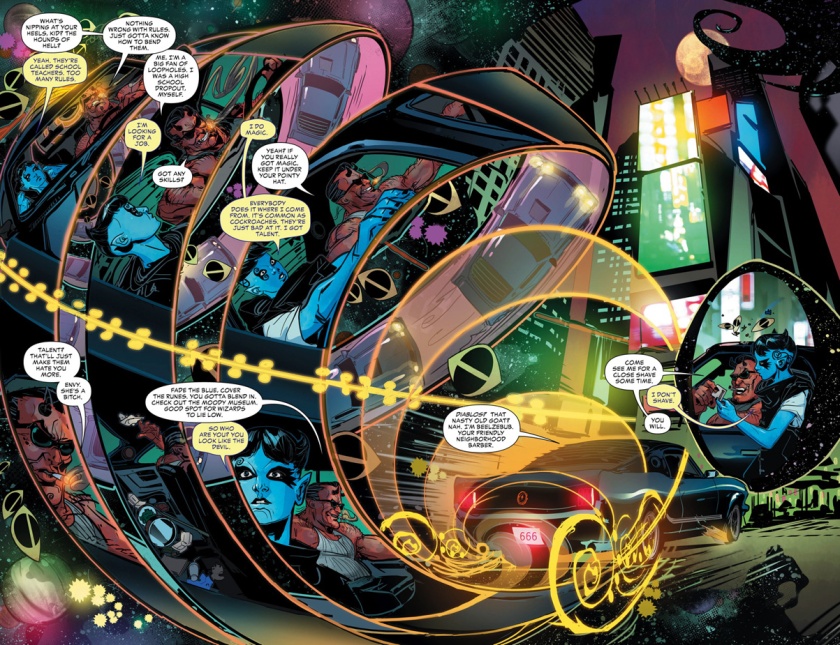 The majority of the art on Klarion is by Trevor McCarthy.  Wow, does he do some absolutely stunning work!  McCarthy lays out these incredibly striking multi-panel double page spreads.  He is incredibly inventive with his storytelling, yet he also knows exactly how to place everything so that the action moves from one panel to the next.

I have seen certain artists who attempted to be clever with their sequential illustration, and unfortunately as a reader I was not able to figure out what the hell was actually going on.  McCarthy, on the other hand, designs these sophisticated pages through which the narrative effortlessly flows.

On the pages where McCarthy also does inks / finishes, he packs in a tremendous amount of detail.  His work is very beautiful.  McCarthy’s character designs for Zell, Piper and Noah are striking and unique.

Guy Major does the coloring on the entire series.  He does impressive work, and it suits the art very well.

Klarion was an intriguingly written series with excellent artwork and coloring.  It’s well worth a look.  There is a trade paperback scheduled to come out in August, and I recommend getting a copy.