Well-regarded British actor Peter Wyngarde, whose career spanned half a century, passed away on January 15th. He was 90 years old.

There is some dispute regarding early details of Wyngarde’s life. It is known that his father was a British diplomat stationed in Asia before World War II.  When Shanghai was invaded by the Japanese in 1941, the fourteen year old Wyngarde was sent to an internment camp along with hundreds of other British citizens.  The next four years were brutal ones.  Wyngarde suffered from malnutrition, and at one point his feet were broken by his Japanese captors.  One of the few concessions the Japanese accorded their prisoners was allowing them to stage plays in the canteen.  This was the beginning of Wyngarde’s lifelong love of acting.

When the war ended Wyngarde was able to return to Britain. It took him some time to recuperate from his harsh ordeal, but afterwards he was determined to make a living as an actor.  He began appearing in theatrical roles in 1946, starting with bit parts and as an understudy, gradually working his way up to more significant roles over the next decade.  Beginning in the mid-1950s he also worked in television.  His breakthrough role was playing Sidney Carton in the BBC’s 1957 adaptation of Charles Dickens’ A Tale of Two Cities.

Continuing his theater work, and occasionally acting in movies, Wyngarde also made several noteworthy guest appearances on British television. He twice played villains on The Avengers starring Patrick Macnee & Diana Rigg.  In the memorable 1966 episode entitled “A Touch of Brimstone,” Wyngarde portrayed the sadistic Sir John Cartney, the head of the kinky, hedonistic Hellfire Club, who were plotting an overthrow of the British government.  A year later he returned to the series in the episode “Epic.” This time he played Stewart Kirby, a washed-up Hollywood star involved in an audacious plot to film the murder of Emma Peel.  The role involved numerous costume & make-up changes for Wyngarde, and he approached it with over-the-top gusto.

In 1967 Wyngarde guest starred on The Prisoner, Patrick McGoohan’s cult classic psychological spy drama. He assumed the role of the Village’s sinister Number Two in the episode “Checkmate.” 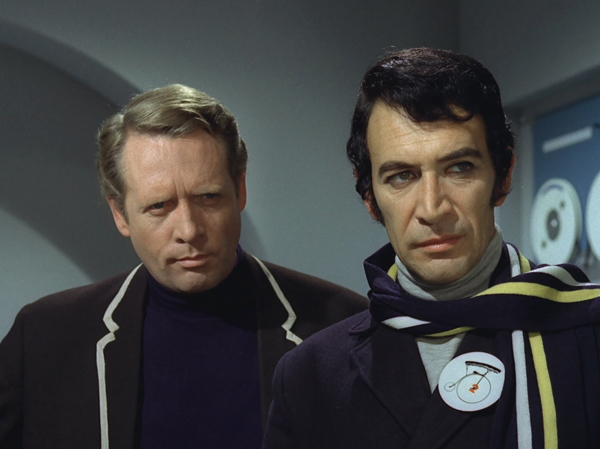 Wyngarde best-known role was the suave, womanizing Interpol investigator turned novelist Jason King. He originated the part in the ITV series Department S, which ran for 28 episodes between 1969 and 1970.  The character of Jason King proved very popular with viewers, and was spun off into his own series, which aired from 1971 to 1972.

Wyngarde was gifted with a deep, smooth voice and a striking presence. Portraying the sophisticated, charismatic Jason King, he was often clad in fashionable, impeccably-tailored suits.  All together this resulted in Wyngarde becoming both a sex symbol and a style icon in the early 1970s.

“I decided Jason King was going to be an extension of me. I was not going to have a superimposed personality. I was inclined to be a bit of a dandy, used to go to the tailor with my designs. And my hair was long because I had been in this Chekhov play, The Duel, at the Duke of York’s.

“Jason King had champagne and strawberries for breakfast, just as I did myself. I drank myself to a standstill. When I think about it now, I am amazed I’m still here.”

Although Department S and Jason King had made Wyngarde famous, he subsequently chose to return to his first love, the theater. In 1973 he co-starred with Sally Ann Howes in a production of The King and I that ran for 260 performances.  This was followed by a number of other stage roles.

In 1980, in the campy Dino De Laurentiis-produced Flash Gordon movie, Wyngarde played Klytus, the gold-masked henchman to Ming the Merciless. Wyngarde also appeared in the Doctor Who serial “Planet of Fire” in 1984, turning in a subtle, memorable performance.  The late 1980s and the 90s saw further work on the stage, as well as occasional television guest roles.

It is a testament to how iconic a figure Wyngarde was that his likeness was immortalized in print in the early 1980s in the pages of the X-Men comic book series by the creative team of Chris Claremont, John Byrne & Terry Austin.  The Avengers television episode “A Touch of Brimstone” inspired Claremont & Byrne to introduce their own version of the Hellfire Club, a cabal of ruthless mutant industrialists manipulating politics and the economy to their benefit, in the now-classic X-Men storyline “The Dark Phoenix Saga.”  One of the members of this Hellfire Club was the X-Men’s old adversary Mastermind, now in the guise of the evil, seductive “Jason Wyngarde,” modeled, off course, on Peter Wyngarde’s performance as Jason King.

As a younger viewer I was passing familiar with Wyngarde from Flash Gordon and Doctor Who. However, it was in the 1990s via the internet that I first learned of how Claremont & Byrne had paid homage to the actor in their X-Men run.  The full Jason King series was finally released on DVD in 2007 here in the States, and I enjoyed it tremendously.  I subsequently viewed episodes of Department S, which was also an enjoyable show.

I was definitely a fan of Wyngarde’s work; he had such a wonderful presence on screen, and a rich, memorable voice.

“He was one of the most unique, original and creative actors that I have ever seen. As a man, there were few things in life he didn’t know.”

Wyngarde was a private man, and wary of the press. He seldom gave interviews.  Last year he spoke at length to Tina Hopkins for The Official Peter Wyngarde Appreciation Society blog.  It is an informative and insightful piece that goes into the details of Wyngarde’s life & career.