I’ve had this blog for a few months now, and I realized that I haven’t written anything about music.  I actually do listen to a lot of music.  It’s just that I find it a difficult subject to speak about.  If you’ve read my comic book reviews, you may have noticed that I focus on plot and characterization, but not nearly as much on artwork.  I sometimes find it a struggle to intelligently write about the elements of illustration and storytelling.  Likewise, along those lines, it’s very difficult for me to explain precisely why I like or don’t like certain music.  So don’t expect to see too many music reviews here!

Anyway, this summer there’s been the 34th annual Seaside Summer Concert Series going on at Coney Island.  Usually the shows are held on a Thursday night, which is a bit of a problem for me, because it takes a long time to travel to Coney Island from where I live.  So if I have work the next day, it’s not a great thing for me to have to try to make my way home from there after the show, and then be at the job a few hours later.  I just seem to need more sleep than most people.  So I hadn’t gone to any of the concerts this year.

Last week, for some reason, the concert was on a Friday night instead of a Thursday.  Since I didn’t have work the next day and could sleep in, my girlfriend pestered me into going.  I have to admit, I wasn’t too enthusiastic about the line-up: Squeeze and The Romantics.  I knew a couple of songs by each band, but I would definitely not classify myself as a fan.

When we got there, I wasn’t too impressed.  It had been raining most of the day, and now the weather was very overcast & breezy.  Hardly any people were there.  Row upon row up empty chairs sat before the stage, looking quite forlorn.  If I had been in either of the bands, I might have taken one look at that scene, gotten back in my trailer, and hit the road.  Yeah, it was that bad.  It was like something out of This Is Spinal Tap, when the band hits rock bottom, and ends up playing to a crowd of a dozen people at an amusement park.

But apparently the show must go on.  The Romantics came on first, and did a decent set.  The only two songs I knew were “Talking in Your Sleep” and “What I Like About You.”  But I enjoyed it.  Like I said, though, I felt bad for the band having to play to a nearly-deserted venue.  People started to slowly trickle in while The Romantics were playing, and even more came during the intermission.

I was half-expecting these new arrivals to be scared off by Brooklyn borough president Marty Markowitz, who took to the stage to talk incessantly, rattling off all sorts of nonsense in between name-checking every single corporate sponsor.  That’s politicians for you; they love the sound of their own voice.  But people stuck around, and by the time Squeeze took to the stage, there was actually a halfway-decent crowd.  Still lots of empty seats, but nowhere near as bad as before. 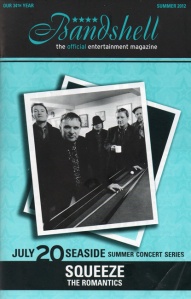 Okay, I was really impressed by Squeeze.  The thing is, I thought that I only knew a couple of their songs, namely “Black Coffee in Bed” and “Tempted.”  Those are two decent tunes, although “Tempted” has unfortunately become one of those horribly overplayed numbers, so I didn’t think that I’d even want to hear it.  But the band did a really great live version of it.  And, surprisingly, it turned out I knew more of their songs than I thought.

Back in the mid-1990s, I used to hear “Pulling Muscles (From the Shell)” on the radio all the time.  I thought it was by some alternative band whose name I could never find out.  I had no idea that it was actually a 15 year old song by Squeeze.  Even more surprising was when the band launched into “Cool for Cats.”  That was a jaw-dropper.  I love that song.  I had no clue that Squeeze sang it.  My exchange with my girlfriend during the show went something like this:

“Wait, Squeeze did this song?”

“Yes. You never knew that?”

“No, I thought that it was by some British band.”

“Squeeze is from England, Ben.”

“Oh! I thought they were from the South or Midwest or something.”

*Ahem!* Shows how much I know.  Anyway, as I said, I really enjoyed the Squeeze set.  They did a fantastic job, and I’m sorry that they ended up performing to such a sparse audience.  Not sure they were happy about fireworks going off at the Brooklyn Cyclones baseball stadium next door, either!  Hope this whole experience doesn’t dissuade them from returning to New York in the future.  I’d like to see them again.  (I’m actually listening to their greatest hits CD as I type up this blog entry.)

Looking over the concert line-up for the rest of the summer, I saw that there were a couple of other shows I’d like to catch.  But they’re on the regular Thursday dates, though.  Joan Jett and the Blackhearts I saw in Central Park several years ago.  So, if I miss them, at least I was able to catch them in the past.  No, the one that really bummed me out was that next Thursday at Coney Island they’re going to have Dennis DeYoung from Styx, Lou Gramm from Foreigner, and Bobby Kimball from Toto, all on one stage.  When I saw that, I disappointedly cried out “Awwwww, man!”  I would really like to catch that show, but I have work the next day.  What a bummer.

That said, if the Pet Shop Boys ever end up playing at Coney Island, I don’t care what day of the week it is, I am so there!