Yesterday evening I went to the Midtown Comics located on Fulton Street (which would technically make it “Downtown Comics,” I guess) for the latest of their comic book creator signing events.  Midtown was having two artists from Madrid, Spain at the store to autograph copies of the latest issue of Blackhawks, one of the “New 52” titles from from DC Comics.  CAFU (short for Carlos Alberto Fernandez Urbano) and Bit became the art team on Blackhawks with issue #5.

To be honest, previously I had not been following Blackhawks, or really most any of the other New 52 series from DC.  The only two I’ve been reading month after month beginning with the first issue were Wonder Woman and Justice League International.  And even there, I’ve been seeing how each series has been from one issue to the next, sort of half-committed.  So Blackhawks definitely fell under the radar along with the rest of the New 52.  But when I heard that CAFU and Bit would be in town to sign issue #7, I picked up the previous two issues, which they also illustrated.

The event at Midtown was, in a certain respect, a bit of a disappointment.  The store had promoted it by announcing that each person who purchased a copy of Blackhawks #7 would be able to get a free sketch from both CAFU and Bit.  Unfortunately, the artists were only able to sign and sketch for one hour, from 6:00 to 7:00 PM, and they turned out to be drawing more slowly than the store probably thought they would be.  I think only the first six or seven people in line got a sketch.  I was not one of them.

Truth be told, I did not especially mind.  Yes, it was disappointing, but I shrugged it off because I was able to meet a couple of talented artists who only visit the States maybe once or twice a year.  I got several books autographed, including two issues of Marvel Adventures: Avengers that CAFU penciled in 2007.

Listening to some of the other people on line, though, I was amused at how big a deal it seemed to them.  Some people were of the attitude that they wasted their money (three whole dollars) and weren’t getting anything in return, that the book was no good, that Midtown was just doing this to drum up some sales on a title which is scheduled to be canceled in another month.  I think the lesson here is that if you are going to a comic book store signing, it should be for book that you are potentially interested in, or by a creator whose work you like.  That way, if you do not end up with a sketch, at least you will have still gotten an autographed book that will mean something to you.

I want to add that this is the first time I remember anything like this ever happening at Midtown Comics.  In the past, if they have promoted a signing to include sketches from artists, I don’t recall anyone walking away empty-handed.  So I just view this as a one-time occurrence.

Of course, maybe I am feeling charitable because at last year’s Spanish Inq signing event, when Bit was in NYC with Pere Perez, he drew a very nice sketch of Wonder Woman for me.  So I already had something by him in my sketchbook. 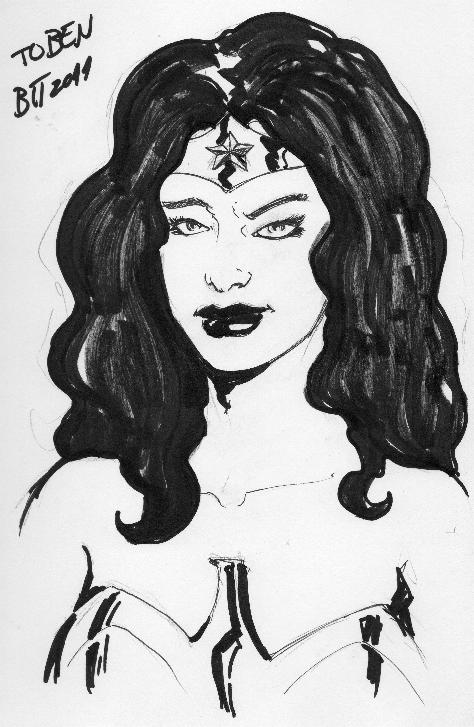 In any case, what do I actually think of the Blackhawks series?  CAFU and Bit’s artwork is stunning.  But, more to the point, I am impressed by Mike Costa’s writing.  It is not especially groundbreaking or revolutionary, but there is a fun and intelligence to it.  I like the idea of an international “black ops” type group of normal humans tasked with facing down technological menaces within the DC universe.  Judging solely by the three issues I have read, I feel the concept by Costa is sound and full of a great deal of potential, but perhaps the execution is lacking.  There is also an absence of details explaining who these characters are, and what exactly had taken place within the first story arc, which did not make them “new reader friendly.”  Having said that, I am intrigued enough that I am currently searching for copies of those initial four issues, to see what happened in them.

Blackhawks is being canceled with issue #8.  This is something of a pity.  As I said before, the concept holds much promise.  I like the characters, and if they survive the finale of the series it would be cool to see them resurface in some of DC’s other titles.  The art team of CAFU and Bit is really outstanding, and I look forward to seeing them receive another series to illustrate, hopefully soon.