I am sorry to report that another comic book creator whose work I enjoyed has passed on.  Frank McLaughlin was a talented artist whose career in comic books and comic strips lasted for nearly five decades, from the 1961 to 2008.   He passed away on March 4th at the age of 84.

McLaughlin, like a number of other comic book creators, got his foot in the door via Charlton Comics.  He was hired on to do a variety of production work for the Derby, Connecticut publisher.  In a 2016 interview McLaughlin recounted how he came to work for Charlton:

“All through my career, I have been blessed with the greatest of friends, beginning with a classmate at art school; Larry Conti. Larry hooked me up with his brother, Dan Conti, who was a department head at Charlton Press. Dan, in turn, introduced me to Charlton’s Pat Masulli, editor in chief of comics. Timing was perfect, because his assistant, Sal Gentile, was about to leave for Florida, in two weeks. I was hired on the spot, and Sal gave me an immediate ‘cook’s tour’ of the plant. It took me a few days for all this to sink in, but Sal was a terrific guy, and this made it easy for me to understand the job.”

During his time at Charlton, McLaughlin worked closely with fellow artist Dick Giordano.  If you look at McLaughlin’s work, especially his inking, you can see that Giordano was a definite influence.  Considering Giordano was an incredibly talented artist himself, one could certainly do worse than to draw inspiration from him.

McLaughlin had studied judo since he was 18 years old, and he drew on his martial arts experience to create the character Judomaster for Charlton.  Judomaster made his debut in Special War Series #4, cover-dated November 1965.  The next year an ongoing Judomaster series was launched, which lasted for ten issues. (Confusingly the issue numbers for Judomaster were #89 to #98, carrying on the numbering from the cancelled series Gunmaster. This was a common practice at Charlton.)  McLaughlin wrote, penciled & inked the entire ten issue run.

Unfortunately I am not especially familiar with McLaughlin’s work on Judomaster or the other Charlton “Action Heroes” titles from the 1960s, but judging by the artwork I’ve seen from it online he clearly did good work on it.  The cover for #93 (“Meet the Tiger!”) is especially striking.  I did recently locate copies of Judomaster #96 and #98 at Mysterious Time Machine in Manhattan, and I found them to be enjoyable, well-drawn comic books.

McLaughlin left Charlton in 1969 to freelance, and by the early 1970s he was regularly receiving work from both Marvel and DC Comics.  The majority of his assignments for the Big Two were inking the pencils of other artists.  It was actually via his work as an inker that I first became aware of McLaughlin, and developed a real appreciation for his art.

As a teenager in the 1990s I spent a lot of time attempting to acquire copies of every issue of Captain America published during the 1970s and 80s.  One of my favorite artists on Captain America was Sal Buscema, who penciled the series from 1972 to 1975.  Buscema was paired with several inkers during this four year run.  Reading those back issues during my high school & college years, I very quickly noticed there was something different, something special, about the work of one particular inker, namely Frank McLaughlin.

To my eyes, McLaughlin’s inks over Buscema’s pencils were really striking.  McLaughlin gave Buscema’s pencils kind of a slick polish.  I guess that’s how I would describe it.  As a non-artist, sometimes it’s difficult for me to articulate these things clearly.  Whatever the case, it looked great.

McLaughlin only inked Buscema’s pencils on six issues of Captain America, specifically #155-156, 160, 165-166 and 169.  I really wish he’d had a longer run on the title.  McLaughlin’s final issue, #169, was the first chapter of the epic “Secret Empire” storyline written by Steve Englehart.  The remaining chapters of that saga were inked by Vince Colletta.

I realize Colletta is a divisive inker, so I am going to put this in purely personal, subjective terms.  Speaking only for myself, I just do not think Colletta’s inks were a good fit for Buscema’s pencils.  As incredible as the “Secret Empire” saga was, I feel it would have been even better if McLaughlin had been the inker for the entire storyline.

Now that I think about it, when I was reading those Captain America back issues in the mid 1990s, and comparing Buscema inked by McLaughlin to Buscema inked by Colletta, and in turn comparing both to the other inkers who worked on that series the early 1970s, it was probably one of the earliest instances of me realizing just how significant a role the inker has in the finished look of comic book artwork.

McLaughin also inked Buscema on a few of the early issues of The Defenders, specifically #4-6 and 8-9.  Again, I wish it had been a longer run, because they went so well together.  In these issues the Asgardian warrior Valkyrie joined the team, and the combination of Buscema’s pencils and McLaughlin’s inks resulted in a stunningly beautiful depiction of the character.

I definitely regard Frank McLaughlin as one of the best inkers Sal Buscema had during the Bronze Age. 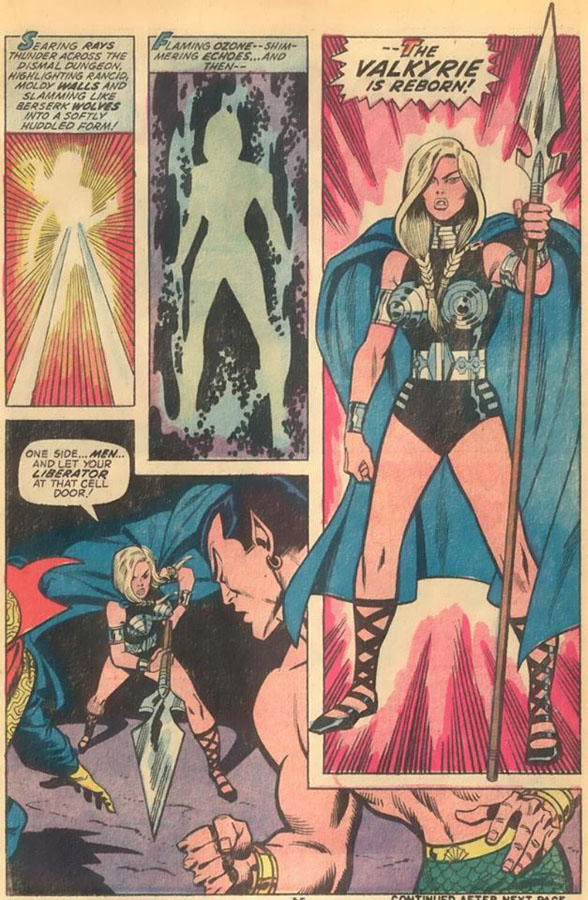 McLaughlin actually did much more work as an inker at DC Comics.  One of his regular assignments at DC was Justice League of America.  He inked issues #117-189, a six and a half year run between 1975 and 1981.

During most of McLaughlin’s time on Justice League of America he was paired with the series’ longtime penciler Dick Dillin.  Although I would not say that I am a huge fan of Dillin, I nevertheless consider him to be sort of DC’s equivalent of Sal Buscema.  In other words, much like Our Pal Sal, Dillin was a good, solid, often-underrated artist with strong storytelling skills who could be counted on to turn in a professional job on time.  I like quality that McLaughlin’s inking brought to Dillin’s pencils.  They made an effective art team.

Tragically, after completing Justice League of America #183, in March 1980 Dillin died unexpectedly at the much too young age of 51 (reportedly he passed away at the drawing board working on the next issue).  McLaughlin remained on for the next several issues, effectively providing finishes for a young George Perez’s pencil breakdowns, as well as inking over Don Heck and Rich Buckler. Nevertheless, as he recounted in a 2008 interview, he made the decision to leave the series:

“I did one or two issues, and then I said to Julie [Schwartz] “you know, I think I’d like to move on.” I was so used to what Dillin and I were doing together. I moved on and did a lot more other stuff.

“It was a good change of speed at the time, inking groups was fast becoming not a favorite–there’s too many people in there!”

Among his other work for DC Comics, McLaughlin inked Irv Novick on both Batman and The Flash, Ernie Chan on Detective Comics, Joe Staton on Green Lantern, and Carmine Infantino on the Red Tornado miniseries and the last two years of The Flash during the “Trial of the Flash” storyline.  He also assisted Giordano on several DC jobs during the mid-to-late 1980s.

McLaughlin’s last regular assignment in comic books was for Broadway Comics in 1996.  There he inked a young J.G. Jones on Fatale.

Between 2001 and 2008 he drew the Gil Thorpe comic strip.  In 2008 McLaughlin collaborated with his daughter Erin Holroyd and his long-time colleague Dick Giordano on The White Viper, a web comic serialized on ComicMix that was subsequently collected in a graphic novel in 2011 by IDW.

McLaughlin taught at both Paier College of Art in Hamden CT and Guy Gilchrist’s Cartoonist’s Academy in Simsbury CT, and he worked with Mike Gold on the instructional books How to Draw Those Bodacious Bad Babes of Comics and How to Draw Monsters for Comics.

In his later years McLaughlin did commissions for fans.  One of the characters he was often asked to draw was Judomaster, which all those decades later still had devoted fans.

Writer & editor Robert Greenberger, who worked at DC Comics from 1984 to 2000, wrote a brief tribute to McLaughlin on Facebook:

“I grew up on Frank’s work, first at Charlton then DC and Marvel. When I joined DC, he quickly welcomed me and was a font of stories.

“Frank was a gracious man, friendly, and willing to talk shop with eager newcomers, share tips with rising new talent, and lend a hand wherever needed.

“He was a workhorse of an artist, adaptable and reliable — two of the qualities desperate editors always welcomed. Even after I left staff, we’d run into one another at cons and it was picking up where we left off.

I fortunately had an opportunity to meet McLaughlin once at a convention in the early 2000s.  At the time I was regrettably unaware of his work for Charlton, but I did have him autograph one of the Captain America issues that he had so wonderfully inked.  I only spoke with him briefly, but he came across as a nice, polite person.