Yeah, it took me a while to get around to this… although fortunately not nearly as long as it took the Doctor to escape from the Confession Dial! 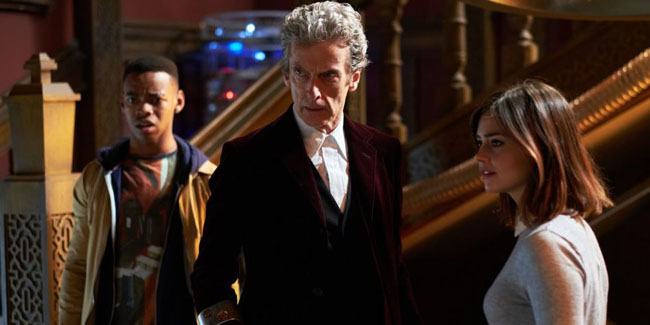 It was really nice to see the return of Rigsy (Joivan Wade), who was introduced last year in “Flatline.”  Our intrepid artist has gotten married and is now a father.  Unfortunately his past association with the Doctor and Clara has put a target on his back.

I expect that by the end of “Face the Raven” the Doctor (Peter Capaldi) had come to regret saving the life of Ashildr (Maisie Williams). Especially as Ashildr’s manipulations had once again gone awry, this time resulting in the death of Clara (Jenna Coleman).

I admit that the whole concept of the death mark tattoo being transferable from one person to another was awfully convenient.  The raven and the tattoos controlled by Ashildr were much too supernatural-type elements for my liking, as well.

Nevertheless, Clara did get a good, well-written death scene in “Face the Raven.” Coleman certainly played it very well.  The only thing that kept me from total shock & mourning was the fact that there were two more episodes left to Series Nine, and I was really left questioning if we had truly seen the last of Clara.

Aside from the Veil, the figure of death that incessantly stalks him throughout the “Heaven Sent,” the Doctor is the sole character in this episode. Peter Capaldi completely blew me away with his performance in this.  Casting him as the Doctor was such a masterstroke, and that is amply on display here.

I loved the insights into the Doctor’s character and his thought processes. It was interesting to see how his so-called miraculous escapes are really the result of him retreating into a mental space in his head (represented by the TARDIS console room) and working though all of the variables and possibilities.

The direction on “Heaven Sent” by Talalay was amazing. She previously did superb work last year on “Dark Water” and “Death in Heaven.”  It was great to have her back again to close out Series Nine.

Interesting fact: early in her career Talalay was a production assistant on the John Waters movie Polyester, and the producer of his next two films, Hairspray and Cry-Baby. So, yes, Talalay has worked with John Waters and directed Doctor Who, which officially makes her one of the coolest people ever.

4) Repetition is good for the soul

There was that moment towards the end of “Heaven Sent” when it’s finally revealed that the Doctor had been repeating the same sequence of actions over and over and over again, hundreds of thousands of times, as he attempted to break through that twenty foot thick wall, wearing it down ever so slightly, before dying each and every time. There’s that awful instant when you realize that every single one of those skulls at the bottom of the lake belongs to the Doctor, each one of them the result of another cycle, another death.  It’s a genuinely chilling moment.

How many times did the Doctor have to die and be reborn within the Confession Dial before he finally broke through that wall? It seems that it couldn’t have been more than a week for each sequence.  There are 52 weeks in a year.  The Doctor was imprisoned for approximately 4.5 billion years.  Very roughly speaking, that comes to 234 billion times.  And now my head hurts.

Mike Collins is the artist who storyboarded “Heaven Sent” and several other recent episodes. When trying to figure out how many times events had repeated for the Doctor, I e-mailed Collins to ask if he knew how long each go-round was.  He responded that he didn’t recall a specific length being mentioned in Moffat’s script.

In any case, Collins is a very talented artist who has been involved with the Doctor Who comic books for a number of years now. Given his obvious fondness for the series, it’s wonderful that he now has the opportunity to work on the actual television program.

While inside the Confession Dial, the Doctor refused to divulge what he knew of the Hybrid, the entity that “will unravel the web of time, and destroy a billion billion hearts to heal its own.” We discover in “Hell Bent” that the reason why the Doctor kept this knowledge was because he needed a bargaining chip, something with which to manipulate the Time Lords into providing  him an opportunity to rescue Clara.

And, yes, she’s back… sort of. Takes from an instant in time from right before her death, Clara is neither alive nor dead.  The Time Lords are afraid that an attempt to undo Clara’s demise, a fixed moment in time, has the potential to cause massive, horrific damage to reality.  But the Doctor, having spent literally billions of years pounding against a wall, is in no mood to listen.

In the end, the mystery of the Hybrid is more a McGuffin to propel the story along than it is a question to be answered. The Hybrid could be the Doctor, who might just be half-human after all.  Or perhaps it could be Ashildr, an immortal half-human, half Mire.  Ashildr herself, still alive at the very end of time, suggests another possibility, one did not even occur to the Doctor…

Ashildr: What if the Hybrid wasn’t one person, but two.

Ashildr: A dangerous combination of a passionate and powerful Time Lord and a young woman, so very similar to him. Companions who are willing to push each other to extremes.

The Doctor: She’s my friend. She’s just my friend.

Ashildr: How did you meet her?

Ashildr: Missy. The Master. The lover of chaos. Who wants you to love it too. She’s quite the matchmaker.

The Doctor: Clara’s my friend.

Ashildr: I know. And you’re willing to risk all of time and space because you miss her. One wonders what the pair of you will get up to next.

I’ve previously hypothesized that the Doctor and the Master were once very much alike, but over the centuries they developed in extremely different directions. Certainly it has been suggested on more than one occasion that the Doctor, if he is not careful, if he disregards morality and ethics, has the potential to become someone quite like the Master.

The Doctor Who novel The Dark Path by David A. McIntee was published in 1997. It revolves around an encounter between the Second Doctor and a fellow Time Lord, an old friend known as Koschei, the Master before he became the Master.  Koschei is at this point not evil, but he is arrogant, as well as quite ready to utilize violence as a first resort, rationalizing that the ends justify the means.  He is in certain respects much like the Doctor was when we first met him in “An Unearthly Child.”

Koschei’s carelessness accidentally causes the death of Ailla, a young woman who is traveling with him. Consumed by guilt, Koschei attempts to utilize an ancient artifact known as the Darkheart to rewrite history and undo Ailla’s death.  In order to do so, he uses the Darkheart to destroy the home planet of the Tereleptils, killing millions of sentient beings.  This horrifying act sets in motion further tragedies, all of which place Koschei on the path to becoming the Master. 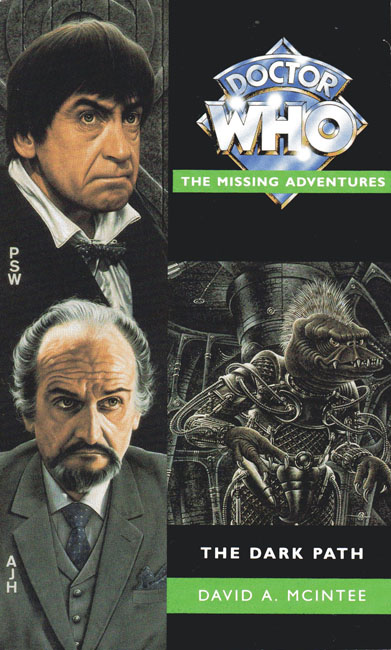 I do not know if The Dark Path is considered canonical, but it certainly offers an interesting possible explanation for how the Master came to be. And there are undoubtedly parallels between McIntee’s novel and Moffat’s script for “Hell Bent.”

The Doctor, the man who never carries a gun, uses one to shoot the General (who was actually more or less on his side up until that moment) in cold blood so that he can escape with the retrieved Clara. The Doctor argues that he didn’t really commit murder because the General is a Time Lord and that he will regenerate.  But that sounds like a very self-serving justification indeed.  Certainly the fact that the Doctor is willing to resort to violence, that he is ready to gamble on the stability of reality itself, and that he wants to wipe Clara’s memories in order to keep her “safe” all leaves her aghast.

Finally, seeing Clara’s reaction to everything that he has done, the Doctor is at last forced to step back and look at acknowledge just what he is doing, what he is becoming…

“Look how far I went for fear of losing you. This has to stop… I went too far. I broke all my own rules. I became the Hybrid.”

8) The restaurant at the end of the universe

I’m not sure how I feel about the idea of Clara and Ashildr traveling through time & space in a TARDIS stuck in the shape of a 1950s American diner. Obviously at some point Clara needs to return to Gallifrey so that she can be sent back to her proper time to die, allowing history to continue uninterrupted.  But that might be in five minutes, or five years, or five centuries.  That’s really open-ended.  Besides, the whole crisis caused by the Doctor’s actions was supposedly predicated on the notion that the longer Clara is removed from her timeline the more danger reality is supposed to be in.  And I’d hate to think that down the line someone uses all this as an opportunity to somehow undo Clara’s seemingly-inevitable death.

Still, it was pretty cool to see a TARDIS console room with the “default” setting, just as the Doctor’s own TARDIS originally appeared back in the early 1960s.

Anyway, however they turn out, Clara is now off on her own journeys. The Doctor has had his memory wiped of all the specifics of who Clara was.  So this appears to be the end of their time together, which is a good thing.  Coleman did a very good job portraying Clara, but the character was sometimes inconsistently written, which was frustrating.  And after three years I think many viewers are ready for a change.  Hopefully the Doctor’s next companion will prove to be very different.