In the second part of my look back at writer David Quinn’s run on Doctor Strange: Sorcerer Supreme, we pick up from the events of Annual #4.  As “Strangers Among Us” concluded, both Vincent Stevens and “Strange” had discovered that they were not true living beings, but mystical creations of Doctor Stephen Strange based upon aspects of his own personality.  Now both of them were slowly beginning to discorporate, and each was desperate to maintain his existence.  Stevens thought the solution lay in technology, whereas “Strange” believed that he and Stevens needed to merge together into one being.  Meanwhile, in the Dark Dimension, Clea was attempting to travel to Earth and reach Doctor Strange, in the hopes that he could aid her in quelling the mystic civil war engulfing her home.  She was unaware that her former lover had been infected with the energies of Salome, forcing him to take refuge in his new null space Sanctum Sanctorum.

In Midnight Sons Unlimited #6, we find Doctor Strange in the midst of assembling the “Forge” out of the numerous mystical items previously collected by “Strange” on his behalf.  Perhaps subconsciously sensing that Clea is making her way to Earth, Stephen Strange finds his thoughts drifting to his one-time student & paramour.  He relates to Sister Nil, his Lilin prisoner/ward, some of his past history with Clea.  The Doctor recounts three occasions when he and Clea encountered Verdelet, a scorned would-be lord of vampires who was passed over by his sire Varnae in favor of Dracula.  Their various encounters with this undead fiend through the years highlight the progression of their relationship.  Quinn does excellent work examining the couple’s shifting, developing roles over time.  In the first segment, Clea is very much the wide-eyed novice discovering a new world, in need of Doctor Strange’s guidance & protection.  In the second, they are teacher and pupil, with Clea honing her abilities by aiding Strange in his war against mystic menaces.  And in the third, we see them as equals, confidently working alongside one another.

Each of the flashback segments is illustrated by a different artist.  The first one, set early in Strange & Clea’s association, is  drawn by Marie Severin, one of the artists to work on the post-Ditko issues of Strange Tales in the late 1960s.  Appropriately enough, this tale seems to be set in that exact era.  Severin, who is probably best known for her work on Marvel’s self-parody title Not Brand Echh, adds a humorous touch to this tale of the undead via her colorful, off-the-wall depictions of the hippy counter-culture.

The second part also features work by a former Doctor Strange artist.  The super-talented Gene Colan drew the series throughout the 1970s.  He is inked here by Dave Simons, who previously embellished Colan’s pencils on Howard the Duck.  Making an appearance is Colan’s vampire-hunting co-creation Blade, who crosses paths with Strange and Clea as they engage in their second match with Verdelet.

Quinn returns to present-day events in Doctor Strange: Sorcerer Supreme #67.  Clea arrives on Earth and is shocked to discover that Stephen Strange’s Bleecker Street home is now a vacant lot.  Looking for clues to the Doctor’s whereabouts, she explores Greenwich Village disguised as a punk rock chick.  Finally, Clea realizes that her long association with and intimate connection to Strange allows her to reach out with her mystic senses to locate his new Sanctum.  The two are reunited, and each learns of the tragic circumstances that has befallen the other of late.  Clea understands that Strange is, at the moment, unable to help her.  As the spell that transported Clea to Earth fades and she returns to the Dark Dimension, each of them comes to terms with the need to go on alone in their respective quests.

Issue #68 is a fill-in written by Dan Abnett focusing on the two Strangers.  He does a nice job of getting into Vincent Stevens’ head, exploring his desire to continue to live.  Stevens may be immoral and unscrupulous, but he has still developed into a living, sentient being.  You can feel his anguish at his slow disintegration.  Abnett’s issue ties in very well with Quinn’s ongoing story.  It seems that editor Evan Skolnick did a good job coordinating the scripts of the two writers so that events would smoothly flow from one point to another.

Quinn returns with Doctor Strange #69 and, honestly, I think it is one of the strongest issues of his entire run.  Having been rejected once and for all by Stevens, a disoriented “Strange” is wandering about, desperately searching for another being to merge with.  “Strange” crosses paths with Polaris and Forge from X-Factor, en-route back to Washington after a conference on human/mutant affairs.  They are in the midst of arguing about the role of mutants in society.  Forge thinks it crucial that mutant-kind band together in a unified front to ensure their security.  Polaris, however, believes that different views ought to be expressed, and debate encouraged among mutants about what role they should play in the world.

“Strange” is drawn to Polaris as he senses that due to her status as a mutant she is an “outcast” much like him.  He wants to merge with her, making them both, in his mind, complete.  While they are fighting, Polaris slowly begins to comprehend that “Strange” is a being who wants to be accepted & understood.  Forge, however, perceives “Strange” as a threat, and attempts to destroy him.  Polaris’ first instinct is to chastise her teammate for rash action.  But when “Strange” abruptly reforms, she reacts with fear.  A disenchanted “Strange” flies off, telling Polaris to “remember your hypocrisy.”  And perhaps she comprehends for the first time the perspective of ordinary humans who fear and attack those that are different from themselves.

The guest art team of David Brewer & Pam Eklund do excellent work illustrating Quinn’s extremely compelling, thought-provoking plot.  And the issue is topped off by an absolutely amazing cover by Mark Buckingham. 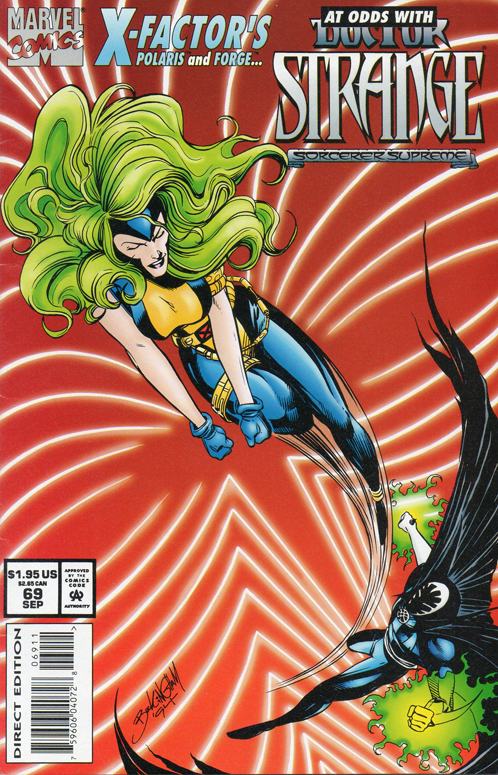 The quests by both Vincent Stevens and “Strange” to perpetuate their existences continues in issue #s 70-71, the two part “Half Lives.”  Stevens believes that he has finally found the solution via “techno-magick.”  He intends to use this to take over the form of the most powerful being on Earth, the Hulk.  He summons the green goliath to his Tempo skyscraper by masquerading as the real Doctor Strange… an appropriate enough thing to do, I suppose, since for the past several months people have kept mistaking Stevens for the Master of the Mystic Arts.

“Strange,” on the other hand, is drawn to the Hulk’s oldest friend Rick Jones, who also once shared his form with Captain Mar-Vell. “Strange” believes this makes Rick uniquely suited to merge with him.  Rick, on the other hand, has only just married his true love Marlo Chandler.  Looking forward to embarking on a new life with her, he certainly has no desire to go back to being one half of a composite entity.

The debate between Rick and “Strange” is abruptly interrupted when the Stevens-possessed Hulk crashes in, ready to destroy his aetheric “brother” as payback for weeks of harassment.  It seems Stevens is on track to do just that until Rick, who knows the Hulk all too well, uses psychology to make the gamma-spawned giant’s true personality angry, giving him the strength to reassert control.  Stevens’ consciousness is banished.  Desperate, Stevens claims that he has changed his mind and wishes to merge with “Strange.”  The two flee back to the Tempo, leaving the Hulk and Rick to try and sort things out.

While all this has been taking place, Doctor Strange has been in his Sanctum.  He has completed his Forge, and is now attempting to utilize it to channel the magick influence of the Earth itself, thereby gaining a new supply of power.  This, he hopes, will allow him to leave null space and take back the mantle of Sorcerer Supreme from Salome.

At the same time, the Doctor is ready to just casually stand back and allow “Strange” and Vincent Stevens to “dissolve naturally.”  He seems unaware, or unwilling to admit, that the two Strangers have become independent entities, clinging tenaciously to life.  So, despite his vow to no longer treat “those who trusted me like mere chess pawns,” Doctor Strange is as yet unwilling to accept the consequences of his creating the Strangers.  Quinn ably demonstrates this glaring moral blind spot in the Doctor’s philosophy.  It is one the writer will examine in-depth in his next four issues.

Closing out #71, we finally catch a glimpse of Salome, who has been absent the past several issues.  Still searching for Doctor Strange, the mad sorceress contacts the Vishanti.  Salome offers up her services to these cosmic beings in exchange for the power to destroy Strange, the man who previously rejected them.  Thus is the stage set for the final confrontation between the two. 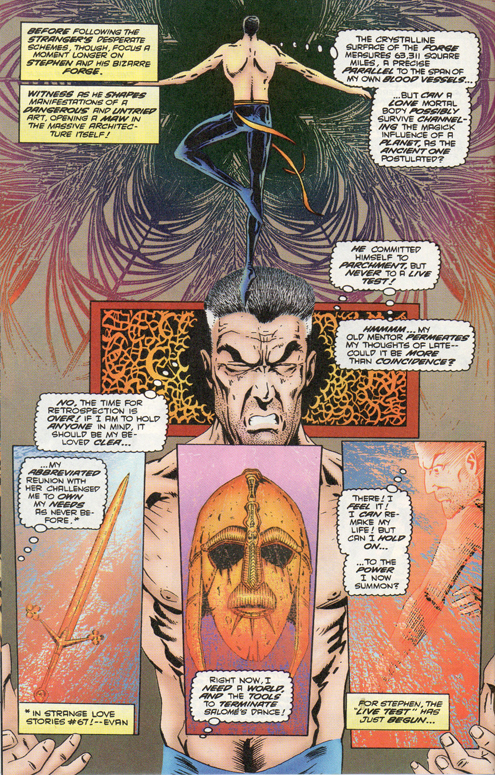 “Half Lives” features the debut of the new regular artist on Doctor Strange: Sorcerer Supreme.  Peter Gross had worked on Dr. Fate and Books of Magic for DC Comics / Vertigo, as well as Hellstorm for Marvel itself.  That made him well suited to draw another mystical-themed title such as this.  I do think the more traditional superhero action elements in these two issues with the Hulk do perhaps come out a bit awkward.  However, Gross does amazing work on the much more bizarre and esoteric sequences featuring Doctor Strange and Salome.  The scenes of Strange in the Forge Canal are really eerie, containing a surreal quality.  As we will see, Quinn’s upcoming “Last Rites” arc will definitely play to Gross’ strengths as an artist.

In part three, we will be taking a look at the final portion of David Quinn’s work on Doctor Strange, as featured in issue #s 72-79.