As I may have mentioned before, I really have not been much of a fan of DC Comics’ much hyped New 52.  There were a few series that I liked, but all of them ended up getting canceled.  The only exception is Wonder Woman by Brian Azzarello & Cliff Chiang, which continues to be an excellent read (I really should do a full length post on that soon).  Other than that, though, nothing else has really caught my attention.  But I may pick up Ann Nocenti’s work on Catwoman and Katana when it receives the trade paperback treatment.

So when DC’s whole month-long line-wide Forever Evil crossover rolled around, I had no interest in it.  I did end up picking up four or five of the tie-in issues due to the specific characters or creators involved, and even then nothing especially stood out.  And among those few there was one major disappointment: Justice League #23.1, aka Darkseid #1.

Those who follow this blog will remember that I am a huge fan of Jack Kirby, especially his amazing work on the “Fourth World” titles.  While I do not think any subsequent creators have been nearly as successful in their handling of the New Gods as the man who created them, there have nevertheless been some very good stories featuring them written by such individuals as Walter Simonson, John Ostrander, John Byrne, Paul Levitz and Jim Starlin.  And in the New 52, Azzarello & Chiang have come up with interesting takes on Orion and Highfather in the pages of Wonder Woman.  So I was curious to read Darkseid #1, which presents the New 52 origin of the lord of Apokolips. 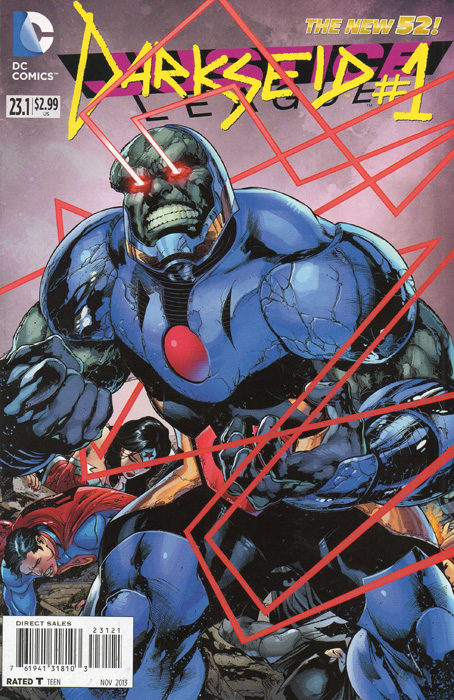 There was actually some potential to “Apotheosis,” which is written by Grek Pak.  It starts off quite well.  We see that ages ago in another dimension, Darkseid was once a humble farmer named Uxas.  He lived on a world where a pantheon of titanic deities regularly wrecked havoc, brawling across the landscape with seemingly no regard for the tiny mortals at their feet.  Unlike his sister Avia and brother-in-law Izaya, Uxas recognized that these gods were oblivious to the plight of their subjects, and they cared not who was killed during their battles.  Uxas is clearly a man who feels wronged, who resents these gods, and who wishes to gain the power to control his destiny.  It’s an intriguing stepping-on point to understanding what drives Darkseid.

Unfortunately things then get confusing.  We see Uxas climbing the mountain of the gods and, while they are asleep, whispering in their ears that they should go to war.  Then he sits back and watches them nearly destroy one another and, once they are helpless, Uxas comes up to them and slays them all, stealing their power, in the process transforming into Darkseid.

At this point it really felt like this issue had skipped by a whole bunch of stuff.  Everything flies by so quickly.  Uxas’ manipulation and slaying of the gods seems to take place much too easily.  I know I often criticize modern comic books for their decompressed nature.  But this issue is the opposite problem: it felt like a three or four issue story crammed into 20 pages.

In any case, Izaya and Avia approach the last of the gods, praying for his help.  And even though these cosmic beings previously seemed to be completely unaware of their worshipers, suddenly the fallen “lord of the sky” rewards the dying Avia for still having faith by transforming her husband into Highfather.  The empowered Izaya futilely tries to reason with Darkseid.  They fight, and their world is destroyed. 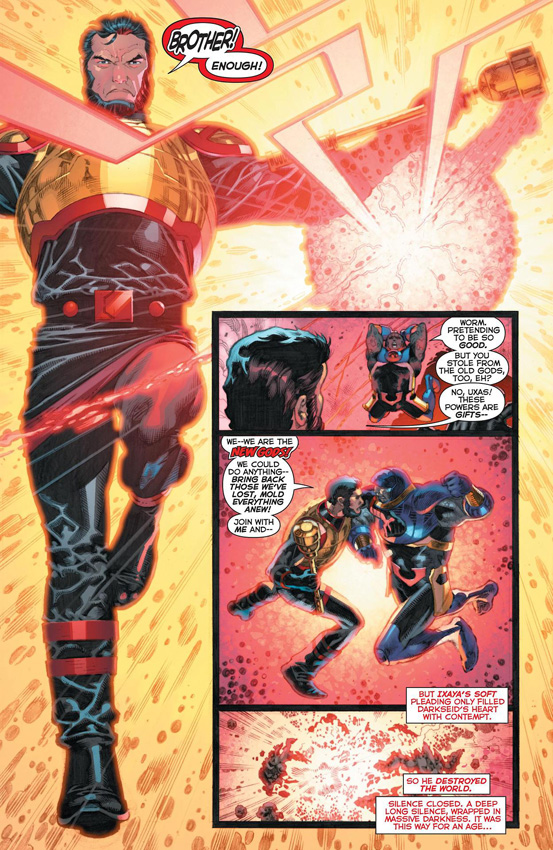 The story abruptly fast forwards to Darkseid in place as the iron-fisted ruler of Apokolips, planning his conquest of other dimensions.  And some other stuff happens that I think ties in with past issues of Justice League and Earth 2, but I’m not completely certain.  Again, this sudden lurch in time really feels jarring.

I’ve read other comic books written by Pak, and he is usually much better than this.  I cannot help wondering if the bare bones of Darkseid’s story were handed to him by someone like Dan DiDio or Geoff Johns and he was given this single issue to try and flesh them out.  Whatever the case, the results are frustrating and disappointing, as we get snapshots, glimpses of what could have been a memorable story.

I’m sorry, but I just cannot help comparing this to Jack Kirby’s own work.  Maybe I am being unfair.  But just take a look at New Gods #7, “The Pact,” which he wrote & penciled back in 1971.  In the space of a mere 24 pages, Kirby recounted the origins of the longstanding war between Apokolips and New Genesis, in a tale that contained both epic cosmic conflicts and deeply personal moments. 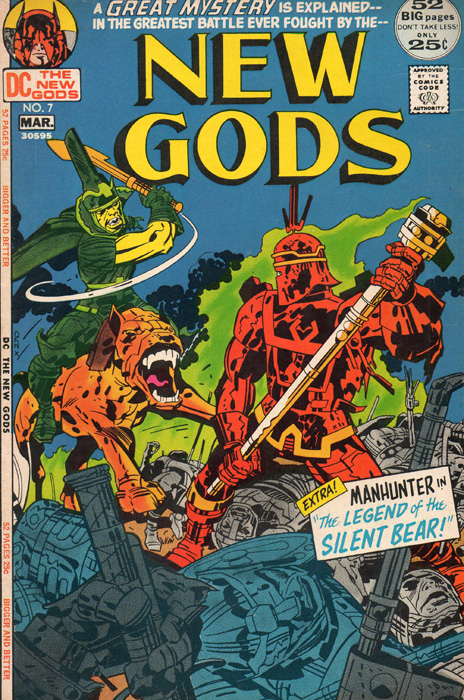 In contrast, we have the just published Justice League #23.1, which, despite being given nearly the same page count as New Gods #7, just barely manages to begin exploring the origins and motivations of Darkseid and Highfather.  I really do not want to sound like a grumpy old man (I’m only 37 years old) but they really do not make comic books like they used to.

Oh, well, at least the artwork on Justice League #23.1 is quite good.  I am completely unfamiliar with Paulo Siqueira and Netho Diaz.  But they do a very nice job capturing the awesome, cosmic nature of events.  The coloring by Hi-Fi is vibrant.  As for the cover, the super-talented Ivan Reis draws an extremely striking portrait of Darkseid.

As I said before, I actually feel like “Apotheosis” could have been much better.  But it feels like someone dropped the ball along the way.  I don’t know, maybe most of the criticisms I’ve leveled at this issue are indicative of the larger problems plaguing DC as a whole over the last few years.  This is probably why I read so little that is published by them nowadays (or by Marvel, either, for that matter).

Yes, there are many very good comic books being published nowadays.  You just have to look beyond DC and Marvel to find the majority of them.  Yeah, it’s definitely disappointing to see Kirby’s characters & concepts handled in such a sloppy manner by DC.  But, whatever, rather than dwell on that, I’m just going to look for the interesting, original work being done by other creators elsewhere.