I’m sure that most everyone has heard the news that Archie Andrews, the popular redheaded star of the line of Archie Comics, has died… sort of.  That is to say, one version of Archie (okay, technically speaking two versions) is killed in the conclusion to the three year epic Life With Archie.  Running monthly since 2010, Life With Archie, written by Paul Kupperberg, chronicled two possible near future realities, one where Archie married Veronica and another where he married Betty.

The series actually spun out of a six issue run by writer Michael Uslan and artists Stan Goldberg & Bob Smith in Archie #s 600 to 605.  Uslan postulated two possible scenarios where Archie finally chose between his rival teenage sweethearts.  In the first one, which ran through #600 to 602, Archie proposed to and married sophisticated raven-haired socialite Veronica Lodge.  In the second one, in #603 to 605, Archie pledged his heart to sweet blonde girl-next-door Betty Cooper.  The entire storyline was collected in the trade paperback The Archie Wedding.

Following the success of this storyline, Archie Comics decided to publish an ongoing title set in these two alternate worlds.  In the pages of Life With Archie, Kupperberg and a line-up of talented artists chronicled the dual paths that Archie took in “Archie Marries Veronica” and “Archie Marries Betty.”  Kupperburg’s two tales were sprawling and ambitious.  He revealed how that one simple decision impacted the entire town of Riverdale and its much-loved inhabitants as they grew older, setting everyone on very different paths in these two realities.  It brings to mind the old saying about how a small pebble dropped in a lake will cause ripples that will emanate outwards and bounce off the shores in various directions.  By choosing Veronica in one world and Betty in another, Archie creates two very different sets of ripples that affect the rest of the cast in dramatic & unexpected ways.

My girlfriend Michele has been a fan of Archie Comics since she was a little girl.  She picked up the collection The Archie Wedding and enjoyed it.  When Life With Archie began shortly afterwards, she became a regular reader, only missing a handful of the issues over the next three years.  I read a number of these and I also enjoyed them.  Truthfully, I sometimes had some trouble following the story and character arcs in the two parallel worlds, and more than once I wondered aloud at how Kupperberg kept everything straight in his head.  Maybe he had some flowcharts or diagrams that he drew up?

A good example of how events could be both similar and different in these two worlds is with the character of Jughead Jones.  In each of them, not surprisingly, he ended up becoming the proprietor of his favorite hangout, the Chocklit Shoppe.  However, in one reality circumstances eventually lead Jughead to wed Ethel, and in the other he and Midge are married. 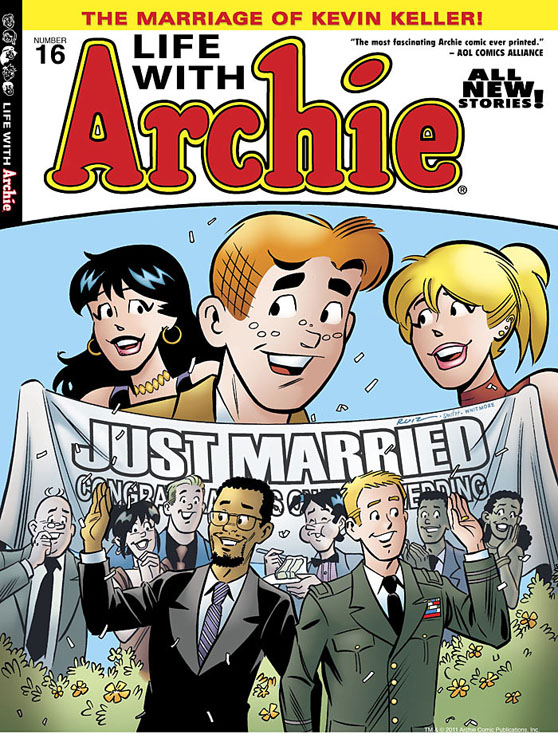 One event that took place in both realities was Kevin Keller, now a military veteran, married his boyfriend Clay Walker in Life With Archie #16.  The two had met after Kevin had been wounded on the battlefield and Clay was his physical therapist.  There was, unfortunately, somewhat of an uproar in the real world among certain “conservative” segments when the news of this was announced.  However, to their credit, Archie Comics still went through with it.  I certainly do not agree with every business decision that the company has made over the years.  But at least they seemingly do have an approach that can be considered “progressive,” and they recognize they possess a diverse readership.  In any case, it was a very nicely done issue, topped off with a lovely cover by Fernando Ruiz & Bob Smith.

An aspect of the series that I found intriguing was the role of Archie’s former rival Reggie Mantle.  In the “Archie marries Veronica” reality Reggie begins dating Betty.  In the “Archie marries Betty” world Reggie becomes involved with Veronica.  It is a bit sad to think that Reggie, who in both storylines is seen growing & maturing beyond his former snooty, sarcastic self, is left with the girl who Archie let get away.  The four of them really do have something of a bizarre love quadrangle going on.

There were also some odd shenanigans going on with scientific genius Dilton Doiley traveling back and forth between the two realities.  I really didn’t follow the series close enough month-to-month to fully understand precisely what was going on.  However, aside from that one subplot, Kupperberg eschewed from fantastical elements and stuck to events that were grounded in reality.

Art-wise, it was interesting and cool to see Norm Breyfogle’s work on a number of issues of Life With Archie.  Breyfogle is generally considered to be the best Batman artist of the late 1980s through the mid 1990s.  He did really amazing work on the various ongoing titles and specials of that time.  Unfortunately since then Breyfogle’s work has been somewhat sporadic, as he has not really had too many ongoing books to work on.  More recently he’s once again been doing great work for DC Comics on Batman Beyond.  Before that gig finally came his way, Breyfogle was working at Archie Comics.  I really enjoyed his art on Life With Archie.  It was a very nice, effective blending of the company’s house style and his own unique, signature look.

The last several issues of Life With Archie have boasted some really great variant covers by several great artists, including Stephanie Buscema, Dean Haspiel and Robert Hack.  One of my favorites was Chad Thomas’ “sci fi variant” for #35, which depicts Jughead as “The Beast That Won’t Stop Eating!” 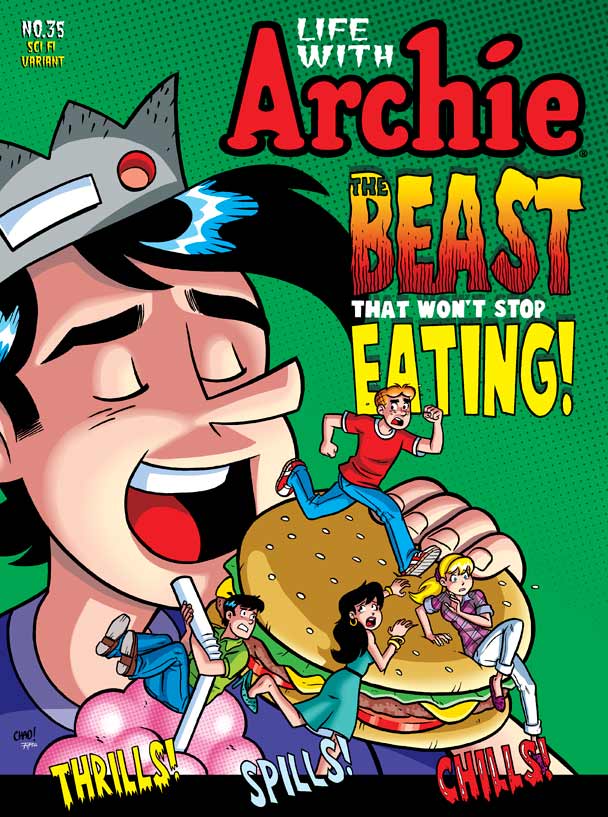 Having taken a cursory overview of the entire Life With Archie series, in my next installment I will be looking at Paul Kupperberg’s two part conclusion to his dual sagas, and the tragic demise of Archie Andrews, as featured in issue #s 36 and 37.  Stay tuned!