Welcome to the seventh edition of Super Blog Team-Up! This time, to celebrate the release of The Force Awakens, all of the participating bloggers will be writing about various aspects of the Star Wars phenomenon.  This ties in very well with what I’ve been doing on my own blog.  For the last few months I’ve been writing reviews of my favorite entries in the Star Wars expanded universe.

For my contribution to SBTU 7 I’m glancing through the Star Wars theme sketchbook that I started in 2003. In the last 12 years I’ve obtained incredible sketches & commissions from a number of very talented artists.  There are so many great pieces that I had genuine difficulty deciding which ten I should include here.  I would have featured more, but then this post would have been much too long!

June Brigman has a charming style to her work that I have always enjoyed. With her husband Roy Richardson she illustrated the Star Wars miniseries River of Chaos which featured Princess Leia.  June also did a cute trading card of Leia with the Ewoks for the first Star Wars Galaxy set from Topps.  She’s also drawn illustrations for a few SW young adult novels.  It was an obvious choice to ask June to draw Princess Leia in my sketchbook.  She did a really wonderful job!  The backgrounds on this commission remind me a bit of the SW work of legendary artist Al Williamson. 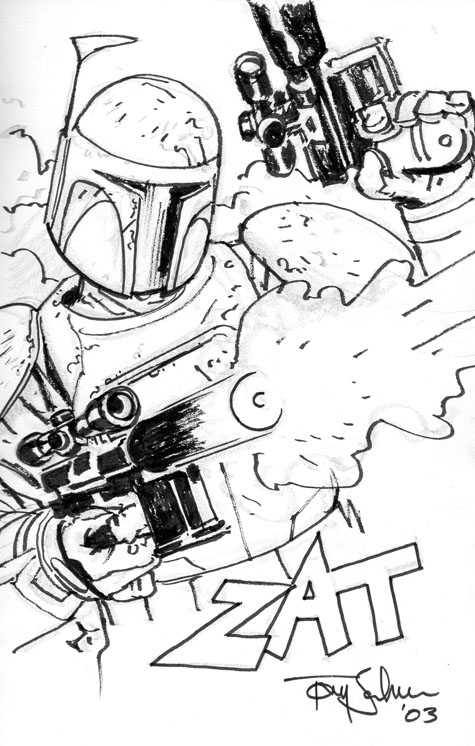 Tony Salmons penciled “Wookiee World,” issue #91 of the original Marvel SW comic book series. At first I was going to ask Salmons if he’d draw Chewbacca.  But I thought Salmons might prefer to tackle another character.  I asked him who else he’d enjoy drawing.  He suggested Boba Fett.  That was a great idea.  Salmons had a lot of fun drawing the bounty hunter, and it shows.  I love that “ZAT” sound effect. 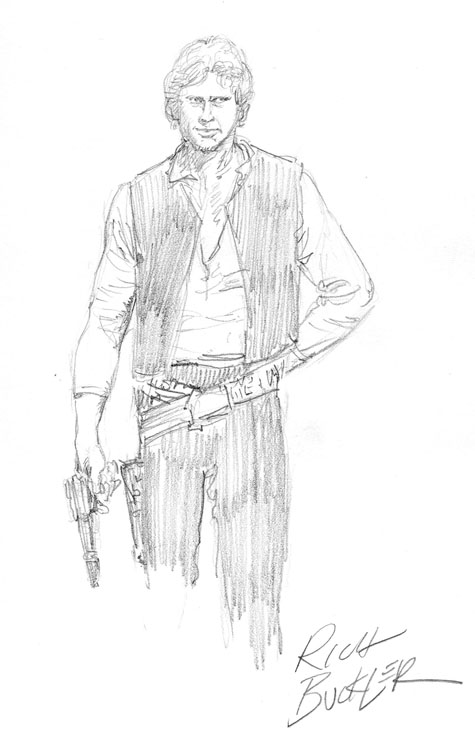 Rich Buckler has a very bold style, influenced by Kirby. I thought Buckler he’d be perfect to draw either of the action heroes from the first movie, namely Han Solo and Luke Skywalker.  I asked Buckler who he’d prefer, and he immediately chose Han.  Buckler did an amazing job at capturing Harrison Ford’s likeness.  Buckler’s only published Star Wars art was the Lando Calrissian trading card he drew for the Galaxy series two set from Topps. That’s definitely unfortunate.  This sketch shows that he’s perfectly suited to the material.  I would really enjoy seeing him do further SW work. 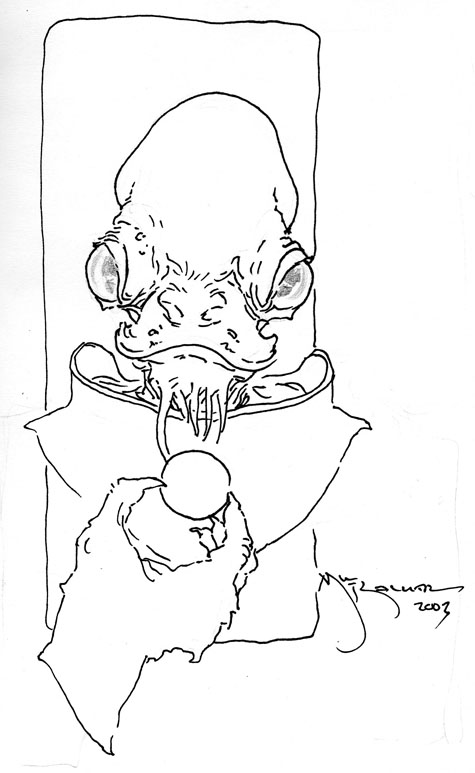 Michael Kaluta previously did an imaginative rendering of Ackbar for the first Star Wars Galaxy trading card set. When I began this sketchbook, I hoped to eventually have Kaluta draw that character.  Kaluta was generous enough to agree to it, with impressive results.  Note that he rendered Ackbar’s pupils in pencil to convey a watery, “fish-eye” look.  It’s that attention to detail that makes Kaluta such an incredible artist.

I suppose you can lay the “blame” for this one at the feet of fellow Star Wars sketch collector John Higashi. He obtained a nice sketch of Tarkin from Gotham Central artist Michael Lark.  When I later met Lark at a convention I asked him if he would be willing to draw that character again.  Lark felt it would be more fun to draw one of the Sand People on a Bantha, and asked me if that was okay.  I decided to let him go for it, and Lark produced this very impressive illustration.  It’s interesting to see Lark, who often works on noir-themed stories, illustrate sci-fi material. 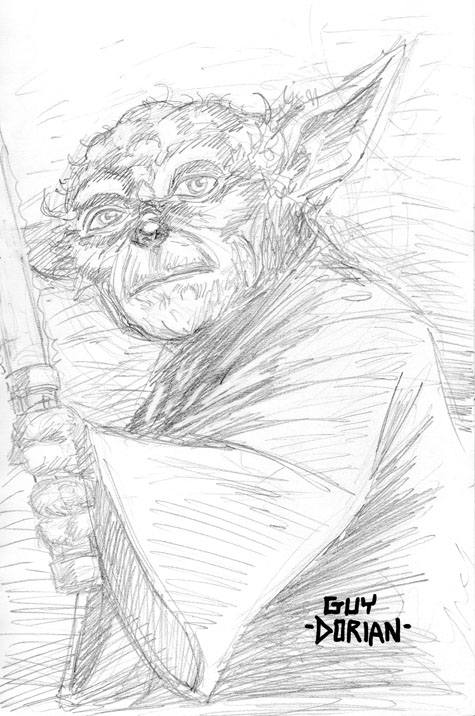 Guy Dorian saw a scan of a Star Wars sketch his brother Ian had done for me, and he e-mailed to say he wanted to contribute one too. Guy told me that he’d worked on a SW coloring book several years earlier, and so had drawn a number of the characters before.  A few months later at the next Big Apple Comic Con, I stopped by Guy’s table with my sketchbook.  Guy told me he was interested in drawing Yoda.  He spent a fair amount of time working on this.  As you can see, there’s some very detailed linework to this piece.

Paul Azaceta was at the 2007 New York Comic Con to promote the release of the trade paperback collection of the Grounded miniseries he drew for Image Comics. He was also doing a lot of sketching at the show.  An incredible drawing of Johnny Depp from Pirates of the Caribbean that was sitting on his table immediately caught my eye.  Seeing that, I asked Azaceta if he’d be able to draw something in my SW sketchbook.  He agreed, and produce this stunning rendition of the malevolent Emperor.

When getting SW sketches, some artists are understandably uncertain if they’ll be able to do good likenesses. In his Comic Art Fans gallery Jim Webb has posted a scan of advertising art he did for the board game Stratego that had the characters from the sitcom 3rd Rock from the Sun. I figured if Jim could draw a good likeness of John Lithgow, I might as well ask him if he’d have a go at sketching Samuel L. Jackson in the role of Mace Windu. After Jim agreed to do a commission for me, I said something along the lines of “Maybe you can have him fighting a snake as a nod to Snakes on a Plane.” That’s how we got this epic struggle. A long time ago in a galaxy far far away, one very frustrated Jedi Knight is shouting “I have had it with these mother@#&%ing snakes on this mother@#&%ing spaceship!”

I saw Jan Duursema at the November 2002 Big Apple show where she was drawing some amazing convention sketches of Star Wars characters. That was what inspired me to start this theme sketchbook in the first place.  One of my goals was to get a sketch by Duursema. Well, it took some time, but I finally met her again at the 2009 New York Comic Con.  I asked Duursema to draw Aayla Secura, the very cool character she created with John Ostrander for the Dark Horse comic books.  Fortunately, I just managed to get onto Jan’s sketch list, and she drew this on Sunday afternoon.  It turned out great.  So, yes, it was worth waiting six and a half years for this after all.

Jodi Tong is a talented artist with a really fun style.  Every time I get a new sketch from Jodi it’s inevitably better than the last one. She did an amazing job on this drawing of Shaak Ti, one of the Jedi from the prequels who was featured prominently in the Dark Horse comics.  There’s so much detail to this piece.  I’m hopeful that I’ll have an opportunity to obtain more sketches from Jodi in the near future.

I hope everyone will check out Comic Art Fans to see the rest of my Star Wars sketch collection. There are some really great pieces. 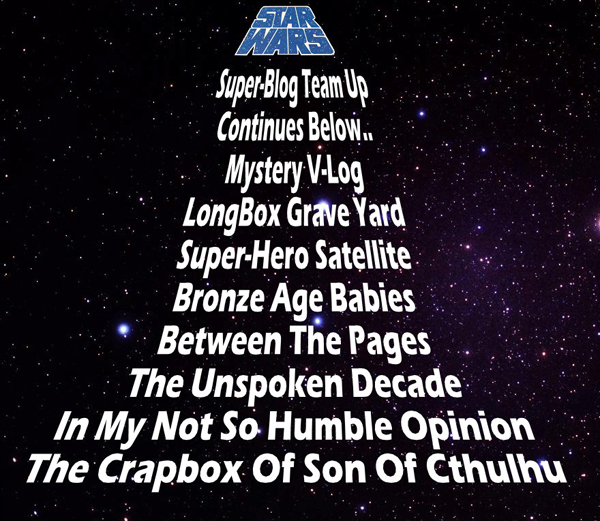 Here are the links to the other Super Blog Team-Up 7 contributors.  You will not find a more wretched hive of scum and villainy…