The challenge by Comic Book Historians group moderator Jim Thompson: Pick a subject and find a different artist every day for that subject.

I chose “coffee” for my subject.  From the work of how many different artists can I find examples of people drinking coffee?  I guess we will just have to see.  I posted these daily on Facebook, and now I’m collecting them together here.  (Please click on the “coffee” tag to read the previous parts of the series.)

April 26th was the birthday of artist Kerry Gammill.  On that day I showcased two pages Gammill penciled from his well-regarded run on Power Man and Iron Fist for Marvel Comics in the early 1980s, where he was paired with writer Jo Duffy.

The first page is from Power Man and Iron Fist #63, cover-dated June 1980.  Gammill is inked here by Ricardo Villamonte.  Gammill and Villamonte made a great art team, and did an excellent job rendering Duffy’s stories.  Here we see Luke Cage, woken up by renovations at the Gem Theater, a second-run movie house in pre-gentrification Times Square, gratefully accepting a cup of coffee from the Gem’s manager, film student D.W. Griffith.

The second page is from Power Man and Iron Fist #71, cover-dated July 1981.  The inking credits for this issue are “D.Hands” which is short for Diverse Hands.  Presumably this issue fell victim to the Dreaded Deadline Doom, and several different people inked it.  The Grand Comics Database credits Vince Colletta for several pages, including this one.  It certainly looks like his work.

Following a disastrous date with Harmony Young, a brooding Luke Cage finds himself having an early morning cup of joe at Eddy’s, “an all-night diner, where the service is poor and the coffee more bitter than his own angry thoughts.”  A scowling Cage considers his coffee and thinks “Man, no one should have to pay for anything this bad.”  Reminds me of all the times I got coffee at some local bodega where the pot must have been sitting on the burner for at least a couple of hours!

Gammill does excellent work on both these pages.  He effectively renders Cage going through very mundane tasks: drinking coffee, shaving, getting dressed, paying a bill.  Gammill’s layouts, as well as the body language he gives to Cage, provide valuable elements of characterization that work effectively in conjunction with Duffy’s script.

Seeing these two pages side-by-side is an excellent illustration of the important role the inker plays in the look of the finished artwork.  Villamonte gives Gammill’s pencils a rich, illustrative look that is very different from what Colletta’s feathery ink-line brings to it.

I was too young to read these issues when they first came out.  I sort of regret that, because it must have been a real pleasure to get these comic books in real time, and each month read the latest adventure of Luke Cage, Danny Rand, Misty Knight & Colleen Wing, which Duffy, Gammill, Villamonte and friends chronicled with a wonderful mixture of action and humor.  Having said that, I do appreciate that I’ve been able to pick up some of these as back issues, and that most of the run has been collected into trade paperbacks.

Savage Dragon is a labor of love on the part of Erik Larsen.  The Dragon was originally created by Larsen in his teenage years, and was the star of his earliest self-published comic books in 1982.  A decade later when Larsen co-founded Image Comics the Dragon was his flagship character.  Savage Dragon made its debut as a three issue miniseries, followed by an ongoing title in 1993.

Larsen has Savage Dragon take place in real time, meaning all the characters age.  He has also regularly changed the status quo.  Dragon started out as a Chicago police officer.  He then became a government agent, and following that was a bounty hunter.  A huge change took place in #75.  Dragon attempted to alter history by killing his time traveling adversary Darklord.  As a result Dragon was shunted onto a parallel world, one where his enemies had taken over the world.  Twenty-five issues later Dragon finally defeated them, and located this reality’s version of his wife Jennifer Murphy and her young daughter Angel.

“Shattered Planets, Shattered Lives” sees Dragon, Jennifer and Angel at the diner, with attempting to explain exactly what has transpired:

“I’m the real guy! I’m really Dragon — I’m just not the SAME Dragon. YOUR Dragon was killed by a villain named Darklord and our minds were swapped. I’m from a different dimension.”

Not surprisingly, both Jennifer and Angel have no idea what to make of this crazy story.  Given how headache-inducing this whole conversation must be, it’s no wonder Dragon is having coffee which, as we see here, he takes with cream “and enough sugar to fill a bathtub.”

I’ve been a HUGE fan of Savage Dragon since the first issue of the miniseries came out in 1992, and I’ve been following in regularly for 28 years.  Larsen has written & drawn some really exciting, weird, and funny stories in his series.

In 1996 Dragon’s son Malcolm was born.  Over the next 24 years Malcolm grew into a child, a teenager, and finally an adult.  Three years ago the original Dragon was killed off permanently by Larsen, and Malcolm Dragon became the new series’ star going forward.

Two thumbs up to Jim “1000 Horses” Thompson for suggesting this one.  “Des barbelés sur la prairie” drawn by Morris, real name Maurice de Bevere, and written by René Goscinny, originally saw print in Spirou, a weekly comic book anthology published in Belgium.  This is from the first chapter of the serial, which ran in Spirou #1411, cover-dated 29 April 1965.

The serial was collected in Lucky Luke #29: Des barbelés sur la prairie, published in 1967 by Dupuis.  It finally appeared in English in 2007, released by British publisher Cinebook as A Lucky Luke Adventure #7: Barbed Wire on the Prairie.

This is where I acknowledge my appalling lack of knowledge about non-English language comic books.  I had not previously heard of Lucky Luke.  After it was pointed out to me by Jim, an online search revealed it to be a long-running comedic Western starring gunslinger Lucky Luke and his horse Jolly Jumper, the smartest horse in the world.  Barbed Wire on the Prairie sees Lucky Luke aiding a group of farmers against ruthless rancher Cass Casey, who tries to steal their land for his cattle herds.

On this opening page Goscinny and Morris discuss the lifestyle of the cowboys, including their dining habits:

Narrator: The cowboys fed themselves along the trail thanks to mobile kitchens called “chuck wagons” whose chefs had a strange understanding of gastronomy…

Chef: To make good coffee, you put a pound of wet coffee in the coffeepot and boil it for half an hour. Then you throw in a horseshoe. If the horseshoe doesn’t float, you add some more coffee.

I enjoy the Comic Book Historians group because it can be incredibly informative. I’ve definitely learned about quite a few creators and series here, such as Morris and his creation Lucky Luke.

That and I also learned a new way to prepare coffee! Anyone here got a horseshoe I can borrow? 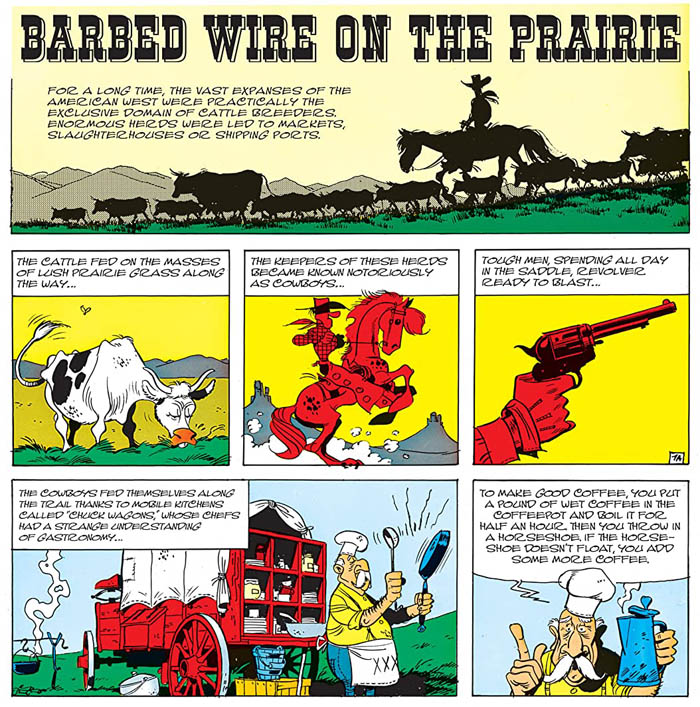 A great many words have been written over the past three decades concerning Watchmen, the 12 issue deconstruction of the superhero genre by Alan Moore & Dave Gibbons.  It is indeed an incredibly rich text.  Watchmen is, for better or worse, one of the most influential comic books ever created.

So instead of reiterating what has been said before, I’m going to focus solely on this page, which features Dr. Malcolm Long, the psychiatrist who has been assigned to the incarcerated Rorschach.  At first Long is enthusiastic about the case, believing that he has an opportunity to make his name by successfully treating the notorious vigilante.  Long soon comes to realize just how disturbed and intractable Rorschach genuinely is, and the psychiatrist finds himself being pulled into the abyss of insanity and darkness that has transformed Walter Kovaks into a faceless fanatic.

Here we see an already-consumed Long burning the midnight oil, fueled by caffeine, futilely attempting to solve the mad, jumbled puzzle that is Rorschach’s psyche.  This is nine panels of a man sitting at a desk drinking coffee, writing in his journal and arguing with his wife, and Dave Gibbons draws the heck out of it.  Via his layouts, the angles and positioning of the compositions within the nine panel grid, Gibbons renders what could be an otherwise-mundane scene with genuine mood and drama.

I have found in re-reading Watchmen I have discovered not just previously-unnoticed layers to Moore’s writing, but a much greater appreciation for Gibbons’ superb artwork & storytelling. 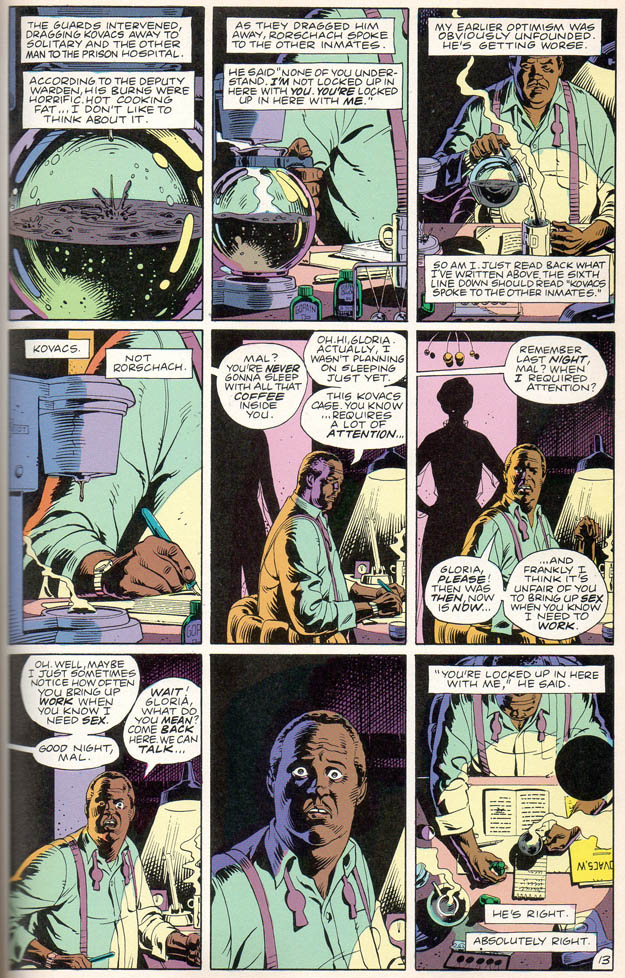 The work of Bronze Age legend Jim Aparo is showcased in today’s entry.  “Scars” is drawn by Aparo, written by Gerry Conway, colored by Adrienne Roy, and edited by Al Milgrom, from The Batman Family #17, published by DC Comics with an April-May 1978 cover date.

Jim Aparo is considered by many to be one of the all-time great Batman artists.  So it was entirely appropriate for Aparo to draw this first meeting between the Batman of Earth-One and the Huntress, who is the daughter of the Batman and Catwoman of Earth-Two.

Helena Wayne has crossed the dimensional barrier to meet this counterpart Dark Knight.  Over coffee with Batman and Robin she explains that she is seeking advice on pursuing a career as a costumed crimefighter.  She does not feel she can confide in her father, so she has come to the Bruce Wayne of Earth-One, who is literally the next best thing.

This story and the second one in this issue, a team-up of Batgirl and the Huntress against Poison Ivy and Catwoman written by Bob Rozakis and drawn by Don Heck, make use of the idea that it really would be weird and unnerving to find out there was a parallel world that was almost the same as yours.  Imagine meeting the counterparts of your loved ones, identical in some respects, yet very different in others.  Conway and Rozakis both do a good job with the concept.  That’s especially the case when Helena, the memories of her mother’s recent tragic death still fresh, encounters the Catwoman of Earth-One. 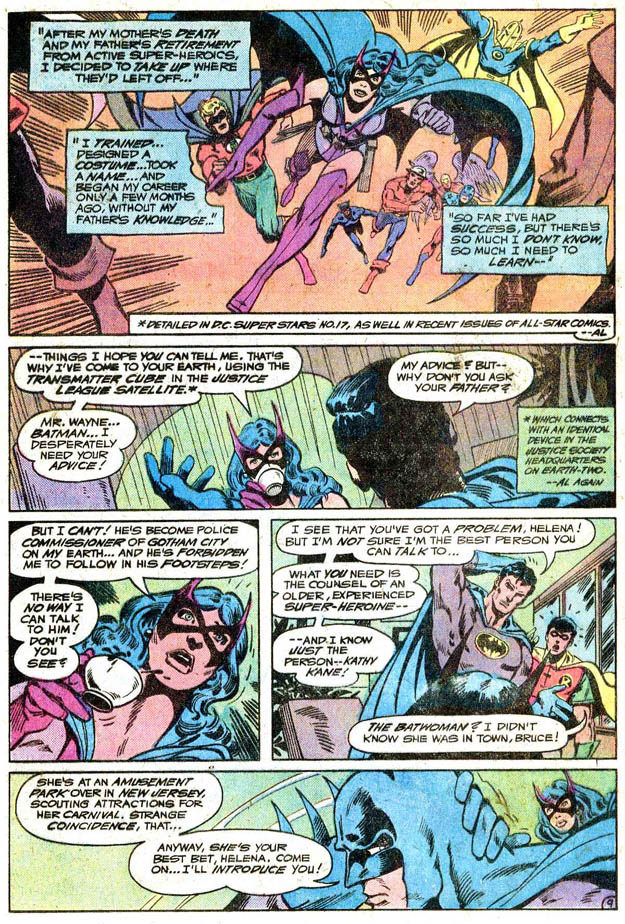 Aparo was a very talented artist, and this page showcases his diversity of skill.  The top third is a dramatic image of the Huntress with the rest of the Justice Society charging into action.  The rest of the page has Helena conversing with Bruce Wayne and Dick Grayson, a good demonstration of Aparo’s sequential storytelling, as well as his ability to depict the human, vulnerable sides of these colorful costumed figures.