When I was in high school, I was a big fan of artist Joe Jusko.  He would create these superb painted covers for such titles as Punisher and Savage Sword of Conan.  And then in 1992 the Marvel Masterpieces trading card set came out, composed entirely of Jusko’s painted renditions of Marvel’s most popular heroes & villains.  That was really amazing.

At the time, though, I often wondered why Jusko never did any interior artwork, never drew any full-length stories.  Obviously back then I was a bit too young to realize that it is a very time-consuming process to paint an entire 22 page comic book.  But since then, I’ve always kept an eye out for those rare occasions when Jusko did illustrate an entire book.

It really came as a surprise to me, then, when I recently found out that Jusko had worked on just such a project, and it had completely slipped under my radar.  That book was Tomb Raider: The Greatest Treasure of All, which was published back in 2005 by Top Cow / Image Comics.  However, I was hardly the only one to miss out on it, though.  On his Facebook page, Jusko referred to it as “Probably the best work of my career overall and also the biggest disappointment since almost no one saw it.”  He went on to explain that he had worked on the book for several years, and had put a tremendous amount of effort & energy into it.  But once it came out, somehow it had disappeared almost without a trace, and many people were not even aware that it had actually been published.

Looking through Jusko’s scans of the original painted artwork that he’d posted on Facebook, I thought to myself, “This looks fantastic!”  I immediately decided that I’d try and find a copy of the book.  I was pleasantly surprised when I checked Ebay, because several different comic book dealers had copies of the issue for sale at cover price.  So, yeah, once you know to look for it, it is out there.

Tomb Raider: The Greatest Treasure of All is written by long-time Superman creator Dan Jurgens.  I’m a fan of his work, as well, so it was a nice surprise to see he had plotted & scripted this story.  Jurgens turns in an exciting, suspenseful, humorous tale that features Lara Croft and her associate Chase attempting to liberate a mysterious treasure from an ancient Mayan temple, all the while dodging trigger-happy guerillas.  And, yes, Jurgens does explain why there is a lion in the jungles of Central America! 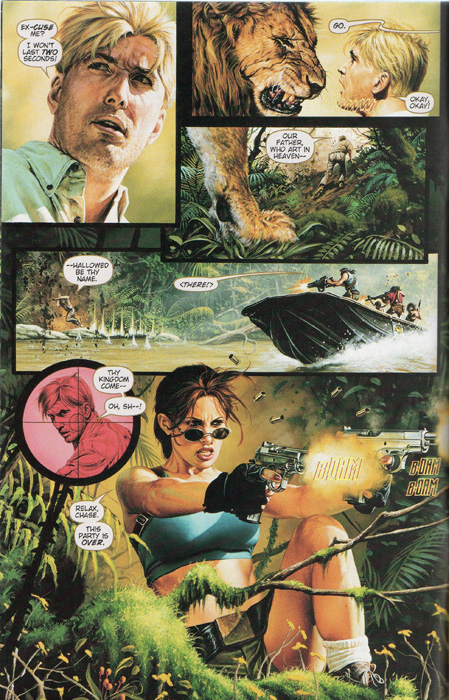 I don’t really play video games, so I don’t own a single one of the Tomb Raider games.  And I’ve never before picked up any of the various comic books featuring Lara Croft that Image Comics has published over the years.  Nevertheless, I really enjoyed The Greatest Treasure of All.  Jurgens did a nice job writing a fun, entertaining story.

As for the artwork, wow, Jusko definitely outdid himself!  This book really showcases his talents, not only as an amazing painter, but as a storyteller.  The thing about comic books, I now fully understand, is that it is not merely a matter of drawing pretty pictures.  It is also being able to illustrate the flow of action & events from one panel to the next.  There are many extremely talented artists out there who are simply not suited to draw comic books, simply because they do not have that crucial skill for sequential illustration.  With Tomb Raider: The Greatest Treasure of All, Jusko demonstrates that not only can he create amazing covers, pin-ups, and posters, but he can also illustrate a multi-page story in a very dramatic fashion.

What I especially liked about Jusko’s work on The Greatest Treasure of All was his depiction of Lara Croft.  He gives her a very lithe physique.  To be perfectly honest, from what I have seen of some other Tomb Raider comics published by Top Cow, many artists drew Lara as having this exaggerated porn star-type body, with huge breasts & a narrow waist.  Jusko, in contrast, renders Lara as an athletic figure.  She still looks drop-dead gorgeous, but in a realistic, believable manner.  A major part of this was undoubtedly due to the fact that Jusko uses models.  For Lara, he had Hollywood stunt woman Jasi Cotton Lanier pose for him. 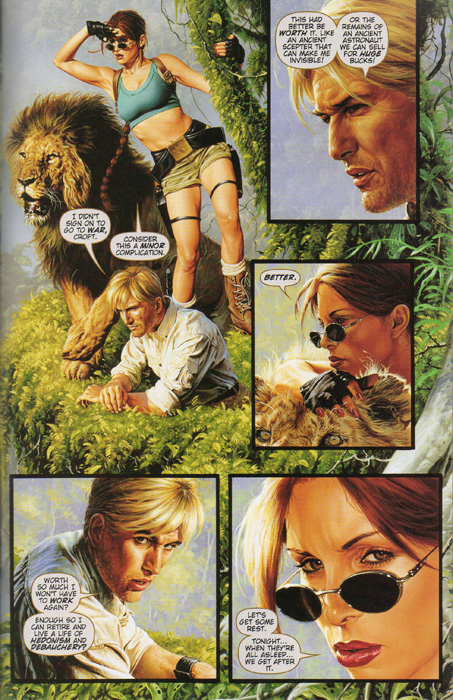 There are ten pages of “behind the scenes” items at the back of the book.  On display are some pages from Jurgens’ plot, Jusko’s initial pencils & sketches, photos he took of his models in various different poses, and painted pages in progress.  It is a nice look at the creative process.

It is definitely unfortunate that Tomb Raider: The Greatest Treasure of All went pretty much unnoticed when it was initially published.  It features some really amazing art by Joe Jusko.  If you are a fan of his work, I highly recommend tracking down a copy of the book.

I also recommend heading on over to Joe Jusko’s gallery at Comic Art Fans where he has posted high quality images of the art from The Greatest Treasure of All.  His paintings looks even more beautiful when scanned from the originals.