“There’s one thing, do you see, that’s terrifying in this world, and that is that every man has his reasons.” – Jean Renoir

When I was a kid in the early 1980s, one of my favorite television shows was Battlestar Galactica. Along with reruns of Star Trek and Doctor Who, Glen Larson’s saga of the last desperate survivors of humanity was a must see for my young self. Of course, re-watching the series a couple of decades later as an adult, I did come to realize that there was very little in the way of real character development over the course of the series. There was also some pretty dodgy plotting going on.

That seemed to be especially true of the show’s main human antagonist, Count Baltar. Although very memorably portrayed by the late, great John Colicos, from the standpoint of existing as a believable character, Baltar was quite lacking. He never seemed to really have any sufficient motivation for betraying humanity to the Cylons, other than the fact that he was evil with a capital “E.” Along those lines, he also appeared totally naïve in believing that the Cylons would hold up their end of their deal, spare his life, and install him as the ruler of his own world.

(This, of course, is one of the reasons why I really enjoyed Ronald D. Moore’s reimagining of Battlestar Galactica. As written, Dr. Gaius Baltar was an amazing character, a flawed, morally ambivalent individual who really grew over the course of the series. And he was so brilliantly played by James Callis.)

Keeping this in mind, I was very much intrigued when I learned that the Battlestar Galactica Annual 2014, published by Dynamite Entertainment, would be an in-depth examination of the origins of Count Baltar. It also piqued my interest that the story was written by Robert Napton who also penned several enjoyable Battlestar Galactica miniseries published in the mid-1990s by Maximum Press (say what you will about Rob Liefeld, but he was probably the first person to generate new interest in the property in over a decade).

So, what makes Baltar tick? What leads a man to become the ultimate traitor, betraying the whole of humanity to a race of cold, ruthless machine beings? Not too surprisingly, he is a product of his environment & upbringing.

As revealed by Napton, we learn that Baltar was born on Cygnus, a harsh, lonely tylium mining asteroid. After his mother died, young Baltar was left to be raised by his father Sela, an angry, abusive, greedy alcoholic. Unfortunately, young Baltar inherited his father’s covetous nature and, dazzled by the wealth of the mine, attempted to make off with a piece of tylium. Quickly discovered, Baltar was brutally beaten by his father. The youth came to realize that Sela cared more for his tylium mine than his son.

Baltar’s destiny spiraled further into darkness when the Cylon Empire invaded Cygnus. Fearful of being dragged into a full-scale war, the human Colonies left the tylium miners to fend for themselves. Suffering under the brutal lash of Cylon occupation, Baltar’s existing contempt for and resentment against his father grew to encompass the whole of humanity, who he regarded as having turned its back on him. 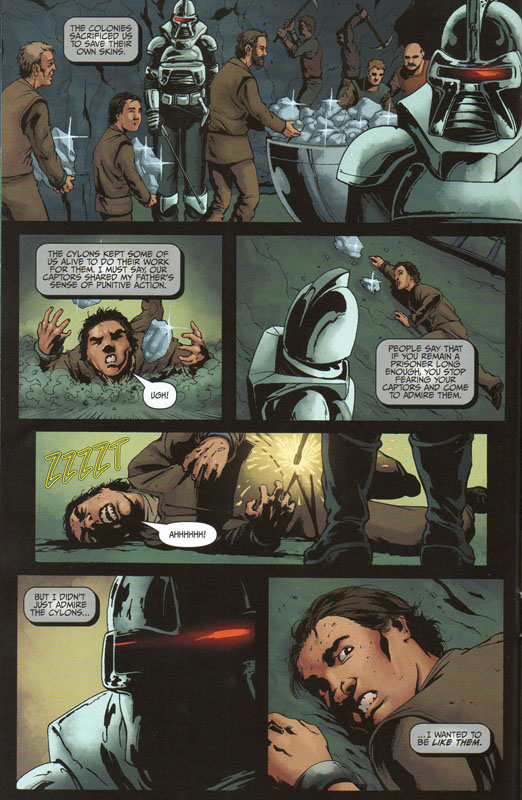 Thus Baltar set out on a lifelong course of collaboration and deception, of treachery and avarice, fueled by a burning desire for both self-preservation and power. Baltar can be regarded as a self-made man, climbing to great financial, social and political heights. And though these many accomplishments are built upon the bones of the innocents he used and discarded, from Baltar’s perspective his actions are perfectly justified and rational. As written by Napton, it makes perfect sense that this is an individual who ended up exactly as we see him at the beginning of the series’ debut episode.

And then Napton engages in a truly magnificent mind-frack (as the characters themselves might say). Inspired by the retconned ending of the series pilot, which famously undid Baltar’s apparent death earlier in the episode, Napton suggests a horrific revelation that leaves Baltar questioning both his sanity and his very existence. In the end, we might even be left feeling sorry for Baltar. And even if we cannot pity him, then at least we can understand him, and appreciate the tragedy of his existence, the squandered potential of his life.

The art on Battlestar Galactica Annual 2014 is by Kewber Baal. I am completely unfamiliar with him, but he does superb work on this story. Baal absolutely brings Baltar to life, not just rendering an amazing likeness of John Colicos, but imbuing the character with all the arrogance, contempt, desperation, and fear that the actor had brought to the screen in his performance.

Via some very effective layouts & storytelling, Baal also renders the Cylons as genuinely menacing, frightening figures. These mechanical tyrants truly seem like they are capable of conquering the entire galaxy, grinding all resistance beneath their heel. As opposed to, y’know, a bunch of tin soldiers who get blown to bits by a group of kids riding around on freaking unicorns… talk about an appalling example of Villain Decay! But I digress.

In any case, this was quite a good read. I hope that Napton has the opportunity to write further Battlestar Galactica stories at Dynamite. Based on the Annual, as well as his past work, he has a really good grasp of the characters, as well as some interesting thoughts on what sort of directions they can be taken in the future.