This year my Thanksgiving weekend was crazier than usual.  Last Monday, I received a phone call from a temp agency that I registered with some time ago.  I’ve been trying to get work thru them for a while now, because it seems that they have a lot of good positions with really big companies, openings that pay well and might eventually lead to something permanent down the road.  It turned out that this temp agency wanted to send me out on an assignment, all right, but not for an office job.  No, it was a retail job at a big department store in the Herald Square area of Manhattan.  I would go in for a half day of training on Wednesday, and then return for an eight hour shift on Friday.  Yep, that’s right: Black Friday.

I’ve worked retail during the holiday season before, about a dozen years ago.  It wasn’t pretty.  Crowds of people packed in tight, scrambling to grab all the big “deals.”  I do not even like the idea of shopping on Black Friday.  So the thought of actually working on it filled me with genuine fear.  Nevertheless, I accepted the assignment because, as I said, I’ve wanted to get work from this agency for a while now, and I thought this would be a good way to get a foot in the door.

Everything went fine on Wednesday.  I showed up, did the four hours of training, and left.  Thursday I was nervous, but I tried my best to stay calm.  I went to bed early, so I’d have plenty of sleep.  Friday rolled around, and I got up around 6:15.  Made it to the store in plenty of time of the beginning of the 9 AM shift.  I get assigned to the third floor, and one of the supervisors tells me to walk around & straighten things up, because customers were leaving things in a mess.  I do this for about 45 minutes when the store manager calls me over and takes me to the back office.  I find out that there’s been a mistake made.  Of the 16 people who showed up on Wednesday for training, only 12 were supposed to actually return on Friday to work.  I was one of the four who wasn’t picked to work Friday, but somehow there’s been a miscommunication and everyone came back.  I’m told they don’t need me, and I should call the temp agency to find out what happened.

Hmmph!  After all that worry, I’m in & out the door in under an hour!  So I call up the temp agency, and they have a totally lame excuse.  According to them, everyone who the store wanted to return on Friday received a confirmation e-mail telling them to come back, and if you did not get an e-mail, you should have known not to return on Friday.  They acted like this was so blindingly obvious, and seemed to take the attitude that I made some sort of moronic mistake.  Uh huh.  If it was so obvious, why did everyone come back on Friday?  If all four people who didn’t get an e-mail were clueless that they were not supposed to be there, then it’s not so obvious, is it?  Really, it seems very apparent that the agency should have notified everyone as to whether or not they were supposed to report to work.

Anyway, since I was already in Manhattan, I decided to walk over to Midtown Comics, which was having a 25% off everything until 12 noon sale.  I purchased a handful of trade paperbacks that I’d been meaning to get for a while now, but that I’d been putting off buying for an occasion such as this.  So it wasn’t a total waste of a morning. 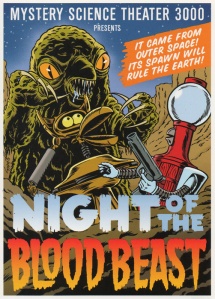 Back-tracking to Thursday, Thanksgiving itself was fun.  When I was a teenager in the 1990s, I used to watch the Mystery Science Theater 3000 Turkey Day marathon each Thanksgiving morning.  I miss those.  They used to be one of the highlights of the whole day for me.  I decided to recapture some of the spirit of those days by playing a couple of MST3K episodes on the DVD.  First up was the Turkey Day edition of Night of the Blood Beast, a 1958 cheese-fest produced by schlock filmmaker Roger Corman.  The monster in this movie looks like a giant flame-broiled parakeet.  Next I watched the MST3K edition of Gamera, which was the first of the giant flying turtle movies to come out of Japan.  Strangely, while it was on, I could have sworn our pet turtle Meeshee was watching the TV from her tank.

For dinner, Michele and I met up with her parents, and we ate out.  The restaurant put together a pretty good Thanksgiving Day spread, with turkey, gravy, stuffing, potatoes, and vegetables.  I wish we could have stayed out longer, but I thought I was going to be working the next morning.  We all know how that turned out.

After the Black Friday mix-up the next day, I returned to Queens.  Michele had been invited to a party by her friend Pam, so that night we headed to Brooklyn.  It was a cool get-together.  We were there most of the night.  It’s a good thing I quit drinking a few years ago, because there was a ton of booze at the party.  If I had been imbibing, I’m sure I would have gotten totally smashed.  As it was, I ended up spending most of the night watching a Jackass marathon on television.  I’ve never actually sat down and watched Jackass before.  Damn, what an incredibly stupid show… yet at the same time, absolutely hysterical in a really sick, twisted way.  I was totally laughing my ass off.  I really had to wonder at what sort of astronomical premiums Steve-O, Johnny Knoxville, and the rest of the gang need to pay on their insurance policies.  That is, assuming any carrier would be willing to cover them.

Around three in the morning a bunch of us headed out to a local bar, the Cobra Club.  With a name like that, you would think it would be a douchebag type of place, but turned out to be really cool.  While we were there, I ran into this guy Alex who I knew from way back when I was living in London, England for six months.  I’d bumped into him in NYC a couple of times since, but it had been years since I’d last seen him.  That was cool.  Back around 2004 he was in this local industrial metal band Still Life Decay whose work I liked.

Shortly before last call, the DJ played “Imagination” by Xymox.  I had not heard that song in years and years.  It was so long, in fact, that I’d forgotten who recorded it.  I ended up downloading it off of Amazon the next day.  It’s always cool to re-discover old music like that.

The rest of the weekend was pretty low key.  I was mostly relaxing and reading comic books.  Sunday night I popped another MST3K episode into the DVD player.  Warrior of the Lost World is one of my all time favorite episodes of that series.  I’ve mentioned it before on this blog.  Suffice to say, I was laughing non-stop as Joel, Tom Servo, and Crow went to town on it.  It was a fun way to end the holiday weekend.