This is one blog post that I really wish I did not have to write.  I just found out that longtime comic book artist Dick Ayers passed away on May 4th at the age of 90.

Ayers was born on April 28, 1924 in Ossining, NY.  He spent the first twelve years of his childhood in White Plains.  At age 13, his family moved to a farming community in Upstate New York.  He returned to Westchester in his late teens, just in time to graduate from high school.  Years later, Ayers would say that his teenage years spent living in that rural area, with its lack of electricity & plumbing and multitude of horses, was the perfect training to become an artist who specialized in drawing Westerns.

Serving in World War II, Ayers was stationed in England & France.  Shortly after returning home, he attempted to pitch a comic book series he had devised, Chic ‘N’ Chu.  Although unsuccessful, in the process Ayers met Tarzan newspaper strip artist Burne Hogarth and studied under him.  In the late 1940s, Ayers began drawing comic books for Vin Sullivan’s Magazine Enterprises, and in 1950 created the Western masked vigilante known as the Ghost Rider for them.  Around this time he also began dating Lindy Walter.  They soon fell in love, and married in 1951.

In the 1950s, Ayers began working for writer / editor Stan Lee at Atlas Comics, the 1950s incarnation of Marvel.  He illustrated a significant number of Western, war, and horror stories, as well as drawing several stories for the short-lived revival of the original Human Torch and Toro in 1954.  One of his Human Torch stories was left unseen for 14 years, until editor Roy Thomas had “The Un-Human!” published in the pages of Marvel Super-Heroes #16 (September 1968).  I’ve always enjoyed the crazy splash page for that tale, with its titanic eight-headed, six-limbed monster parachuting down from the sky!

In the late 1950s Ayers first began inking Jack Kirby, an association that continued into the 1960s, as Atlas officially became Marvel Comics.  I have always felt that Ayers was a really good match to ink Kirby on Western, war, and monster stories.  Among those was Strange Tales #89 (cover dated October 1961) which featured the debut of the now-iconic Chinese dragon Fin Fang Foom.  Ayers was also a good choice to ink Kirby on the early Fantastic Four issues, which still had one foot firmly in the territory of the recent Atlas monster & sci-fi tales.

Ayers had this sort of “earthy” quality that really suited the war and Western genres both as a penciler, and as an inker to Kirby.  In contrast, you had the slick, polished embellishments of Joe Sinnott, which were a much better fit for the high-tech science fiction adventures that Kirby was penciling in his later Fantastic Four stories.  That just goes to show the importance not just of finding the right pairing of penciler & inker, but also making sure that their finished work fits the atmosphere of the stories they are illustrating.

One of the best fits at Marvel for Ayers, first as an inker and then a penciler, was the retro World War II series Sgt. Fury and his Howling Commandos, which began publication in 1963.  After inking Kirby on the first few issues (plus the Captain America team-up in #13) Ayers took over as the regular penciler with #8, staying on the series for the next decade.  Ayers collaborated with writers Stan Lee, Roy Thomas and Gary Friedrich on Sgt. Fury.  He was paired with such embellishers as John Severin, John Tartaglione, and Frank Giacoia, the latter of whom Ayers stated was his favorite inker to work with.

Ayers was the un-credited co-plotter on a number of these stories.  In his Introduction to the Sgt. Fury Marvel Masterworks Volume 2, Ayers detailed the genesis of one of his favorites, issue #23, “The Man Who Failed,” which was based on a suggestion from his wife Lindy: “Have the Howlers assigned to rescue a nun who was trying to save children from behind Japanese lines.”  The adventures of Nick Fury during World War II were always more slapstick than Saving Private Ryan, and there is a great deal of tongue-in-cheek humor to the scripting of the series.  Ayers explained that he regarded the Howlers’ exploits as “Baron Munchausen” stories, the types of colorful exaggerations that he and his fellow soldiers might indulge in after returning from the battlefield.

That said, Sgt. Fury could occasionally be gritty or poignant.  “The Man Who Failed” had Stan Lee showing British Howler Percy Pinkerton making peace with his youthful indiscretions & mend fences with his older brother.  “Killed In Action” in issue #18 ended with the tragic death of Pamela Hawley, Nick Fury’s first true love.  And issue #s 28-29 had Stan Lee & Roy Thomas scripting an apocalyptic confrontation between Fury and his arch-foe Baron Strucker.  Ayers did superb work penciling all of these dramatic stories. 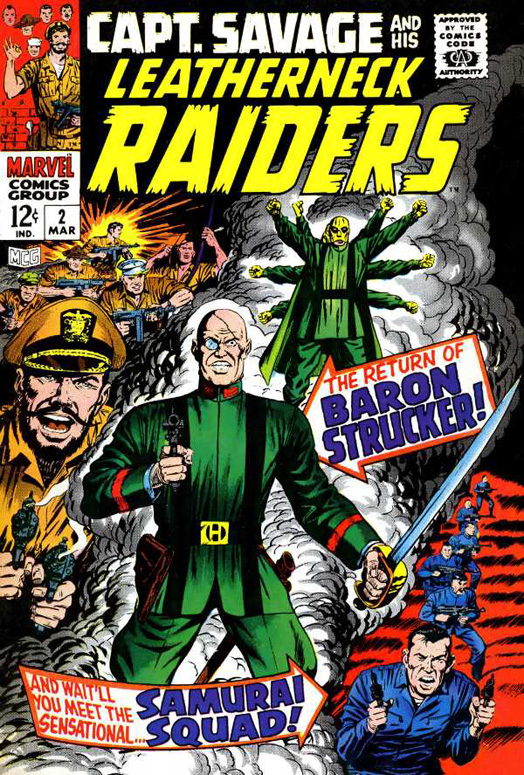 With writer Gary Friedrich, Ayers also worked on the Sgt. Fury spin-off title Capt. Savage and his Leatherneck Raiders.  That short-lived series’ most memorable story arc is probably the one that ran in issue #s 2-4, wherein Friedrich & Ayers revealed the super-secret origin of Baron Strucker and the terrorist organization Hydra.

In the early 1970s, Ayers was receiving less work from Marvel.  They also began reprinting his earlier stories without paying him.  For a time Ayers had to work as a security guard to make ends meet.  Eventually Ayers had the opportunity to explain his situation to Neal Adams.  An early, forceful advocate of creators’ rights, Adams got in touch with DC Comics editor Joe Orlando on Ayers’ behalf.  Orlando assigned Ayers to a number of titles including Kamandi, Jonah Hex, Freedom Fighters, Scalphunter in Weird Western Tales, G.I. Combat, and The Unknown Soldier.  On that last title Ayers’ pencils were embellished by talented Filipino artist Gerry Talaoc.  As I’ve written before, I very much enjoyed their collaboration.

Ayers worked at DC through the mid-1980s.  He also did work for the Archie Comics / Red Circle line of books, drawing a revival of The Original Shield.  Starting in 1991, Ayers began working on Femforce, the fun superhero title published by Bill Black’s AC Comics.  Ayers demonstrated a real mastery of the female form in those comics, illustrating some playfully sexy good girl art.

AC has also brought back into print a variety of public domain Golden Age comic book stories.  Ayers’ classic Ghost Rider stories were among the material reprinted in AC’s Best of the West, with the character re-named the Haunted Horseman.  Ayers would occasionally contribute new artwork to the book, such as Best of the West #43, which had Ayers collaborating with artist Ed Coutts on a beautiful cover spotlighting the Haunted Horseman and the time-traveling Femforce gunslinger Buckaroo Betty.

In 2005 Mecca Comics Group published Ayers’ three volume graphic novel autobiography The Dick Ayers Story, which was in-depth look at both his personal life and long career as an artist.  This was a project that Ayers had spent several years working on, a labor of love on his part.

Dick and Lindy Ayers lived in White Plains for several decades, and so would often make appearances at NY-area comic book conventions.  The first time I met them was at a show held at the Westchester County Center in the mid-1990s.  I remember asking Dick what he thought about current comic book artists.  He told me that he felt many of the more recent artists in the biz were not good storytellers.  He explained that a good comic book artist is someone who, if you removed all of the dialogue and narration, a reader would still be able to tell what the story was about just by looking at the artwork, how the action moves from one panel to the next.  That was probably the first time I ever heard comic book artwork explained to me in that way, and it helped me to develop an appreciation for the importance of layouts & storytelling.

I would often see Dick and Lindy at comic shows.  They were always such friendly people.  When I still lived near White Plains, they invited me over to their house on a few occasions.  It was a really enjoyable to see Dick’s studio, and to take a look at his original artwork that he had framed.  Another time, on a pleasant spring afternoon, we were in their back yard having lemonade & cookies.  I also saw them when Dick gave a lecture at the White Plains Public Library.

The last time I saw Dick and Lindy was at a small NYC comic show around 2011.  I recall that Dick was walking with a cane, and looking a bit unwell.  It seemed like age was finally starting to catch up to him.  However, I was recently happy to learn that he was scheduled to be a guest at the New York Comic Fest which is going to be held on June 14th at the Westchester County Center.  I was really looking forward to seeing Dick and Lindy again.  Unfortunately, that is now not to be.

I’m sad that Dick Ayers is no longer with us.  However, I am happy he lived a good, long life.  He leaves behind both a large family and an impressive body of work.