As a lead-up to the direct-to-DVD animated feature Justice League: Gods and Monsters, DC Comics released a trio of prequels that delved into the origins of the alternate-reality versions of Batman, Superman, and Wonder Woman who make up the team.  Released as digital-first comics, print editions have subsequently come out over the past three weeks.  These were co-plotted by Gods and Monsters producer Bruce Timm, co-plotted & scripted by longtime comic book writer J.M. DeMatteis, and illustrated by several talented artists. 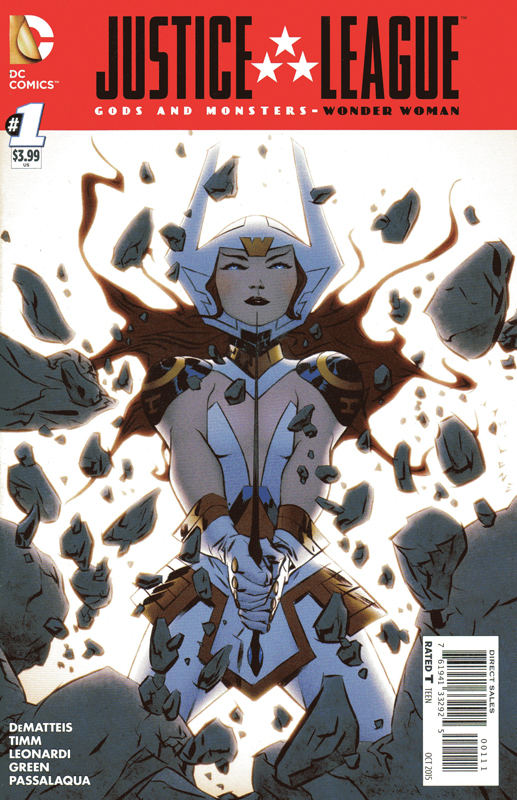 I haven’t yet had an opportunity to pick up the DVD but I enjoyed these three prequels so I expect that I’ll be getting it in the near future.  Here’s a quick look at them.

The Batman prequel reveals that in this reality the dark knight of Gotham is scientist Kurt Langstrom (who in the mainstream DCU is the shape-shifting Man-Bat).  Langstrom was suffering from cancer and attempted to devise a cure.  In a way he succeeded, although it resulted in him becoming a vampiric creature that needs to feed on blood to survive.  In an attempt to alleviate his conscience Langstrom becomes a vigilante, draining the blood of criminals.

For a couple of reasons I was a bit underwhelmed with the Batman book.  There were a lot of similarities between Langstrom and the Marvel character Morbius the Living Vampire.  In addition, the concept of a vampire Batman was already done very successfully in the Elseworlds trilogy Red Rain.  This feels a bit like a needless retread.

Nevertheless, despite the somewhat less-than-groundbreaking nature of this alternate Batman, DeMatteis does a good job examining Langstrom’s tortured psyche.  The artwork by Matthew Dow Smith is effectively moody, although some of his storytelling is a little unclear, his characters a bit stiff.  The cover by the super-talented Francesco Francavilla is very good. 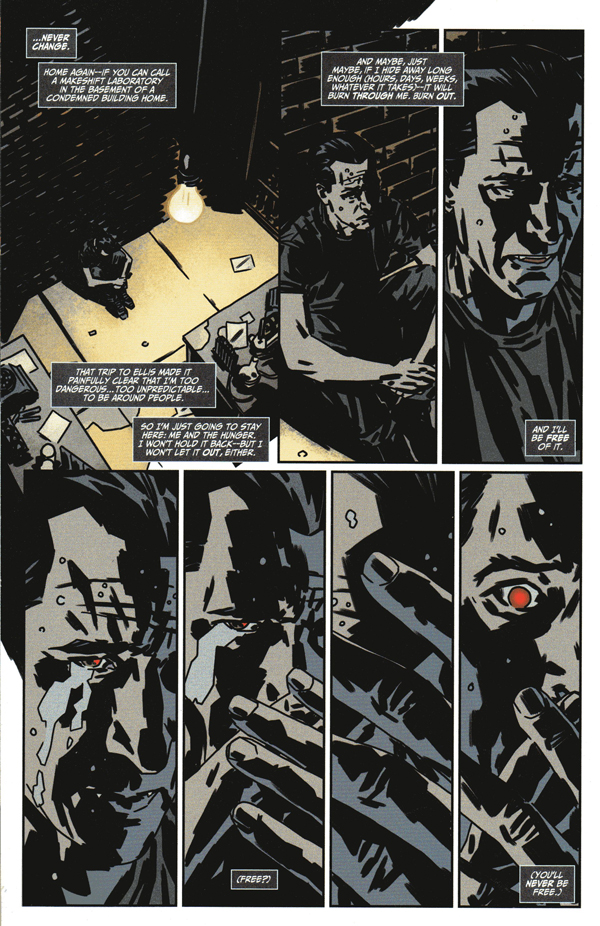 I was definitely much more impressed with the Superman prequel.  One of the qualities of Superman in his various incarnations is that although he was born on Krypton he was raised on Earth by the Kents, who instilled in him morality, responsibility and empathy.  Whatever the circumstances of his birth, he became a hero because his human parents raised him to be a good person.  Various alternate-reality versions of Superman have examined how, if the infant Superman had instead arrived somewhere else (such as the Soviet Union or Apokolips) he would end up a very different person.

The Superman in Gods and Monsters is not Kal-El, but rather the son of General Zod.  Nevertheless, he is still a product of his upbringing.  Found as a baby by a family of Mexican migrant workers, he is named Hernan Guerra.  Young Hernan is raised by a loving family that tries to teach him to be responsible with his powers.  Unfortunately he grows up seeing his family being exploited by farm owners who force their employees to work long, grueling hours for slave wages.  He is also regularly subjected to racism and xenophobia, harassed by people who accuse him of taking jobs from “real” Americans. DeMatteis has the story narrated by Hernan’s sister Valentina, who explains the conflict that the young outsider must endure…

“All he knew was that he had the powers of Heaven – and yet his entire existence was of the Earth: The son of migrant workers whose lives were defined by unending work. Constant fear and suspicion.”

Despite his parents’ best efforts, Hernan grows up full of resentment.  He wants to use his powers to make the world a better place, but his anger pushes him to extreme actions.  He is a Superman who is balanced precipitously on a moral tightrope, a well-intentioned hero who is in danger of becoming a tyrant.

The art & coloring by Moritat effectively depict both the innocence of young Hernan and the bitter disenchantment he continually experiences as he grows older.  Moritat superbly brings to live the complex characterization that DeMatteis & Timm have invested in their protagonist.  The cover by Gabriel Hardman demonstrates the majestic yet stern & brooding nature of this Superman.

The last of the prequels, Wonder Woman, features Becca, a New God who flees to Earth in a Boom Tube in 1962.  Living in exile among humanity, Becca is struck by the extreme dichotomy of humanity…

“And yet the very duality of this world calls to me… and I have no choice but to answer. So I travel from overcrowded cities to isolated mountains. From places of breathtaking natural beauty to war-ravaged wastelands. I observe the flow of life – with both wonder and horror —  never interfering in the events unfolding around me.”

Becca eventually finds herself in New York in 1967.  She is drawn to the hippie counter-cultural movement.  Joining a group of teenagers known as the “Hairies” at an upstate commune, Becca admires their willingness to attempt to expand their consciousness, to discover the larger universe, but despairs at them relying on harmful drugs to do so.  She attempts to help these young people achieve their enlightenment through more benign means, sharing with them the telepathic technology of her Mother Box.

It can be a difficult task to follow in the footsteps of Jack Kirby when revisiting his New Gods.  The characters and stories were such a personal expression on his part, and very much rooted in the social & political climate of early 1970s America.  Many a subsequent writer who has attempted to utilize the New Gods has either fallen into slavish imitation of Kirby, or has instead written material that feels very disconnected from the original stories.

DeMatteis has on occasion explored the New Gods.  He wrote a Forever People miniseries and several issues of Mister Miracle in the late 1980s.  Looking at those, as well as his work on this Wonder Woman special, I really feel that he is one of the more successful writers in revisiting Kirby’s concepts.  Yes, DeMatteis takes a very different approach to the execution of the characters, but thematically his utilization of them is akin to Kirby himself.

Much of Kirby’s work on the Fourth World books was rooted in his dissatisfaction at the American landscape of the late 1960s and the early 70s.  He was very troubled by the Vietnam War, by the Nixon presidency, and by the rise of the religious right.  Kirby saw in the hippies and flower children of the time a possible hope for tomorrow: a group of young people who rejected violence and discrimination and who wanted to create a better, inclusive society.

DeMatteis very much taps into this in “The Dream.”  Becca simultaneously regards the Hairies as both naïve and admirable.  She very much agrees with their goals, but recognizes that it takes not just ideals but hard work to make dreams a reality.  Nevertheless, she cannot help but think…

“Perhaps, I mused, naïveté is our best weapon against cynicism. Perhaps innocence is the only antidote to the soul-crushing disease of experience.”

Becca stays among the Hairies, hoping to assist them in working towards their goals.  For all their flaws and moral blind spots, she recognizes that their ideals are noble and worth striving to achieve.

The special is very effectively illustrated by longtime artists Rick Leonardi & Dan Green.  I have always found Leonardi’s style to be a bit sketchy & surreal, with a quality that can be either dreamlike or nightmarish.  That very much suits the tone of DeMatteis & Timm’s plot.  Green’s inking complements Leonardi’s pencils perfectly.  They have previously worked together on several occasions, always to excellent results.

The cover for the Wonder Woman prequel is by Jae Lee, with coloring from June Chung.  It is certainly a beautiful piece.  Much like Leonardi, Lee possesses a quality to his work that is simultaneously hyper-detailed and illusory.  His depiction of Becca is beautiful and striking.

Overall I was satisfied with the Gods and Monsters prequels.  Timm & DeMatteis did a good job developing the back-stories of the characters.  The scripting by DeMatteis is top-notch.  He has always been really good at getting into the heads of his characters.  The end result is that I am certainly interested in seeing them again in the animated movie.