I wanted to wish a very happy birthday to comic book artist Luke McDonnell, who was born on July 19, 1959.  McDonnell did a fair amount of work for both Marvel and DC in the 1980s and 90s.  He has this rather gritty, atmospheric style that I have always enjoyed.  I guess if I had to make a comparison, it is a bit like Gene Colan.  I have always appreciated McDonnell’s work for possessing a distinctive appearance that set it apart from many of his contemporaries.

Some of McDonnell’s most well-known work was as the penciler on Iron Man in the early 1980s, during a lengthy story arc written by Denny O’Neil.  It had previously been established by David Michelinie & Bob Layton in their excellent “Demon in a Bottle” storyline that Tony Stark was an alcoholic.  At the conclusion of it, with the help of Bethany Cabe & Edwin Jarvis, Stark had put down the drink.

Of course, the thing about addiction is that there is no cure.  Recovery is an ongoing process, and you need to actively work one day at a time to maintain your sobriety.  When O’Neil came on as the writer of the series, he had one of Stark’s business rivals, Obadiah Stane, manipulate events from behind the scenes so that Stark suffered a number of personal & professional setbacks.  The result was that Stark fell off the wagon in a major way, going into a serious downward spiral that eventually resulted in him losing his entire fortune to Stane.  For a while there, Stark hit rock bottom, roaming the streets of Manhattan, homeless & drunk, before beginning the long, difficult climb back to recovery.  In the meantime, Stark’s best friend James Rhodes had to take on the identity of Iron Man, joining the Avengers and opposing Stane’s schemes.

Luke McDonnell penciled the majority of this three year long arc.  His unflinchingly moody artwork was the perfect fit for this dark tale of Tony Stark’s fall & redemption.  One of those issues, #182, was recently voted the number seven position in The 25 Greatest Iron Man Stories Ever Told at Comic Book Resources.  Looking at the cover to that issue, you can see the stunningly dramatic power of McDonnell’s artwork.

I actually bought most of these Iron Man comics from out of the back issue bin.  The very first Iron Man issue that I ever read as a kid was #194 (May 1985), which featured dual tales of Stark and Rhodes.  By this point in time, Stark had regained his sobriety and constructed a makeshift set of armor.  Following a battle with a Godzilla-like creature, he plunges into the ocean, and we see him desperately trying to avoid drowning.  Meanwhile, Jim Rhodes, still in the regular Iron Man armor, while helping out Hank Pym with some experiments, is trapped in a bizarre alien dimension.  McDonnell did an excellent job at illustrating the parallel predicaments of the two Armored Avengers.

After departing from Iron Man, McDonnell became the regular artist on Justice League of America.  I think that his work on JLA was definitely underrated, probably because he was chronicling the adventures of the rather unfairly maligned “Justice League Detroit” team.  In any case, JLA was soon cancelled to make way for the new Giffen & DeMatteis “bwah-ha-ha” version.  Luckily, McDonnell quickly moved over to a brand new title that was seemingly made to order for him.

Debuting in 1987, Suicide Squad was penned by the super-talented John Ostrander.  Once again, McDonnell’s artwork was an absolutely perfect fit.  With its premise of convicted supervillains drafted by the government to perform covert black ops missions, featuring amoral characters and political intrigue, McDonnell’s moody style was just right in establishing a dark, noir, suspenseful atmosphere.  McDonnell also penciled & inked the 1988 Deadshot miniseries written by Ostrander & his wife Kim Yale which spotlighted the Squad’s resident sharpshooter with a death wish.

(The first eight issues of Suicide Squad, along with Secret Origins #14, were collected in the 2011 trade paperback Trial By Fire.  Definitely pick up a copy.) 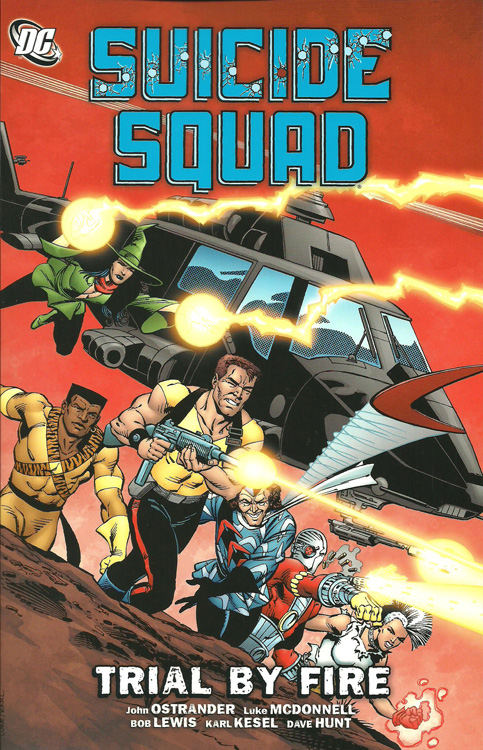 In the 1990s, McDonnell continued to do work for DC, penciling issues of Armageddon: Inferno, Eclipso and Green Lantern: Mosaic.  He also drew a trio of stories for Marvel’s alternate reality series What If…?   Unfortunately, as with a number of other good, solid artists, by this time I think McDonnell’s  particular style was sort of falling out of favor, with editors preferring either “flashy” work along the lines of Liefeld and McFarlane, or Manga-inspired work.  He seemed to be getting fewer and fewer gigs.  The last couple of stories I recall seeing him do were Atom Special #2 in 1995 and Batman: Legends of the Dark Knight #115 in 1999.  As always, McDonnell did his usual excellent work on both assignments.

I have been fortunate enough to meet McDonnell on a couple of occasions in the past.  I think the last time was about 14 years ago.  Back then, my primary original art focus was in obtaining sketches of Captain America.  I asked McDonnell for a sketch of Cap and, wow, did he do an absolutely amazing one.  I would love to get another sketch from him.  I’d probably ask him to do a drawing of Deadshot in my supervillains-themed sketchbook.

Nowadays, I believe that Luke McDonnell is doing coloring work for IDW’s Popeye comic books.  I’m glad to see he is still employed, but I definitely hope that one of these days he has an opportunity to return to the drawing board.

In any case, happy birthday, Luke!  Hope there’s many more to come.