I was very sorry to hear that author C.J. Henderson had passed away on July 4th at the age of 62.  I knew that he wasn’t well.  About a month ago I had run into a mutual acquaintance, writer James Chambers, for the first time in several years.  I asked Jim if he was still in touch with C.J. and had learned that he was suffering from cancer.  So while his passing is not unexpected, it is still sad.  C.J was a talented writer, as well as a nice, friendly fellow with a distinctive, wry sense of humor.  It was always a pleasure to see him.

While I wasn’t close friends with C.J. he was someone who I had encountered numerous times over the years, both socially and at comic book conventions, where he was often a guest.  I first met C.J. back in the mid-1990s, at one of the parties that artist Fred Harper threw at his loft in Brooklyn.  I know I’d read a handful of C.J. Henderson’s stories previously, and afterwards I acquired quite a bit of his work.  In 2003 I hitched a ride to the Pittsburgh Comic Con with C.J., Jim Chambers, and a few other people.  That was a lot of fun.  Fred and I also once spent New Year’s Eve with C.J. and his family, which was a nice, relaxing evening.

C.J.  Henderson was a very prolific author who was extremely fond of both hardboiled detective and horror fiction.  He wrote a number of excellent novels and short stories in those two genres, often deftly mixing the two.  One of Henderson’s ongoing characters was private eye Jack Hagee.  The various Jack Hagee short stories, written throughout the 1980s, were collected together in What You Pay For in 1990.

Henderson’s other signature P.I. was Teddy London.  Whereas Hagee’s cases were very much grounded in gritty noir, London’s investigations took him into the strange, dark world of the supernatural.  Henderson was a self-avowed fan of H.P. Lovecraft’s “cosmic horror,” and London’s debut novel The Things That Are Not There saw the detective encountering malevolent entities summoned up from another dimension.  Originally published in 1992, the book returned to print a decade later, which is when I finally had an opportunity to read it.  The Things That Are Not There was definitely a riveting book, and I highly recommend it.

C.J.’s fondness for Lovecraft extended through much of his work, including his more humorous writing.  Baby’s First Mythos was a tongue-in-cheek faux children’s book that offered an overview of Lovecraft’s writings from A to Z, i.e. “N is for Necronomicon, That horrid flesh-bound book of magic, The reading of which by mere mortals brings their damned souls, To ends both terrifying and tragic.”  C.J. collaborated on Baby’s First Mythos with his daughter Erica Henderson, who provided the excellent illustrations. 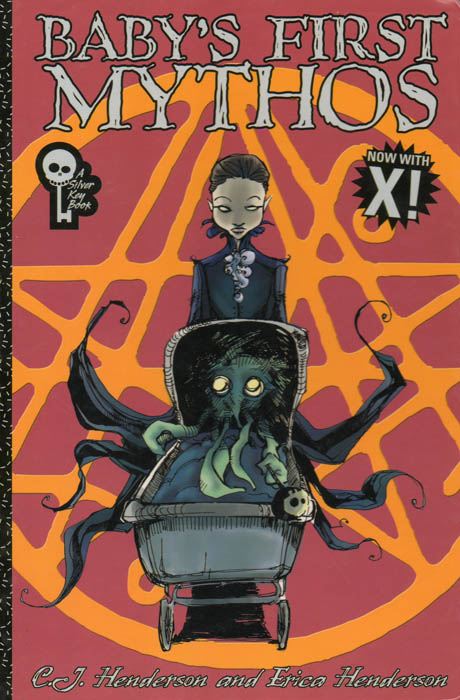 C.J.’s short fiction appeared in numerous anthologies over the years.  These included Horrors Beyond, Dark Furies, Return To Lovecraft Country and Weird Trails.  Henderson also contributed to X-Men: Legends.  Published in 2000 and starring the mutants of Marvel Comics, the book was a collection of original prose stories set throughout the team’s history.  Henderson penned “The Worst Prison of All,” which featured Professor Xavier encountering a Lovecraftian elder god on the psychic plane.

Henderson was also a non-fiction writer & reviewer.  The Encyclopedia of Science Fiction Movies, clocking in at a mammoth 500 pages, featured hundreds of reviews of sci-fi films.  Henderson’s write-ups were very interesting & insightful.  Even though I must have disagreed with half of his opinions, I found his analyses to nevertheless be thought-provoking and extremely well articulated.

C.J. did quite a bit of work in comic books over the years.  In the mid-1990s he wrote several issues of Neil Gaiman’s Lady Justice from Tekno Comix.  Henderson also was quite a prolific contributor to Moonstone Books.  He wrote and edited several Kolchak: The Night Stalker specials (he was a long-time  fan of the character).  Henderson adapted some of his own characters from prose to comic books at Moonstone, as well.  Paired with artist Richard Clark, he wrote a Jack Hagee: Private Eye graphic novel that was published in 2003.  Henderson also wrote two issues of Lai Wan: Tales of the Dreamwalker, featuring the lovely Asian “psychometrist” who assisted Teddy London in the pages of The Things That Are Not There.

In 2004 Moonstone published Slamm! The Hardboiled Fiction of C.J. Henderson, a trade paperback collection of mystery, suspense, and horror stories illustrated by Fred Harper, Richard Clark, Trevor Von Eeden and Ben Fogletto.  I really wish I could locate my copy of that book, because it’s really good.  Unfortunately it’s probably packed up in storage with the majority of my comics.

I once asked C.J. who his favorite artist had been to work with in comic books.  He stated that Trevor Von Eeden was probably the artist he had most enjoyed collaborating with.  In addition to their time at Moonstone, C.J. and Trevor had worked together on a pair of stories at DC Comics, the two part “Duty” in Batman: Legends of the Dark Knight #105-106, and Batman: Joker’s Apprentice, with inks by Josef Rubinstein.  Both stories featured Batman’s arch-nemesis the Joker.  “Duty” focused on James Gordon having to thwart the Clown Prince of Crime without the assistance of the Dark Knight.  The Joker’s Apprentice special had Henderson placing the Joker in a Hannibal Lector-esque role, manipulating from within the walls of Arkham Asylum a serial killer protégé who he aims at Batman as a twisted “present.”  It was an extremely dark, macabre, gruesome tale much in the vein of Criminal Minds, although Henderson’s story preceded that television series by several years.

C.J. Henderson was undoubtedly an extremely talented writer who crafted some amazing, entertaining, engaging stories during his lifetime.  He will definitely be missed.