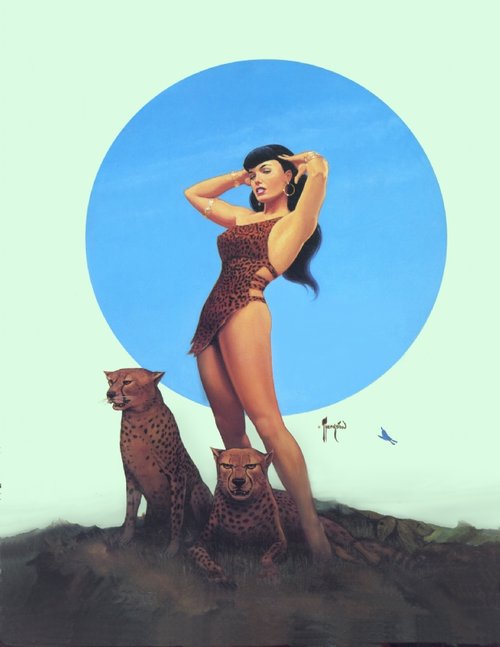 I was saddened to learn that comic book artist, publisher & historian Greg Theakston had passed away on April 22nd.  He was 65 years old.

As a teenager Theakston was involved in the Detroit area comic book fandom in the late 1960s and early 70s.  During this time period he was one of the organizers of the Detroit Triple Fan Fair comic book & sci-fi conventions.

Theakston, along with such fellow Detroit area fans as Jim Starlin, Rich Buckler, Terry Austin, and Keith Pollard, made the jump from fan to professional during the 1970s.  From 1972 to 1979 Theakston worked at Neal Adams’ Continuity Studios, where he gained invaluable experience, learning the tools of the trade alongside his contemporaries.  Theakston was one of the so-called “Crusty Bunkers,” a loose-knit group of Continuity-based artists organized by Adams.  Throughout the 1970s the Crusty Bunkers would pitch in to help one another meet tight comic book deadlines.  Theakston was interviewed about his time at Continuity by Bryan Stroud, revealing it to be a crazy, colorful experience.

Theakston worked for a number of publishers over the years, creating illustrations for National Lampoon, Playboy, Rolling Stone and TV Guide.  His art appeared in a number of issues of MAD Magazine in the late 1980s and throughout the 90s.

Most of Theakston’s comic book work was for DC Comics.  In the 1980s Theakston was often assigned the high-profile job of inking the legendary Jack Kirby’s pencils.

Theakston’s inking of Kirby proved to be divisive.  Personally speaking, as a huge fan of Kirby, I like what Theakston brought to the table.  I do recognize that Theakston was not the ideal fit for Kirby’s pencils in the way that Joe Sinnott and Mike Royer were, but I nevertheless felt he did a good job inking him. 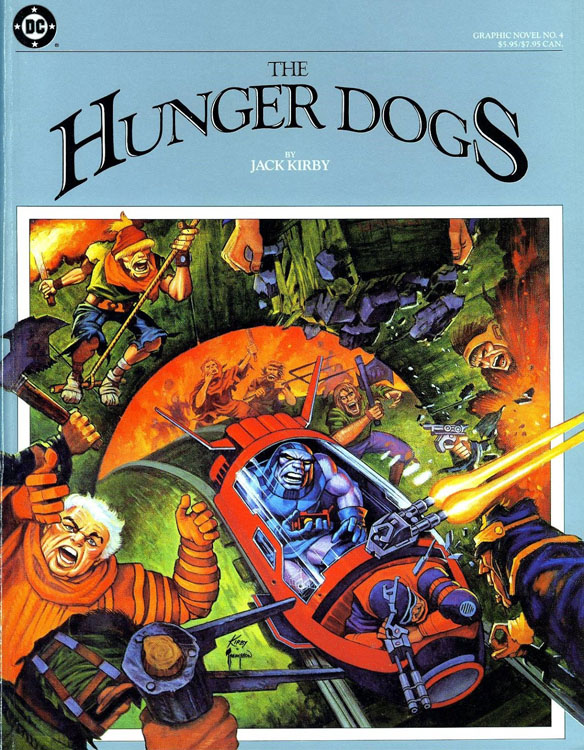 One of the things to recognize about that collaboration is that during this time Kirby’s health unfortunately began to decline.  As a result his penciling started becoming loser.  Theakston was often called upon to do a fair amount of work to tighten up the finished art.  This led to some creative choices on his part that were not appreciated by some.  I think Theakston was in a less-than-ideal situation, having to make those choices over the work of a creator who was already regarded by fans as a legend and a genius.  The result was a scrutiny of his inking / finishing more much more intense than if he had been working with almost any other penciler.

Comic book creator Erik Larsen observed on the website What If Kirby that Theakston possessed a definite fondness for the earlier work Kirby did with Joe Simon in the Golden Age.  This translated into Theakston inking Kirby with a heavier, darker line that evoked the Simon & Kirby stories of the 1940s and 50s, rather than the much more slick, polished embellishment that Sinnott and Royer brought to it in the 1960s and 70s.

Theakston inked Kirby on the first two Super Powers miniseries, the Hunger Dogs graphic novel that concluded the saga of Orion and the New Gods, various entries for Who’s Who: The Definitive Directory of the DC Universe, and the team-up of Superman and the Challengers of the Unknown in DC Comics Presents #84 written by Bob Rozakis.

I enjoyed Theakston’s work on these various titles.  In my mind, the stunning cover painting for The Hunger Dogs featuring Darkseid that he did over Kirby’s pencils is one of the best pieces Theakston ever produced.

(Theakston’s inking on the Alex Toth pages in DC Comics Presents #84 was unfortunately much less impressive.  In his defense I will say that when someone other than Toth himself inked his pencils, the majority of the time the results were underwhelming.)

Theakston also inked fellow Detroit native Arvell Jones’ pencils on Secret Origins #19 (Oct 1987).  Roy Thomas’ story recounted, and expended upon, the origins of the Guardian and the Newsboy Legion, characters who had been created by Simon & Kirby in 1942. Given his fondness for the work of Simon & Kirby in the 1940s, it was entirely appropriate for Theakston to work on this story. His inking for it certainly evoked the feel of Golden Age comic book artwork. 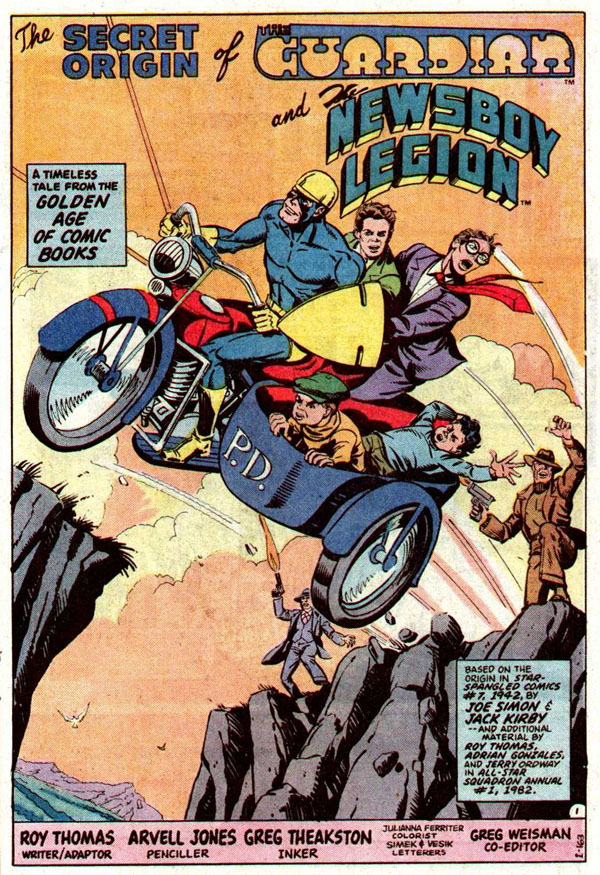 Theakston only worked for Marvel Comics on a couple of occasions.  Early in his career he painted the cover for Planet of the Apes #9 (June 1975) in Marvel’s black & white magazine line.  Almost a quarter century later Theakston painted a Kirby-inspired piece for the cover of the second Golden Age of Marvel Comics trade paperback (1999). 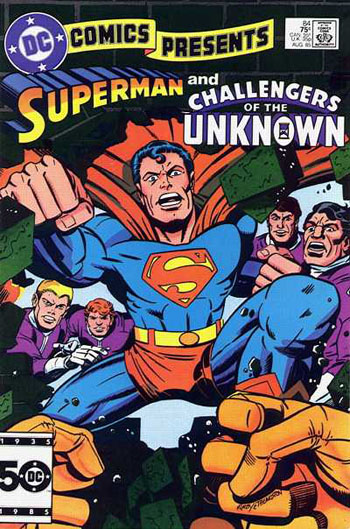 Theakston developed a process for reprinting comic books that DC editor Dick Giordano later referred to as “Theakstonizing.”  As per What If Kirby, Theakstonizing “bleaches color from old comics pages, used in the restoration for reprinting.” Theakstonizing was used to publish a number of collections of Golden Age comic books in the 1980s and 90s, among these the early volumes of the DC Archives hardcovers.  Unfortunately the Theakstonizing process resulted in the destruction of the original comic book itself.  It’s a shame that so many old comics had to be destroyed to create the early DC Archives and other Golden Age reprints, but in those days before computer scanning that was the best way available to reproduce such old material. Additionally, as explained by Theakston’s ex-wife Nancy Danahy:

“Greg did everything to avoid destroying a valuable comic book for his Theakstonizing process. He would search for the ones with tattered, missing covers, or bent pages that devalued the book. It was only in a few instances that he used one in good condition, and only then if he knew the return on investment was worth it. He felt it would be better for the greater good to be able to share the work with more people than to let one book settle in a plastic bag on someone’s shelf.”

Beginning in 1987, Theakston also published the fan magazine The Betty Pages, dedicated to sexy pin-up model Bettie Page, of whom he was a huge fan.  Theakston is considered to be one of the people who helped bring Page back into the public consciousness, resulting in her once again becoming an iconic figure of American pop culture.  In the early 1990s Theakston conducted an extensive phone interview with Page that was published in The Betty Pages Annual Vol 2 in 1993.

Theakston created several stunning, sexy paintings featuring Bettie Page.  One of my favorites is a striking piece featuring Page in short leopard-skin dress, silhouetted against a giant blue moon in the sky behind her, with two leopards crouching at her feet.  It saw print as the cover for The Betty Pages Annual Vol 2.

I can’t say I knew Greg Theakston very well. We met once in 2012, at the Comic Book Marketplace show in Manhattan, and we also corresponded by e-mail.  When I met him he certainly appeared flattered that I had gotten a tattoo of the Who’s Who pin-up of Beautiful Dreamer from the Forever People, which he had inked over Kirby’s pencils. He also appeared to appreciate my compliments concerning his work inking Kirby. Greg did a cute drawing of Bettie Page for me at that show in one of my convention sketchbooks.  He subsequently surprised me with a gift of his original inks for the Beautiful Dreamer piece, which I felt was a generous gesture.

I thought Greg was a talented artist who created some very beautiful paintings and illustrations.  All of my interactions with him were pleasant. I understand that over the years several others had much less amicable relations with him. Reportedly he was one of those people who could run very hot & cold, and that he was dealing with some personal issues.

Whatever the case, I do feel it’s unfortunate that Greg passed away. I know 65 is not young, but it’s not super-old either.  Judging by the reactions I have seen over the past week, he will certainly be missed by quite a few people, myself included.