“Power does not corrupt. Fear corrupts… perhaps the fear of a loss of power.” – John Steinbeck

At long last here is the third and final part of my examination of the conflict between Magneto and the Red Skull, between the Holocaust survivor turned mutant revolutionary and the Nazi terrorist.  For those who have not already read them, here are links to Part One and Part Two.

Previously the Red Skull, who’d had the brain of the deceased telepath Charles Xavier grafted into his own, was brutally killed by Magneto.  Unfortunately, rather than ending the Skull’s threat, this caused him to transform into a new incarnation of Onslaught, the being originally created years before from the combined subconscious darkness of Xavier and Magneto’s minds.

(Or perhaps Onslaught was actually Rob Liefeld… I forget exactly.)

The Avengers and X-Men’s battle against the “Red Onslaught” and the terrible aftermath is seen in the Axis miniseries by writer Rick Remender and various artists.  Magneto’s perspective of these events is depicted in issue #s 11 and 12 of his solo series, written by Cullen Bunn and illustrated by Gabriel Hernandez Walta and Roland Boschi, with covers by David Yardin.

In Axis #1, illustrated by Adam Kubert, the reborn Red Skull / Onslaught is spreading a psychic hate plague across the globe.  Havok, Rogue, the Scarlet Witch and Magneto attempt to stop the Skull.  It seems a hopeless task, especially as the three members of the Avengers Unity Squad want nothing to do with Magneto.  Havok, perhaps under the Skull’s psychic influence, attacks the master of magnetism, shouting at him “You damn murdering hypocrite! You’re just like him, Magneto!” 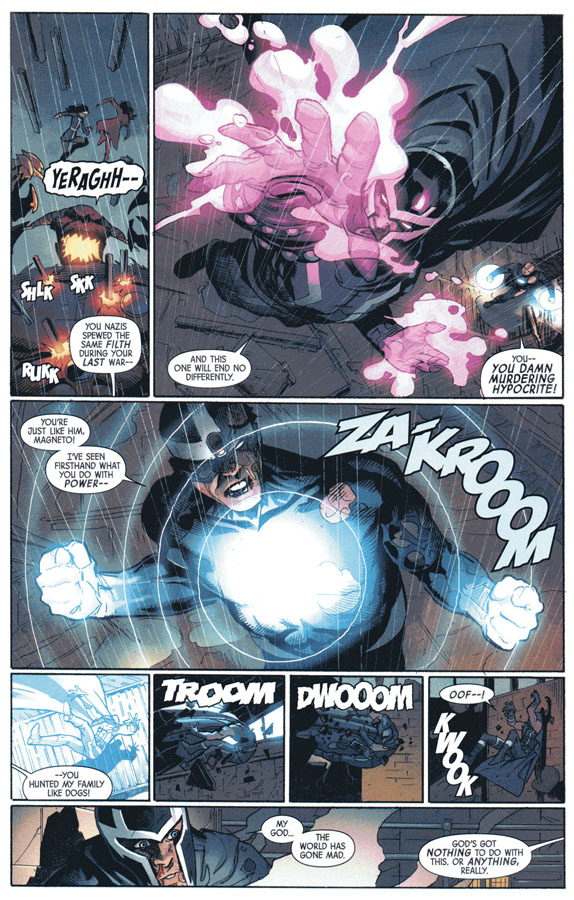 The Avengers and X-Men, alerted to the Red Skull’s threat, arrive in Genosha.  After long months of tense relations between the two teams, they finally realize that they need to join forces against this common foe.  The towering Red Onslaught, however, is unimpressed, and he summons a pair of immense Sentinels constructed out of near-unbreakable adamantium.  The Skull reveals that he previously used his mental powers to manipulate Tony Stark into constructing these robot monstrosities, programming them with the data needed to defeat Earth’s heroes.

(Side note number one: Was any of this previously seen or even hinted at before the events of Axis #1, maybe in an issue of Iron Man?  Because the reveal by Remender seems to come completely out of left field, with no build-up or foreshadowing.)

Between the Red Skull and the Sentinels, the heroes have little chance, the blame for which Magneto is more than happy to lay at Iron Man’s feet.  In the midst of battle, Magneto flees.  The Avengers and X-Men are defeated and imprisoned by the Sentinels.

Back in his sanctuary, away from everyone else, Magneto finally engages in self-reflection, and acknowledges his own role in causing this crisis.  “All that I have done… it was for nothing. I have committed unspeakable acts. I have hurt people. I have taken lives as easily as I might draw breath. All so my people, so mutants, might thrive.” 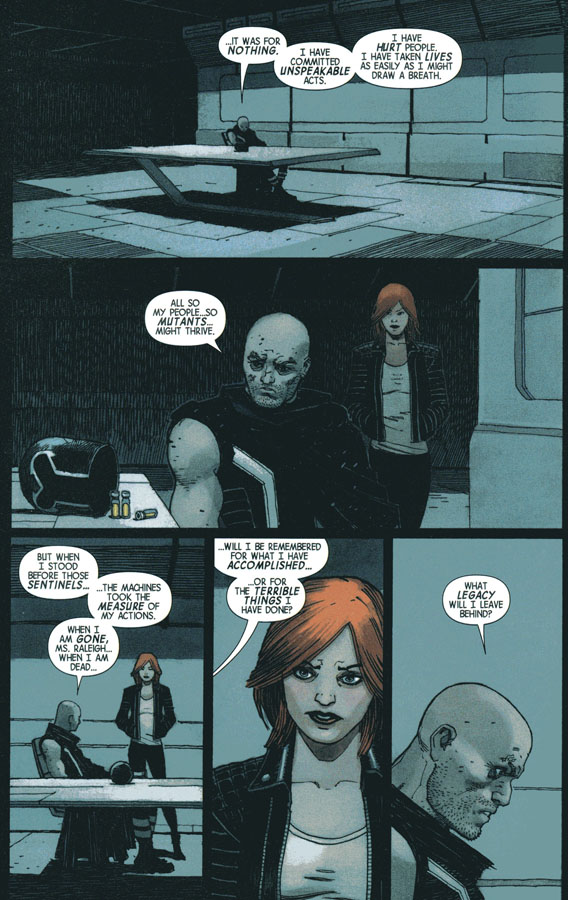 Briar Raleigh, Magneto’s human ally who sympathizes with his goals, argues that he could not have foreseen the results of killing the Skull.  Magneto disagrees, informing her “After all this time, after so many atrocities committed in the name of mutants, after so many bitter failures, I was blind not to anticipate something like this.”

Attempting to spur Magneto out of his despondency, Briar plays old video footage of his brutal attacks against anti-mutant forces.  She then shows him an interview with a young girl he once saved, who says “People say he’s some sort of monster, or maybe a terrorist, or that he’s insane. But I’m just glad mutants have someone like him, someone who can be angry, who can do bad things, so that we might survive.”

Grimly resolved that he is the one who has been forced into the role of making the difficult but necessary choices, Magneto sets out to recruit allies against the Skull.  If the Skull’s Sentinels are programmed to defeat heroes, then he will ally himself with criminals and villains.  Among those he approaches are Doctor Doom, Loki, Carnage, Sabretooth and Mystique.

Deadpool, who is not, strictly speaking, a villain, but who is certainly nuts, gets wind of all this and decides to find out what is going on.  The merc with a mouth tells him “I kinda want to know what the hell you’re trying to pull. I mean, I thought you were supposed to be a good guy.”  Magneto somberly responds “Not even you are foolish enough to think me a hero. Such distinctions are for those who can look at their own reflections and not despair.”

Magneto and his group of ne’er-do-wells engage the Red Skull and his Sentinels in Genosha.  During the battle, they manage to free the Scarlet Witch and Doctor Strange, and Magneto tells them to attempt an “inversion spell” to revive the suppressed remnants of Xavier’s consciousness in the Skull’s mind.  Before it can be completed, Strange is knocked out.  Doctor Doom steps in and forces Wanda to complete the spell with him.

The inversion is seemingly successful.  Onslaught is banished, and the Red Skull is returned to human form, unconscious.  Immediately, though, there are problems.  The Avengers want to imprison the Skull ASAP before he re-awakens.  The X-Men, however, want custody of him, to see if now they can fully restore Xavier to life.  The disagreement causes the two teams to once again find themselves at odds with one another, neither side willing to budge.  Their fragile alliance is shattered.  Even in defeat, the Skull achieves a dark victory, once again driving apart humans and mutants.

And what has happened to Magneto?  Wounded, watching all of this from afar, he hears the Scarlet Witch ask “Where are the villains?”  Magneto bitterly thinks to himself, “After everything we did… everything I did… these Avengers… even my own daughter… would still see me as another threat to be eliminated or contained.”

As we soon find out in Axis #4, however, the inversion spell by Wanda and Doom worked much too well.  It caused everyone who was in Genosha to turn 180 degrees on the moral compass.  All of the heroes who were present are now ruthless, violent and selfish.  All of the villains are now moral and altruistic.  Sam Wilson, formerly the Falcon and now the new Captain America, wants to lead all of the inverted Avengers in taking over the world, creating an ordered society that they control.  The mutant Genesis is transformed into a reborn Apocalypse who leads the X-Men into war against humanity.  They construct a bomb that will wipe out all non-mutants on Earth.  Oh, yeah, and Tony Stark becomes an arrogant, greedy, hedonistic asshole.  If you thought regular Iron Man could be a jerk, well, inverted Stark is about a hundred times worse.

The now-elderly Steve Rogers and the few non-inverted heroes who managed to escape being captured by the corrupted Avengers are forced to ally themselves with Magneto and the other inverted villains to stop the X-Men and Apocalypse.  These events play out over the remainder of the Axis miniseries.

(Side note number two: Did Remender really need nine extra-sized issues to tell this whole story?  The whole thing would very comfortably have fit into a mere six issues.  I liked Axis, but it definitely suffered from being padded out with tons of fight scenes that played out over a bunch of splash pages and double-page spreads.)

Finally coming to Axis #9, with Jim Cheung artwork, Rogers and the inverted villains attempt to recreate the inversion spell.  Doctor Doom manages to summon Doctor Voodoo and his ghostly brother, and they take possession of the inverted Scarlet Witch.  Doom and the possessed Witch catch up with Rogers, who has located the Red Skull.  The man who was once the personification of human evil has been inverted into the remorseful White Skull… seriously, even his mask turned white.  How did that happen?

The White Skull begs Magneto not to once again resort to murder, to not kill Iron Man, and allow the new inversion spell to undo the damage.  Magneto reluctantly agrees.  Doom, the Skull, and the possessed Witch re-enact the inversion, turning everyone back to normal.  Well, almost everyone.  Iron Man, who refuses to go back to how he once was, is able to shield himself, and both Havok and Sabretooth are caught in his energy field.  That means Havok is still a violent fanatic who hates humans, Sabretooth still has a conscience, and Stark is still a douchebag.  Oh, well, can’t win ‘em all!

In the closing pages of Axis #9, Rogue and the Scarlet Witch form a new Avengers Unity Squad, hoping to bridge the gap between humans and mutants so that a disaster such as this never occurs again.  Magneto, however, is in no mood to celebrate, realizing that Doctor Doom, the Red Skull and Iron Man have all escaped.  We see that the Skull is now the prisoner of Doom, a potential weapon to be used by the Latverian tyrant in the future.

Hopefully Magneto and the Red Skull will meet again.  Theirs is a dramatic, powerful enmity driven by mutual contempt & hatred.  They are simultaneously alike and as different as night & day.  Much can be revealed about Magneto through the comparing & contrasting of him to the Skull.

Magneto, as re-envisioned by Chris Claremont to be a survivor of the Holocaust, is undoubtedly a complex, complicated and morally ambiguous individual.  One can certainly see Magneto as the personification of Friedrich Nietzsche’s famous warning “Whoever fights monsters should see to it that in the process he does not become a monster.” Likewise the character appears to embody the old saying “The road to hell is paved with good intentions.”

I have often regarded Magneto as a tragic but dangerous figure.  He is a man who experienced horrific losses in his childhood & early adulthood, and who is unable or unwilling to let go of the past.  All of this has led him to fanatical extremes.

The Red Skull commits evil acts because he is a psychopath.  Magneto, on the other hand, is driven by fear and guilt, by a burning obsession to never again become a victim.  Unlike the Skull, it is certainly possible to understand, even sympathize with Magneto.  But if in the end by his actions Magneto arrives at exactly the same place as the Skull, as an unrepentant monster, than all the rationalizations in the world are meaningless.