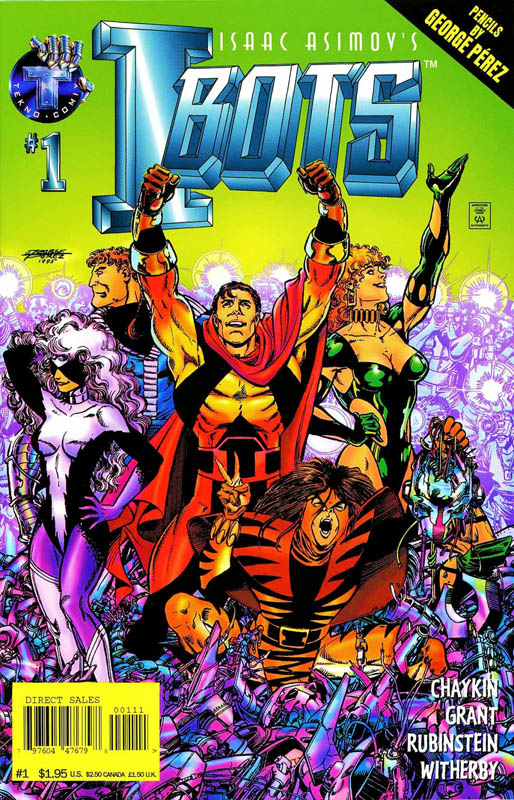 Welcome to another edition of Super-Blog Team-Up! This time myself and my fellow bloggers are going to be taking a look at the works of legendary comic book creator George Perez. As you are probably aware, Perez has unfortunately been suffering from medical issues over the last several years, and was recently diagnosed with pancreatic cancer. Perez’s many, many fans have been reaching out with tributes, to let him know while he is still with us just how much we appreciate him and his amazing work.

Last month I did spotlight some of Perez’s great art from his historic Wonder Woman run. This time, I wanted to take a look at a much less-known series Perez worked on: I-BOTS, published by Tekno Comix, aka Big Entertainment.

I’ve commented before that the early to mid 1990s was a bit like the Wild West of comic books, with numerous new publishers popping up to try to ride the wave of comic book popularity (which was unfortunately at least in part inflated by speculators). Tekno Comix / Big Entertainment was one of these publishers, and they were in existence from 1995 to 1997. During their short existence they published some interesting series helmed by an impressive line-up of writers & artists.

Tekno’s shtick was that they got a number of big-name creators to pitch some basic, bare-bones concepts which were then fleshed out by other writers & editors into ongoing series. Among the names that Tekno went to for ideas were Gene Roddenberry, Leonard Nimoy, Mickey Spillane and Neil Gaiman. I don’t know if the exact level of involvement in these creators in the monthly titles has ever been documented, but in most cases I expect that it was minimal.

That certainly has to be the case with science fiction grandmaster Isaac Asimov, who was credited with creating I-BOTS. Asimov passed away in 1992, three years before Tekno began publishing. Legend has it that the totality of Asimov’s contributions was scribbling “Robots as superheroes” on a cocktail napkin, or something to that effect.

The actual credits on I-BOTS read “Based on concepts created by Isaac Asimov and developed by Howard Chaykin” and I certainly believe that Chaykin, a brilliant creative force himself, did all of the heavy lifting in devising I-BOTS. The stories were plotted & scripted by Chaykin’s friend Steven Grant, another talented creator with a penchant for thinking outside the box. I-BOTS was edited by horror novelist James Chambers.

So what did I-BOTS have going for it? Well, in addition to Chaykin and Grant (nothing to sneeze at, to be sure) it has the incomparable George Perez. I-BOTS ran for 16 issues over two volumes, and the first six issues featured artwork by Perez.

Chambers was kind enough to share with me his thoughts about working with Perez on this series:

“Working with George was a bit surreal. I’d grown up reading so many comics he drew, it was an amazing opportunity to actually work with him. He was incredibly nice to work with and brought boundless inspiration to the project. I believe the first piece he delivered was the cover to issue one of I-BOTS, and the entire editorial department gathered to see it. It was full of George’s energy, a super-hero team in dynamic poses surrounded by an army of shattered robots, classic Perez debris.”

Most of the Tekno series could be classified as pulp sci-fi, dark fantasy or noir. I-BOTS was the one book that was closest to a traditional superhero series, although even then it had one foot firmly in science fiction. Set in what appears to be the not-too-distant future (Grant wisely avoids telling us the exact year) I-BOTS features a quintet of artificial humans with extraordinary abilities: Psy-4, Stonewall, Killaine, Radiant and Itazura. They are “robots” along the lines of the replicants from Blade Runner, the Cylons from the reboot of Battlestar Galactica, and the original fictional robots from the 1920 stage play R.U.R. by Karel Čapek. In other words, the I-BOTS are organic beings who are manufactured rather than born.

The “I” in I-BOTS stands for “Independent” as they are sentient beings with free will. However, echoing the “Three Laws of Robotics” that Asimov introduced in his fiction, the I-BOTS are also designed by their creator Zac Robillard to serve & protect humans, and to never harm them. This is one part of the impetus for them becoming costumed crimefighters. The other part is that the I-BOTS are on the run from the multinational technology conglomerate WorldTech and its ruthless CEO Annabelle Brennan. By establishing themselves as heroes, the I-BOTS attempt to find protection in the public eye.

Perez reportedly was not enthusiastic about I-BOTS, which is why he left after the first six issues (this is according to Wikipedia, not quite an unimpeachable source, so take it with a grain of salt). Nevertheless, Perez has always been a consummate professional, and his work on those half dozen comic books is of a very high caliber.

Perez penciled & inked all six covers, imbuing them with his characteristic hyper-detail & dynamic energy. He provided full pencils on the interiors for the first two issues, complemented by inking from Josef Rubinstein & Mike Witherby. Issue three had the first half penciled by Perez, with the second half penciled by Jose Delbo over Perez’s layouts. I found that to be an interesting collaboration, as Perez was the creative figure who defined Wonder Woman after Crisis On Infinite Earths, and Delbo had previously been the artist on the Wonder Woman series from 1976 to 1981.

Perez again penciled the first half of issue #4, with another comic book legend, the great Gil Kane, coming on to pencil a solo adventure of Radiant in the back half. Perez penciled most of issue #5, although several pages had Brian Kong providing finished pencils over Perez’s layouts. At the time Kong had only been a professional artist for two years, but he nevertheless did a very solid job here, matching the quality of Perez’s work. Kong also penciled a pin-up for issue #6, and he would later contribute a pair of really nice covers for I-BOTS after Perez’s departure.

Issue #6, Perez’s swan song, saw him only contributing layouts, although the finished pencils by Art Nichols and inking by Rubinstein were quite effective, and the whole artistic package worked well to close out the I-BOTS first story arc.

Kong generously shared his thoughts about working with George Perez on I-BOTS:

“Let me start off first by saying that George Perez was my favorite comic book artist growing up and I was heavily influenced by his Teen Titans work, it’s what made me want to become a comic book artist. By the time Tekno comics had launched ( 95-96? ) I had roughly a year of professional comic book work under my belt. I remember talking to editor Jim Chambers at conventions and showing pencilled samples of my work to him. He had mentioned they were interested in my work, but a few months had gone by and nothing transpired,until… I remember sitting in my dentist office waiting for my appointment, I heard laughter, then out walks George Perez. Having been a huge fan of his work growing up, I shouted out “You’re George Perez!” (Total fanboy moment). He seemed surprised at first, but I quickly introduced myself & we chatted for a few minutes and he was on his way.

“A few days later I got a call from Jim Chambers who said they wanted me to finish penciling I-BOTS over George Perez’s breakdowns for 10 pages and that George highly recommended me. I believe I was 21 years old at the time so getting to work with my childhood idol was a definite highlight. I remember getting the pages and being impressed with how much details were still in the breakdowns. For those that don’t know “breakdowns” are usually very rough indications of figures ( more for placement and layout). Just staring at George’s work, I had learned a lot. I must admit I was a little nervous at first but I had a job to do and I did not want to disappoint. I remember trying to do my best George Perez impersonation and putting tons of detail into the penciled pages. I was also inked by another comic legend Joe Rubenstein. The fact that George had recommended me, a still relative “newbie” in the industry to finish up his work was a huge honor for me and I will be forever grateful. Thank you George, for all your years of hard work and inspiration.”

I feel the above splash page from issue #4 featuring Killaine hurtling though the Pacific Ocean really demonstrates the level of craft Perez brought to I-BOTS. Perez’s penciling, Rubinstein’s inking and the coloring by Prismacolor all worked together to create a really beautiful, dynamic image here.

In any case, even on the segments where Perez provided “only” layouts, the finished art still looks very much like his work, because he has a distinctive style of storytelling, of laying out pages. Perez has always excelled at rendering scenes with multiple characters and at depicting complex action sequences. His layouts on I-BOTS definitely contain those qualities.

I haven’t gone into too many specifics about I-BOTS because I feel it is a series that is worth seeking out. I believe copies of most of the issues can be found for sale relatively inexpensively on eBay and from online retailers.  I definitely recommend getting them. Steven Grant wrote some solid stories. The artwork was of a high caliber, with Perez followed by the great, underrated Pat Broderick.

I will probably do a follow-up piece in the near future looking at the post-Perez issues of I-BOTS. Stay tuned.

Please check out the other Super Blog Team-Up entries for further spotlights on the amazing work of George Perez:

Source Material – The Brave and the Bold #1-6