Yesterday our cat Nettie Netzach gave us a huge scare.

I’m working from home, so Michele went out early in the morning to pick up groceries.  She always goes early because too many people are walking around without masks & gloves, so the earlier in the day she goes the less likely she is to run into a lot of people.  Michele ended up getting a lot of stuff so she would not have to go back out again for a while, and she called me to meet her halfway to help carry the bags.  When we got home we were spraying & wiping everything down with Lysol outside in the hallway, then bringing it into the apartment, so we went in & out several times.

About an hour later, around noon, we realized that Nettie wasn’t around.  The last time I saw her was before I went out to help Michele with the groceries.  We started shaking the treat bags.  Jet Alister, our other cat, came bounding out, but there was no sign of Nettie.  We started looking for her.  We turned the place upside down trying to find her.  Still no Nettie.

Michele and I started to worry that with all of our going in & out of the apartment, somehow Nettie had managed to slip out, and was now lost outside.  I went outside looking for Nettie, calling her name, shaking a bag of treats.  No luck.  Then Michele went out to look.  She couldn’t find Nettie.  I went out again, walking up & down the nearby streets, peering under cars, asking everyone I met if they had seen a white cat.  No one had.

By now we were on the verge of panic.  Nettie was microchipped, so Michele called the vet to report her missing.  I left a voicemail for our friend Diana, who feeds the stray cats in the neighborhood, asking for her to keep an eye out for Nettie.

And then, around 4:30 in the afternoon, Nettie just casually poked her head out from under our couch. 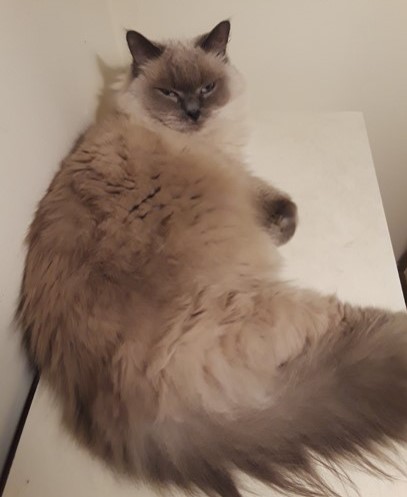 To say that Michele and I were relieved would be an understatement.  I grabbed Nettie and starting hugging her, crying tears of relief.  Michele sternly told her “Do you know how much trouble you’ve caused us?!?”

Nettie of course reacted to all this by becoming very annoyed and indignant, giving us a low growl and a scowling look.  Oh, wow, what a spoiled, bratty cat!

Michele and I later figured out that Nettie must have clawed a hole in the bottom of the couch and crawled inside.  So every time we pulled it away from the wall to check under and behind it we didn’t see her because she was actually inside the sofa.

Michele called the vet back to tell them we found Nettie.  The vet informed us that this sort of thing happens with cats often when they are stressed out, and sensing stress from their humans.  Between having to adjust to Jet Alister, who has only been with us for five months, and having us at home all the time stressed out about the Coronavirus crisis, Nettie must have decided to find somewhere quiet & isolated for a few hours to be by herself.

I took the above photo of Nettie about half an hour after she reappeared.  As you can see, she’s giving me a sort of defiant, moody expression, as if to say “Why are you still bothering me?”

Anyway, thankfully it all worked out in the end.  We definitely need to keep a closer eye on Nettie, though. She can be a real sneak when she wants to be.