I never thought I would get a Joe Sinnott sketch. I had met the legendary and talented comic book artist on several occasions, but somehow the opportunity to get artwork from him just never came up. When he announced his retirement earlier this year I figured that was it, whatever chance there might have been had passed.

Earlier this month, on June 8th, my girlfriend Michele Witchipoo had a table at IncrediCon in Middletown NY. I would have gone with her, but our cat Squeaky wasn’t feeling well and we decided I should stay home to keep her company (sadly Squeaky would pass away a week later). Michele took along my Avengers Assemble theme sketchbook because a friend of hers who was going wanted to see it, and just in case she met anyone there who might want to do a drawing in it.

Joe Sinnott was going to be a guest at IncrediCon. Michele said she could ask if he was drawing, and if he was she would try to get me a sketch for my birthday. I shrugged and replied “He’s 92 years old and he retired a few months ago. I doubt he’s going to be sketching. But if you want you can ask him.” Michele asked me what character I wanted and I said something like “Thor or anyone from the Fantastic Four.”

A few hours later I get a text from Michele: “You’re getting a Thor sketch.” My jaw hit the floor. I honestly did not expect that Sinnott would be drawing. Then about 15 minutes later she sent me a photo of the sketch. Whoa!!!

I’m really thrilled to get this. Joe Sinnott inked Jack Kirby’s pencils on the very first Thor story in Journey Into Mystery #83 way back in 1962, and then drew the full art, pencils & inks, for a few more of the early Thor stories in Journey Into Mystery. For most of the 1970s Sinnott was the regular inker on the Thor book, usually over John Buscema’s pencils, but also working with Rich Buckler on several issues, and even on a couple penciled by Neal Adams. Sinnott returned to Thor from 1989 to 1991, this time paired with penciler Ron Frenz.

That was when I first began reading comic books regularly, in 1989. The Tom DeFalco / Ron Frenz run on Thor remains a favorite of mine, especially the issues that were inked / embellished by Sinnott.

The first time I met Sinnott was at a comic book convention at the Westchester County Center in White Plains NY in 1992.  I was in awe at meeting an artist who had worked on so many amazing comic book stories for Marvel Comics over the years.  Sinnott was a very nice, patient, down-to-Earth person who took the time to answer all the questions posed to him by a gushing teenage fan.  I’ve met Sinnott on subsequent occasions and gotten several books autographed by him. Nevertheless, I will always treasure that copy of Thor #414 he signed for me back in 1992. 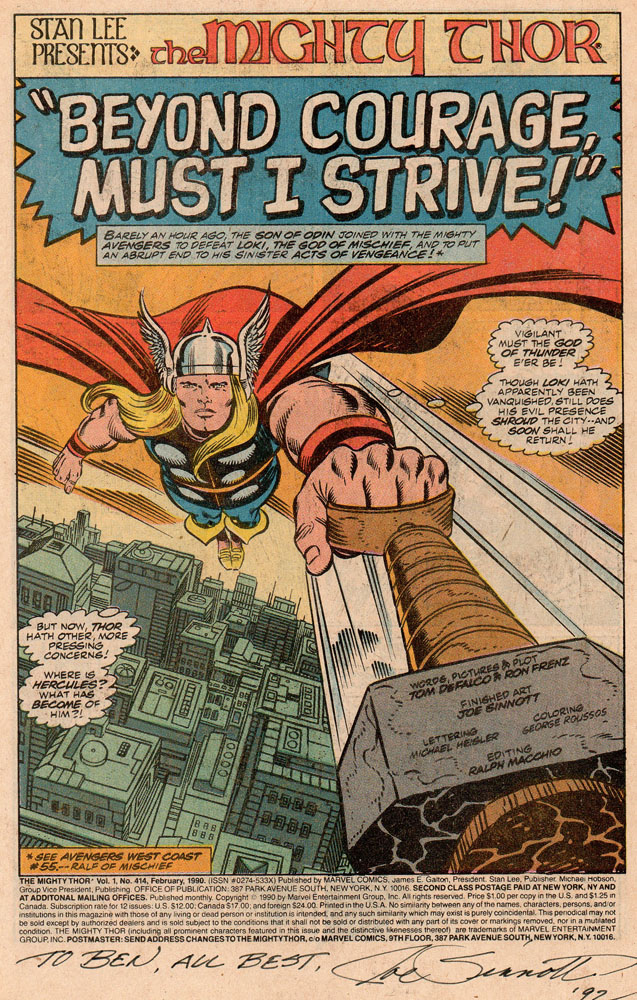 In any case, Sinnott possesses a long, historic association with the character of Thor.  So it’s wonderful to have obtained a sketch of the Norse god of thunder and founding member of the Avengers from him. And, as I said above, when I saw the piece he drew in my sketchbook I was seriously in awe. At 92 years old Sinnott is still an incredible artist. The detailed pencil work on this piece is amazing. Also, I like how Sinnott added birds (seagulls?) in the sky behind Thor in this sketch. Nice subtle bit that adds a little atmosphere to it.

Today is my actual birthday. So, once again, a very big “thank you” to Michele for this birthday present, to Joe Sinnott for the wonderful sketch, and to Joe’s son Mark Sinnott for all his help in making it happen.

One thought on “Thor by Joe Sinnott: a birthday present”