As we enter 2018, let’s take a look back on one of the best comic book series to be published last year.

The Divided States of Hysteria is written & drawn by Howard Chaykin, lettered by Ken Bruzenak, and colored by Jesus Aburtov & Wil Quintana. The six issue series was published by Image Comics. 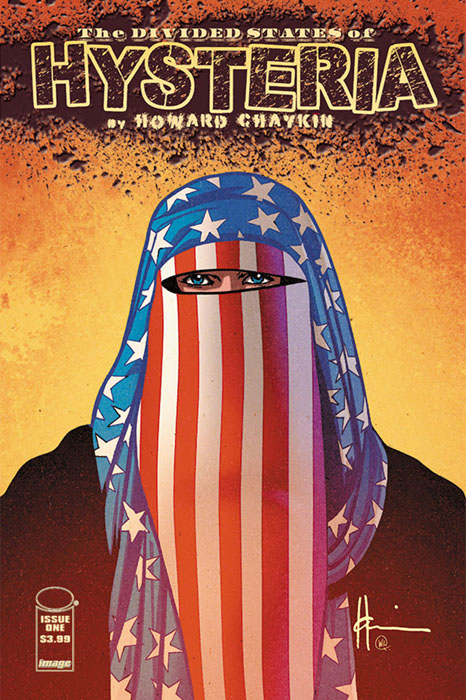 Chaykin is a creator who is no stranger to controversy, but The Divided States of Hysteria definitely generated more than its fair share. In addition to excessive levels of violence & sex, the series broaches upon a number of divisive political, economic and societal issues currently facing the United States.  It also contains graphic depictions of hate crimes.

Set in a reality all-too-similar to our own, the first issue of The Divided States of Hysteria opens one month after the President of the United States and most of the Cabinet have been assassinated in a failed coup d’état. CIA field officer Frank Villa is convinced that a massive terrorist attack is imminent, one that could push the already-destabilized nation into total chaos.  Frank is correct about the timing, but not the location, and to everyone’s horror a major American city is totally obliterated by militant Islamic suicide bombers armed with nuclear devices.

The vulnerable American government makes Frank the scapegoat for the failure to prevent the attack. His family dead, his career ruined, and his reputation in tatters, Frank receives an offer from Chandler Vandergyle, the CEO of River Run Inc, an amoral corporation that runs much of the nation’s prisons and security services.  Vandergyle wants Frank to organize & lead a covert unit to hunt down the heads of the subversive factions who conspired to carry out the terrorist attack.

Vandergyle knows the government is on the verge of collapsing, and the country is literally pulling itself apart, with numerous different ethnic, religious & economic groups engaging in violent acts against one another.  He hopes that a high-profile elimination of the terrorist leaders will shore up the Presidency and restore a degree of national stability, thereby enabling River Run to continue making obscene amounts of money.

Not having any other options, Frank reluctantly accepts the deal. He recruits a quartet of convicted murderers who are serving time in a maximum-security prison owned & managed by River Run.  Each of these four convicts has a tangential link to one of the terrorist organizations, and Frank hopes to utilize those connections, as well as the convicted killers’ aptitude for killing, to locate & eliminate the “bad actors” behind the bombing. 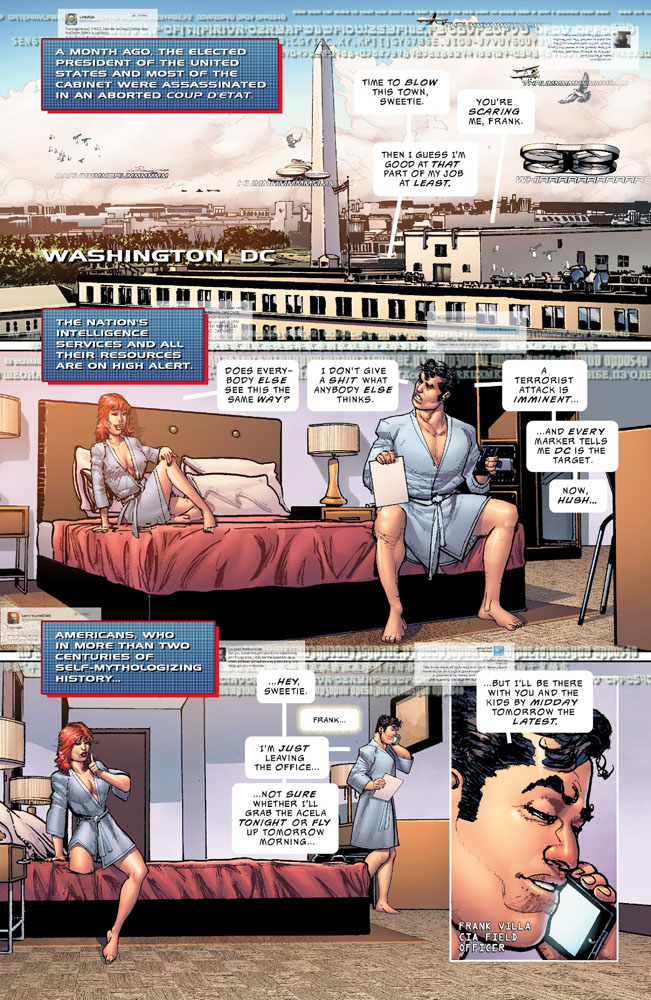 Frank is a very flawed, damaged character. Even before the terrorist attack he was an arrogant, overconfident, womanizing asshole.  Shattered by his failure to prevent the bombing, Frank takes the assignment because he literally has no other choices.  He is flailing about in the dark, motivated by little more than a half-baked desire to make up for his immense error in judgment that resulted in millions of people getting killed.

The closest thing to a moral center in The Divided States of Hysteria is Christopher “Chrissie” Silver, a transgender prostitute who identifies as a woman. Unlike the other convicts, who are all mass murderers & serial killers, Chrissie has been railroaded into a life sentence for killing three homophobic men in self-defense.

Chrissie is a smartass and a flirt. She is very much motivated by self-preservation, but she also possesses a certain degree of empathy & morality.  She soon perceives that Frank is stumbling around in a fog of uncertainty, and quickly takes the initiative to save both their lives.

There had been criticisms of the early issues that Chrissie was a stereotype, that she was poorly depicted, that the transphobic attack against her was clichéd and exploitative. I can understand the reasoning behind these criticisms, and early on perhaps Chrissie is somewhat thinly written, Nevertheless, as the story progresses I think she becomes its strongest protagonist.

The mastermind who organized the various disparate terrorist groups to work together is Leo Nichols aka Leonid Nikolyukov, a Russian oil oligarch turned American venture capitalist and movie producer. Chaykin initially conceived The Divided States of Hysteria in early 2016, when it appeared that Hillary Clinton would likely be the next President of the United States.  I have no idea how far along Chaykin was in his work on the series when Donald Trump won the election under a cloud of foreign interference & voter suppression, but the character of Leo Nicols nevertheless feels like a response to that.

Nicols is a wealthy Russian autocrat who successfully manipulates both financial institutions & mass media to severely undermine the stability of the United States; he is very much akin to the real-life individuals who were behind the dissemination of divisive propaganda during the 2016 campaign and who are now undoubtedly pulling Trump’s strings.

Of course Chaykin has often been a very insightful & prescient author, going back to his work in the early 1980s on the groundbreaking American Flagg! at First Comics. So it is quite possible that all of the details of The Divided States of Hysteria were already worked out prior to November 2016. 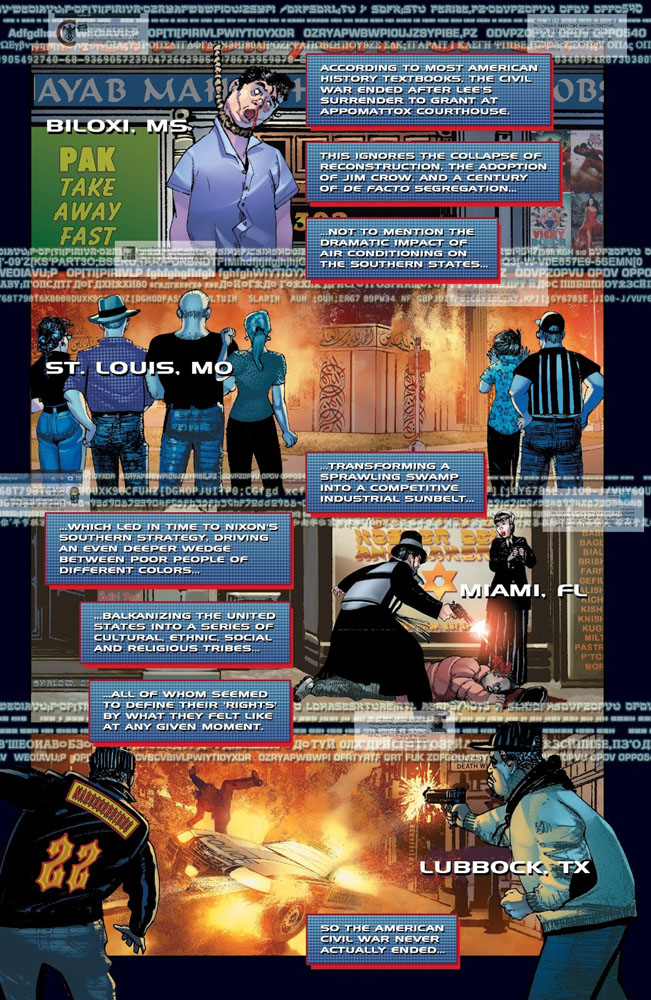 In an era when many single issues of comic books cost four bucks and take less than ten minutes to read, I found The Divided States of Hysteria refreshing. Chaykin’s plotting is dense, his scripting diffuse.  It took me quite a bit of time to read each of the six issues making up this arc.  I also found the series to be richer upon re-reading the earlier issues.  It is a fairly complex story.

Chaykin demonstrates there really is no difference between a “terrorist” like Nichols and a “patriot” like Vandergyle.  Both are aspects of the so-called military industrial complex.  The only thing that separates them is that one profits from destabilizing the United States, and the other profits from controlling it from behind the scenes.  The rest of us are just poor schmucks like Frank and Chrissie who are subject to events beyond our control.

Chaykin’s skepticism is reserved not just for those on the right, but also on the left.  As he writes in his editorial in issue #6…

“The right isn’t going to get a white-European America back. The left will never get a table where everybody sits at the head. The damage that has been done by our rulers and their masters to our country, and thus by extension to the world, will not be repaired in the time I have left on this planet.”

In spite of the series’ earnest, angry tone of outrage, the first arc ends on what is, all things considered, a fairly upbeat note. Certainly the conclusion was much more optimistic than I had been expecting.

This is only my impression, but having read a fair amount of his work I get the feeling that Chaykin is one of those people who, even though he knows how utterly unlikely it is, nevertheless sincerely hopes that one day things might finally work out for the best. 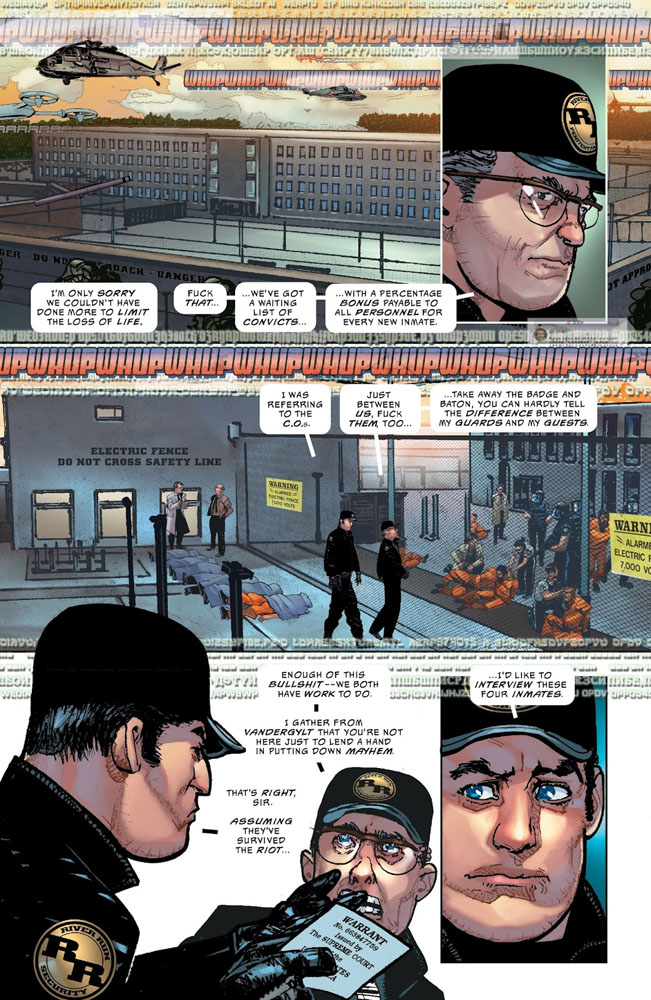 Chaykin does excellent work illustrating The Divided States of Hysteria. He expertly renders a large cast of characters in a multitude of settings.  At times I did find some of his layouts a bit confusing, the flow of action and the jumps from one scene to the next rather disjointed.  From time to time it can be a bit difficult to tell certain characters apart.  For the most part, though, Chaykin’s work as an artist here is effective.

Each of Chaykin’s covers for these issues are all very striking, a series of symbolic images that encapsulate the discord that has swept through the country, the clash of cultures and the atmosphere of fear. The color work by both Jesus Aburtov & Wil Quintana on these is striking.

Chaykin has worked regularly with letterer Ken Bruzenak since American Flagg! Bruzenak does a fine job on The Divided States of Hysteria.  In addition to his lettering of the dialogue & narration, Bruzenak also gives us a background “buzz” of electronic chatter and social media nattering.  This drives home the chaos & confusion brought about by the information, and disinformation, of the electronic age, driving home the omnipresent “noise” of the internet that often serves to distract or misinform the populace.  This “swarm” of data is juxtaposed with the ever-present drones populating the sky, signifiers of the twin intrusions of propaganda and a police state into our society.

The Divided States of Hysteria is a rich, complex, thought-provoking, deeply personal story from Howard Chaykin. The trade paperback collection is due out on January 10th.  I highly recommend it.

5 thoughts on “Comic book reviews: The Divided States of Hysteria”