One hundred years ago this month, the Russian Revolution took place, bringing into power Vladimir Lenin and the Bolsheviks.   Inspired by the writings of Karl Marx, the Soviet Union was ostensibly founded upon the rights of the working class; in reality the country’s new communist government soon became a monstrous dictatorship whose crimes rivaled that of the Tsarist autocracy that it had replaced.

“The thing is, communism can never work in practice. It just doesn’t take account of human nature; the fact that most people are greedy, lazy, selfish, power-hungry or just too plain stupid to work for the benefit of everybody, not just themselves. All we ever had were perversions of this arcadian ideal; The tyranny of Stalin, the repression of the Chinese state.”

Over the succeeding decades various dissident groups rose up within both the Soviet Union and in the Eastern European satellite nations seized after World War II. Among these were “reform communists” who thought it possible to steer the Soviet Union into a better direction.

One of these “reform communist” groups, supposedly, was the Progressive Political Pornographic Party, which formed in the 1960s. Apparently inspired by American underground comix, the PPPP created the character of Octobriana in their self-published periodical Mtsyry.  Octobriana was a beautiful Slavic super-human warrior woman who embodied the true, uncorrupted principles of communism and the Russian Revolution.

Or so the story goes, at least according to Petr Sadecky, a Czechoslovakian-born cartoonist who stated he had become involved in 1961 with the PPPP’s resistance cell in Kiev. As comic book writer & historian John A. Short explains:

“Sadecky claims that in 1967 he escaped to the West and managed to smuggle out copies of the Octobriana strips, photographs of the PPPP and other examples of the group’s work. He packaged all of this together into the book, Octobriana and the Russian Underground, which was released in a number of countries during 1971.”

Evidence would later crop to indicate that the PPPP did not actually exist and that Sadecky had actually stolen artwork created by Czech cartoonists Zdeněk Burian, Bohuslav Konečný and Miloš Novak.  Nevertheless, despite the highly dubious nature of Sadecky’s claims, and the probable theft he engaged in, Octobriana gradually took root in the underground comix community throughout the 1970s.

By virtue of the fact that Octobriana was supposedly created by a group of dissident communists, and by Sadecky disappearing from public view following the publication of his book (reportedly passing away in 1991), the character instantly became part of the public domain.  That meant that anyone who wanted to use her in their own comic books could do just that.

The individual who really brought Octobriana into the public consciousness is British creator Bryan Talbot. He had first learned of Octobriana in the very early 1970s, and was immediately intrigued by the character.  He saw Octobriana as representing both “the pure spirit of communism” and “sexual liberation, both in the sense of sexual equality and of free love.”

Between 1978 and 1989 Talbot crafted his sprawling mulitiversal sci-fi political thriller The Adventures of Luther Arkwright.  Talbot used Octobriana as a supporting character in the early chapters of his saga.  The Adventures of Luther Arkwright was reprinted here in the States by Dark Horse in the early 1990s.  Talbot’s rich, detailed, illustrative art style resulted in a stunning, iconic depiction of Octobriana, particularly on the cover of the third Dark Horse issue. 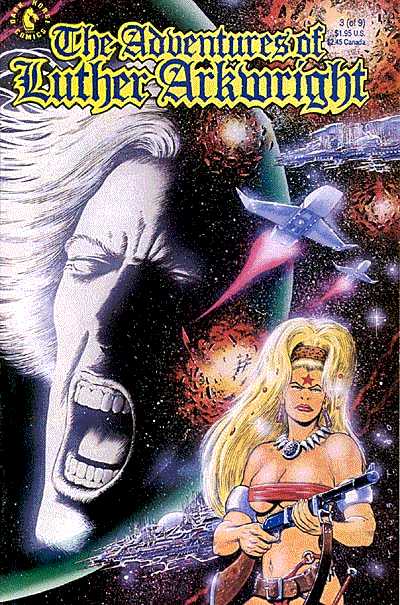 Two other comic book creators who became intrigued by Octobriana were John A. Short and Stuart Taylor. Between 1996 and 1997, through their Revolution Comics imprint, Short & Taylor released a five issue Octobriana miniseries.  Blake O’Farrell and Darrell Andrews illustrated the miniseries.  Bryan Talbot contributed artwork for the first issue’s cover.

The narrative of each issue was split in two. Taylor wrote a serial set in the late 1960s, which saw Octobriana leading an underground movement against the oppressive Soviet forces.  The Sixties narrative concludes with Octobriana captured by the authorities.  In the second half of each issue, written by Short, events jump forward three decades to the present.  The still-young Octobriana at last escapes from her Siberian prison to fight against her old Communist foes who following the collapse of the Soviet Union have become powerful figures within the Russian Mafia.

A year later Taylor, paired with penciler Dave Roberts & inker Mark Woolley, continued the present-day storyline in the two issue miniseries Octobriana: Filling in the Blanks, published by Artful Salamander. In addition to Cold War mad scientists and Russian mobsters, this time Octobriana also found herself at odds with alien invaders who had arrived on Earth in the meteor that devastated Tunguska nine decades earlier.

In 1999, Short published Octobriana: Underground Tales, which via several text pieces chronicled the character’s history, both in the real word and in her fictional adventures.

The special also included three new short comic book stories. In the first of these, Short mixed fact & fiction to craft “The Legend of Octobriana,” which linked the past and present day segments of the Revolution Comics miniseries.  Short also wrote “Made in America,” which had art by Craig John, which saw Octobriana encountering characters from Short’s creator-owned series Armageddon Patrol about a group of cynical, jingoistic American superheroes fighting in the Vietnam War.  Taylor, Roberts & Woolley returned to provide a piece that bridged the gap between the first miniseries and Filling in the Blanks.  Also included was a reprint of one of the bizarre stories from Octobriana and the Russian Underground.

Short again returned to the Russian she-devil in 2001 via his new company Alchemy Texts with the Octobriana 30th Anniversary Special. Topped off by a striking cover by Shaun Bryan, the Special contained two new, wacky stories written by Short, with artwork by Bryan, Andy Nixon and Rehaan Akhtar. 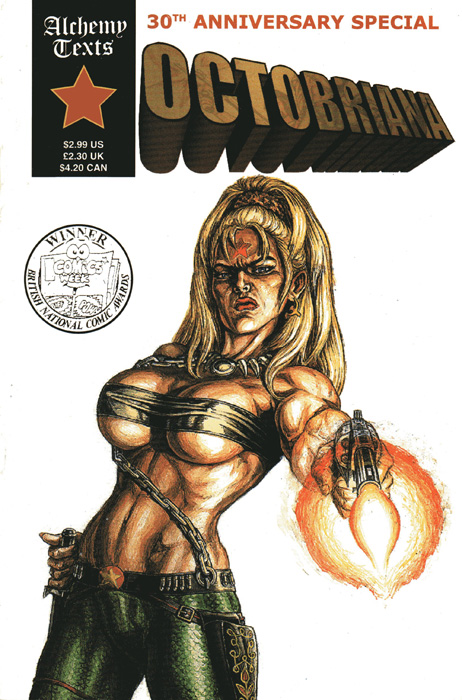 Although the most notable of Octobriana’s appearances, the comic books listed above are far from comprehensive. Due to her public domain nature, Octobriana has popped up in numerous other places, in various incarnations & permutations, as different creators have adapted & interpreted her.

Short himself continues to chronicle the adventures of his version of Octobriana, teaming her up with other female heroes to oppose Russian dictator Vladimir Putin, and assembling a comprehensive look at the character’s history into the book Octobriana: The Underground History, published by Kult Creations.

I first discovered Octobriana via Talbot’s The Adventures of Luther Arkwright and Short’s Underground Tales, and immediately found her intriguing. The amazing visual of a sensual & strong revolutionary, the bizarre circumstances of her creation, and the utilization of her by numerous comic book creators across the globe made her a compelling figure.

In 2008 Talbot was a guest at a comic book convention in New York City. I asked him if he could do a drawing of Octobriana for me.  He was kind enough to draw a very nice piece for me in one of my convention sketchbooks.  I was thrilled to obtain an illustration of Octobriana from the artist who did one of the definitive interpretations of the character.

In a world where both the injustices of unregulated capitalism and toxic misogyny are rampant here in the West, and the ghost of Soviet authoritarianism has arisen anew in Russia to subvert & destabilize the world’s democratic institutions, Octobriana is a more timely character than ever. I am certain that we have not seen the last of her.