On more than one occasion I’ve commented that it’s really unfortunate that Savage Dragon by Erik Larsen isn’t a much better seller. There are a couple of reasons for this.  The first is that Larsen’s creator-owned series, which has been published for 25 years now by Image Comics, is a damn fine read. The second is that Larsen, within the pages of Savage Dragon, has created an enormous supporting cast made up of dozens and dozens of really interesting characters. Due to Savage Dragon not ever really being a massive hit, Larsen has only had a few opportunities to feature any of those great characters in spin-off titles.

It’s been quite a few years, but at long last we’ve finally gotten a new Savage Dragon spin-off: the Mighty Man special which came out earlier this month. It’s written by Larsen, drawn & colored by Nikos Koutsis, and lettered by Ferran Delgado.

Mighty Man is Larsen’s homage to the original Captain Marvel created by Bill Parker & C.C. Beck in 1939.  An artificial entity created by the mysterious mystic Fon-Ti, the Mighty Man form has passed from one human host to another for centuries.  Throughout much of the 20th Century it was possessed by Bobby Berman.  Eventually the now-elderly Berman was attacked by muggers while in his regular human form.  Dying, he transferred the Might Man entity to Ann Stevens, a nurse in Chicago.  For several years she fought alongside Dragon and the other super-powered defenders of the Windy City.  Then, in a twist no one saw coming, when Ann became pregnant the Mighty Man entity was somehow passed onto her unborn child Elizabeth.

This current Mighty Man made her debut in Savage Dragon #170 (March 2011). You can just imagine the chaos and confusion that occurred when a one year old baby suddenly found herself transformed into an invulnerable super-powered adult.

In the Mighty Man special, Betty is now seven years old. Realizing that her daughter is going to possess these powers for life, Ann has agreed to let her be trained by veteran crime-fighter SuperPatriot, who previously worked with the last two incarnations of Mighty Man.  Also pitching in to help are several of SuperPatriot’s teammates from the government team Special Operations Strikeforce. 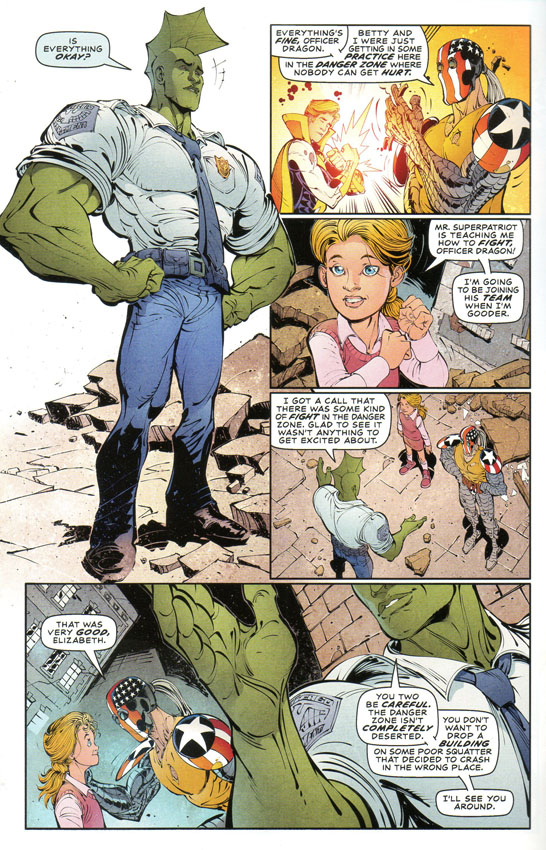 Larsen’s story and dialogue for the Mighty Man special are definitely comedic. He wrote a very fun, lighthearted story, which is appropriate, since I don’t think it’d be too enjoyable to see a pre-teen hero go all grim & gritty.  That’s one of the things I really appreciate about Larsen, he is a versatile creator.

This special is actually something of an informal Freak Force reunion. In addition to SuperPatriot, there are appearances by Ricochet, Barbaric and Horridus.  Freak Force was a fun Savage Dragon spin-off series which ran for 18 issues in the mid-1990s, and it’s always a joy to see those characters get back together.  Also appearing in this special are Malcolm Dragon, as well as Marsha Bradley, a teenager with electrical powers who is Malcolm’s kinda sorta half-sister (long story, don’t ask) who Larsen introduced just a few weeks earlier in Savage Dragon #222.

I’ve been curious what Larsen was going to do with all of his character who joined the SOS now that Trump has gotten into the Oval Office. I really couldn’t see SuperPatriot, who fought the Nazis during World War II, being all that thrilled with having to work for a guy who’s chummy with later-day National Socialists.  Indeed, when we see SuperPatriot on a mission with the SOS in this story, he’s exasperatedly venting to them…

“Christ, it makes me sick! Taking order from President Trump — How did it ever come to this?”

This is a cool tie-in story that fans of Savage Dragon will enjoy, as is provides Larsen with the space to do some more character development for his supporting cast than he is usually able, to explore some story threads from that series, and set up a subplot or two for the future. At the same time, the Mighty Man special also works very well as a stand-alone story, and casual readers will enjoy it.

My only complaint is that the ending of the special is very abrupt. It really needed at least another page to properly wrap things up.

Nikos Koutsis is the regular colorist for Savage Dragon, and he’s also drawn a few back-up stories for the series. I enjoyed seeing him have an opportunity to draw a full-length issue.  Koutsis’ artwork is both cartoony and highly-detailed, which works very well for these characters.  His layouts are very dynamic.

I definitely enjoyed this Mighty Man special. It was a lot of fun.  I really hope that Erik Larsen has further opportunities to publish more Savage Dragon spin-offs in the near future.