Comic book, horror and fantasy artist Bernie Wrightson passed away on March 18th at the age of 68. Wrightson received well-deserved acclaim for his atmospheric artwork in a career that spanned four and a half decades. 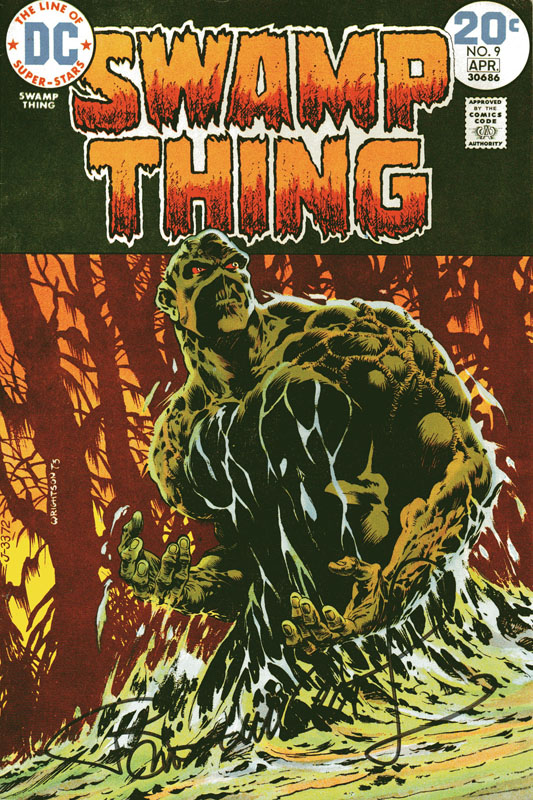 Wrightson is probably best-known as the co-creator of the Swamp Thing character with writer Len Wein. The initial incarnation of the character debuted in a stand-alone story in the DC Comics horror anthology House of Secrets #92 (June/July 1971).  The “Swamp Thing” story was an unexpected hit, and it led to Wein & Wrightson introducing a revamped incarnation of the character a year later.  This ongoing Swamp Thing series was set in the DC universe.  Wrightson drew the first ten issues.  Issue #7 featured a guest appearance by Batman, and Wrightson rendered a stunning, moody depiction of the Caped Crusader.  He would have several more opportunities to draw Batman over the course of his career.

Wrightson was friends with fellow artist Michael Kaluta. In 1974 the two of them had an opportunity to work together on the third and fourth issues of The Shadow, which adapted the pulp vigilante created by Walter Gibson.  A year later Wrightson and Kaluta, along with Jeffrey Jones and Barry Windsor-Smith, began sharing studio space in Lower Manhattan loft, an arrangement that lasted until 1979.  Known as “The Studio,” the four artists influenced one another, each of them creating some of the best works of their careers.

One of Wrightson most stunning efforts was his illustrated edition of Mary Shelley’s novel Frankenstein. Wrightson worked on this project for seven years years, and it was finally published in 1983.  The breathtaking, intricately detailed artwork Wrightson created for Frankenstein is considered to be one of the greatest achievements of his career.

(Honestly, I don’t think you can overdo the superlatives when it comes to describing Wrightson’s Frankenstein illustrations.)

Wrightson remained involved in the comic book biz over the years, drawing numerous covers, pin-ups, miniseries, graphic novels and short stories in anthologies. In the second half of the 1970s he illustrated a number of stories for Warren Publishing’s line of black & white horror magazines.  Wrightson also worked on a handful of projects for Marvel Comics, among them the graphic novels Spider-Man: Hooky (1986) and The Hulk and The Thing: The Big Change (1987), and the four issue miniseries Punisher P.O.V. (1991).  The Big Change and P.O.V. were both written by Jim Starlin.  The two of them also collaborated on the DC Comics miniseries Batman: The Cult (1988).

Among the later comic book work that Wrightson did, I especially enjoyed the two issue Batman/Aliens miniseries published in 1997. Written by Ron Marz, this was one of the more effective of the crossovers released by DC and Dark Horse in the 1990s.  Batman is a superhero who is grounded enough in reality that the Xenomorphs posed a legitimate threat to him without having to ridiculously amp up their powers.  Wrightson’s artwork provided the story with a genuinely moody, intense tone.  As always he drew a striking Batman, and his Xenomorphs were effectively menacing.

I also enjoyed the beautifully grotesque painted covers that Wrightson created for the four issue horror anthology Nightmare Theater published by Chaos! Comics in 1997. They were an excellent showcase for his talents and sensibilities.  Wrightson also penciled a werewolf story for the first issue, which was inked by Jimmy Palmiotti.

Wrightson’s last major project was Frankenstein Alive, Alive! published by IDW between 2012 and 2014.  Written by Steve Niles, the three issue series served as a sequel to Wrightson’s illustrated edition of the Mary Shelley novel. 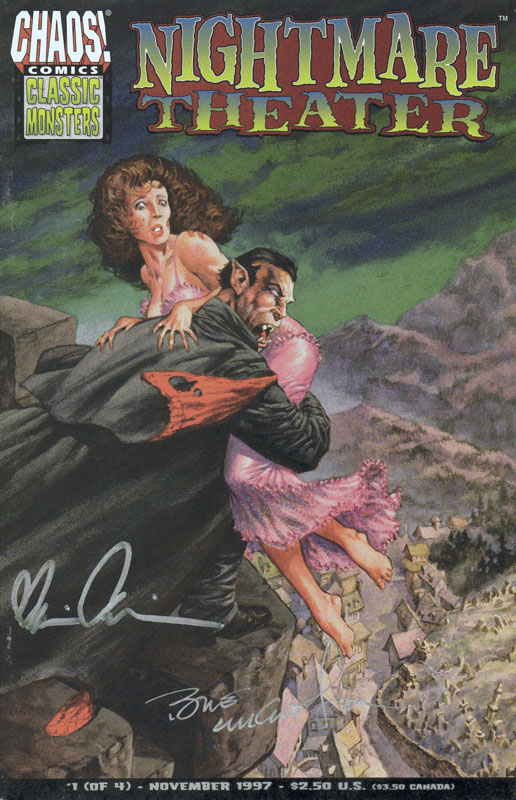 I was fortunate enough to meet Wrightson on a few occasions, at a couple of comic book conventions and at a store signing in White Plains NY. He struck me as a very friendly individual.  Others had similar experiences meeting him.  When the news broke that he has died, it was clear that not only had we lost an immensely talented artist but also a genuinely nice person.  Wrightson will definitely be missed by friends, colleagues, and fans.