This year has been awful. Too many incredibly talented people have died much too young in 2016.  Sadly yet another name has just been added to the list of creators who left us too soon.  British comic book artist Steve Dillon passed away on October 22nd at the age of 54. 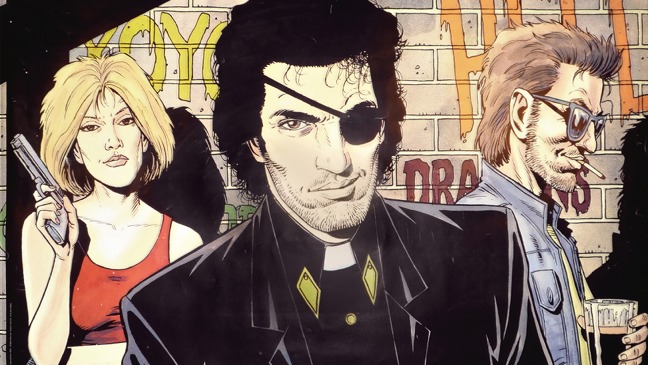 I first encountered Steve Dillon’s work in the mid-1980s when the back-up stories he had drawn in Doctor Who Weekly for Marvel Comics UK were reprinted here in the States. Two of the strips he worked on had lasting impacts on Doctor Who fandom.  “Throwback: The Soul of a Cyberman” ran in Doctor Who Weekly # 5-7 (1979) and “Abslom Daak: Dalek Killer” ran in # 17-20.  Both stories were written by Steve Moore.

“Throwback” introduced Kroton, a being who despite being converted into one of the ruthlessly logical Cybermen somehow retained his emotions. Kroton was a tragic character, neither human nor Cyberman, trapped between two worlds.  This was some of Dillon’s earliest work.  He had a tendency to draw characters crouching in overdramatic poses or gesticulating wildly.  But even at that point Dillon showed genuine potential.  He certainly possessed the skill necessary to give emotion & pathos to the physically expressionless metal form of Kroton.  The bottom three panels of that final page from Doctor Who Weekly #7 always give me an emotional punch in the gut. 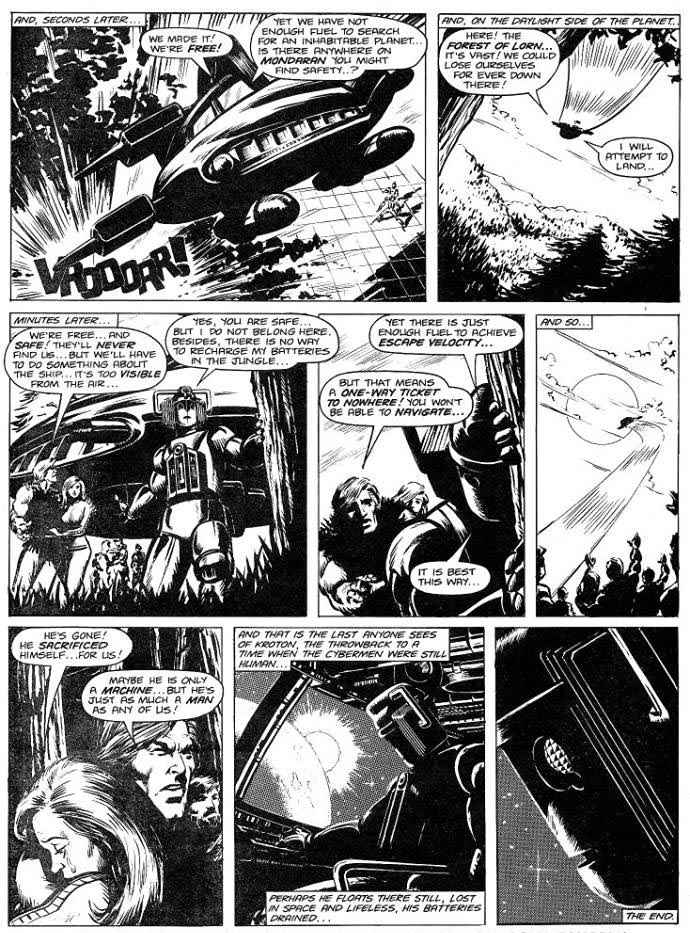 “Dalek Killer” featured the debut of Abslom Daak, a thoroughly unpleasant career criminal. Having been found guilty on multiple counts of murder & piracy, Daak is given two choices: execution by vaporization or Exile D-K.  The sneering Daak rejects vaporization because it’s quick & painless, and instead chooses Exile D-K, which involves being teleported to a world in the heart of the Dalek Empire to wage a hopeless one-man guerilla war against the mutants from Skaro.

Armed to the teeth, Daak is beamed to the planet Mazam, newly conquered by the Daleks. Despite his fervent death wish, the ruthless & brutal Daak manages to survive, in the process liberating Mazam from the Daleks and winning the heart of its ruler Taiyin.  Tragedy strikes, however, when a lone Dalek survivor kills Taiyin.  The grief-stricken Daak’s suicide-run is now supplanted by a mission of vengeance, as he vows to “kill every stinking Dalek in the galaxy!”

Dillon’s artwork on this serial was amazing. This is only a year after “Throwback” and he had already improved tremendously.  Dillon succeeded in humanizing the thuggish, menacing Daak, making him a character both comedic and haunted.  That final page, with Daak carrying Taiyin’s lifeless body, is incredibly powerful & tragic. 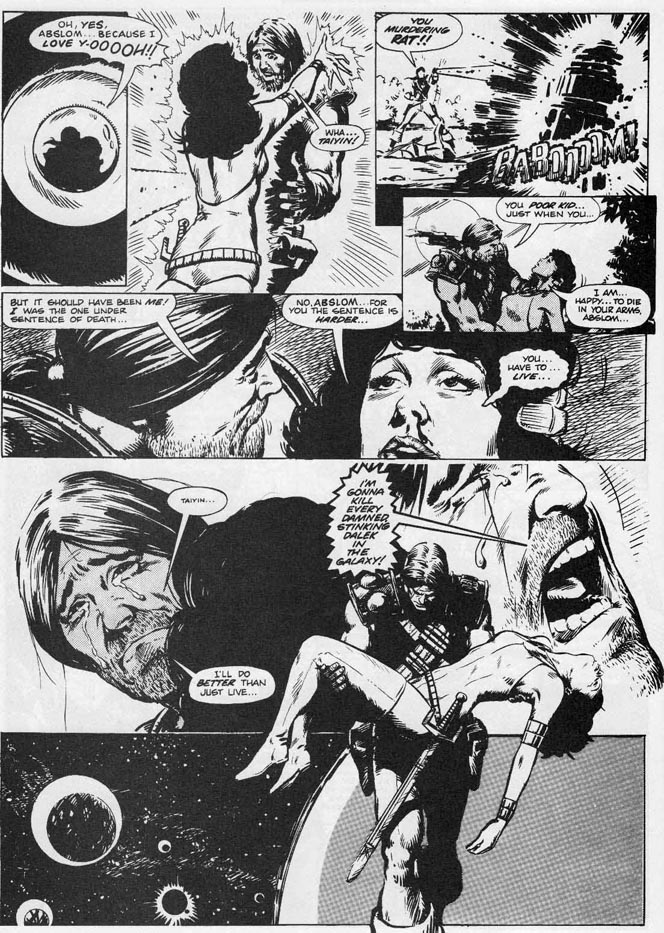 Abslom Daak proved to be tremendously popular, and he has made numerous return appearances in Doctor Who comic books, most recently in The Eleventh Doctor series courtesy of Si Spurrier, Rob Williams & Simon Fraser. Daak even made it into the Doctor Who television series itself when his mug shot was seen in the 2014 episode “Time Heist.”

In the mid-1980s Dillon was a regular artist on the weekly British anthology series 2000 AD, drawing a number of stories featuring Judge Dredd and Rogue Trooper. He also worked on the short-lived but influential anthology series Warrior. 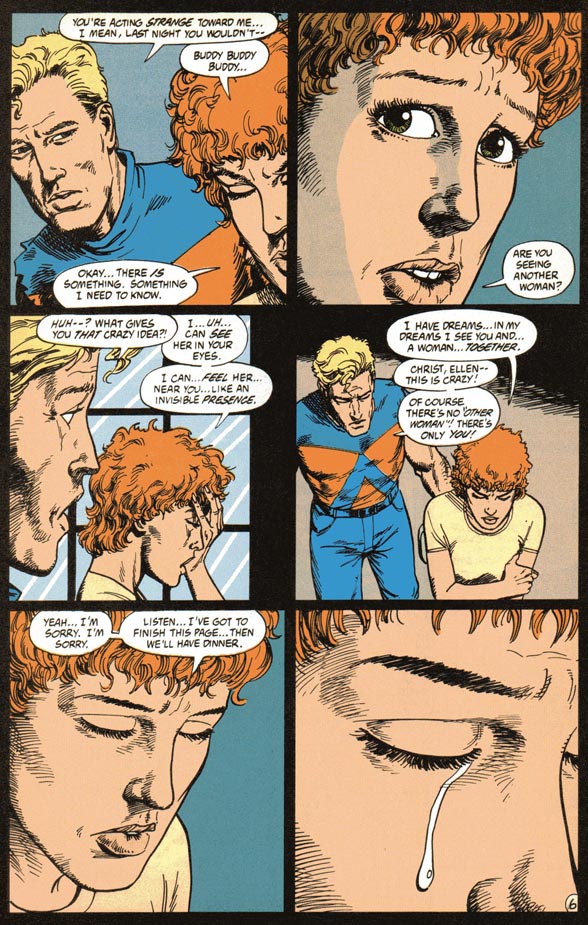 I recall that when I was in high school reading Animal Man and Hellblazer, I found Dillon’s artwork to be rather odd.  It was so very different stylistically from the tone of the flashy, ultra-dynamic work that had become prevalent in mainstream superhero books.  I really don’t think I even realized at that time that Dillon was the same artist who had drawn those Doctor Who comic book stories.  Nevertheless his work stuck in my head because it was so distinctive from ninety percent of what was out there.  It had what I would have to characterize as a starkness to it.

After wrapping up their run on Hellblazer, Ennis & Dillon collaborated on the Vertigo series Preacher, which ran for 66 issues between 1995 and 2000. Dark, brutal, sardonically humorous, and gleefully sacrilegious, Preacher became a critically acclaimed hit.  Underneath all the cynicism and gore, the succession of freaks, degenerates and psychopaths, Preacher was at its heart the story of the relationship between Jesse Custer and Tulip O’Hare.  Dillon ably illustrated all the sick weirdness that Ennis wrote, but he also brought to life Jesse & Tulip, made us believe in their love for one another. 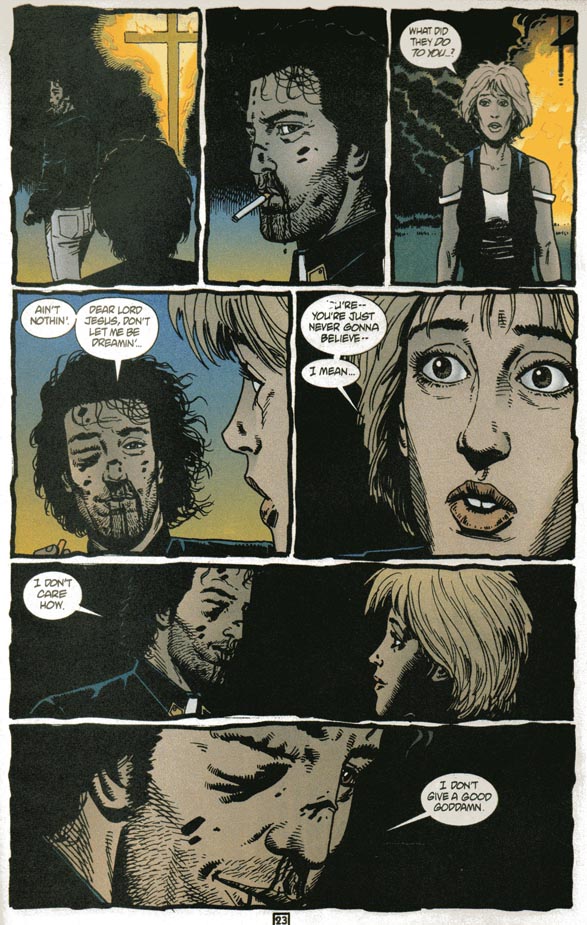 After Preacher wrapped up, Ennis & Dillon went over to Marvel Comics, taking over the Punisher. The pair transformed the then-moribund series into a ultra-violent black comedy.  Ennis also worked on a number of other Marvel titles, most notably a two year run on Wolverine: Origin with writer Daniel Wray.

I have always found Steve Dillon to be an incredibly effective comic book artist. As a non-artist it is perhaps difficult for me to articulate why this is so, but I am going to attempt to do so…

Dillon had a very straightforward, unvarnished style. He did not rely on overly-complex layouts.  He did not utilize excessive amounts of detail.  Dillon’s layouts and sequential illustration were crystal-clear and highly effective.  He absolutely knew how to create drama and tension.  Dillon could illustrate a multi-page sequence featuring nothing more than two characters sitting around taking over a beer and make it the most dramatic thing you could possibly imagine.

Dillon often illustrated stories that featured extreme violence. I think that it’s often the case that when an artist possesses an exaggerated or hyper-detailed style, violence comes across as cartoony or unrealistic or even glamorized.  Dillon, however, had a style that was very much grounded in reality, and so his scenes of violence and gore were starkly, shockingly brutal. 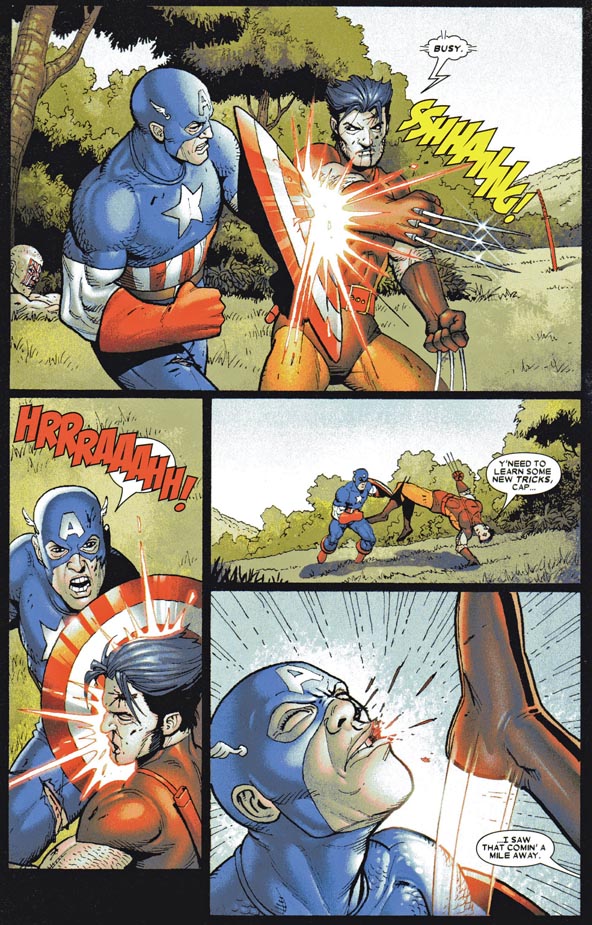 I was fortunate enough to meet Dillon on a couple of occasions. The first time was in 1999, when I was traveling around Britain.  There was a big comic book convention in Bristol, England.  Dillon was one of the guests.  That whole show seemed to revolve around the bar, and most of the guests either had drinks at their tables or were actually doing signings at the pub.  As I recall, Dillon was at one of the tables in the pub drinking a pint.  He was kind enough to autograph an issue of Preacher for me, and to chat for a couple of minutes.  I commented to him that the “Until the End of the World” storyline that ran in issues # 8-12 has seriously freaked me out.  He smiled and responded, “I drew it, and it freaked me out, too.”  I had to laugh at that.

Years later, in 2009, I met Dillon again when he did a signing at Jim Hanley’s Universe here in NYC. Once again he struck me as a nice, friendly guy, and he did a sketch for me of Herr Starr, one of the villains from Preacher.

I was genuinely sorry to find out that Dillon had passed away. He was a tremendously talented artist.  Judging from the comments on Facebook from people who were friends with him or worked with him over the years, he was much-loved by those who knew him.