For a number of years I’ve very much wanted to be able to read the original Black Lightning series created and written by Tony Isabella and penciled by Trevor Von Eeden published by DC Comics in the late 1970s. Due to disagreements between Isabella and DC management, for a time the possibility of a trade paperback seemed extremely unlikely.  Fortunately last year Isabella and DC were able to begin working out these differences, which paved the way for the release of a collection. 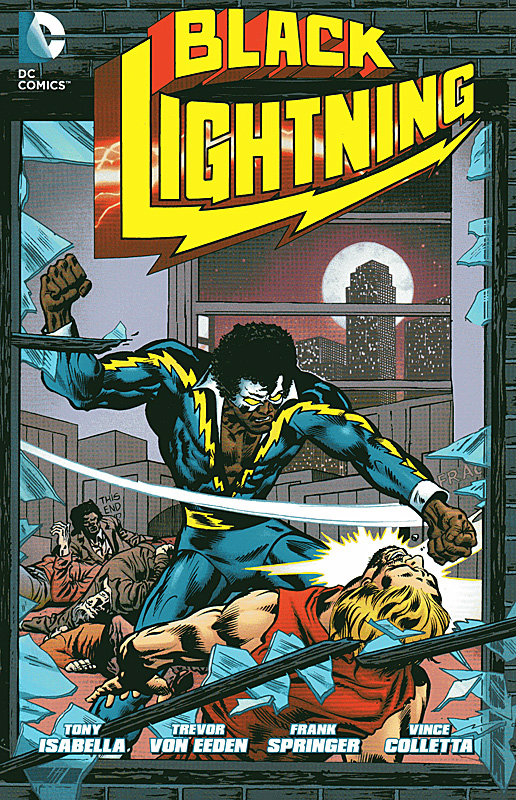 The trade paperback contains the eleven issue run of Black Lightning that was published between April 1977 and September 1978, as well as the material that was originally intended for issue #12 before the series was abruptly cancelled as part of the infamous DC Implosion (it eventually saw print in World’s Finest Comics #260 in December 1979). Isabella wrote the first ten issues, and the final two are by Denny O’Neil.  Von Eeden was the penciler on all of the issues except the last one, which was by Mike Netzer.  The series was edited by Jack C. Harris.

Isabella wrote a brand-new introduction for this volume that details the conception of the series, and the idealism which guided him as a writer:

“I kept thinking about creating a new African-American hero. I wanted a character to whom our young readers could relate, a character who would inspire them as Superman and Captain America had inspired me.”

Jefferson Pierce grew up in the “Suicide Slum” of Metropolis. He possessed both a strong affinity for academics and tremendous athletic abilities.  After winning gold medals at two Olympics, Jefferson went into teaching.  As the first issue opens, Jefferson has returned to Suicide Slum for the first time in years to work at his alma mater Garfield High.  He hopes that just as he was able to escape the crime & poverty of the ghetto, he can help to inspire the next generation to do the same.

Jefferson is alarmed to discover that the organized crime entity known as “The 100” has established a stranglehold on Suicide Slum, and that its drug dealers are a regular presence in the hallways of Garfield High. Jefferson attempts to drive them off, only to see The 100 strike back at him through his students.  This prompts Jefferson, with the aid of his mentor, tailor Peter Gambi, to create the costumed identity of Black Lightning.  Thus disguised, Jefferson launches a one-man war against The 100.

It’s interesting that Isabella decided to set this series in Superman’s hometown. At first it might seem odd that The 100 have taken root in the same city inhabited by the Man of Steel.  But of course Superman has usually specialized in tackling menaces that threaten the entire world.  More importantly, Superman really is not able to do a great deal about the social & economic ills that create fertile ground in which the weed of The 100 flourishes.  So it makes more sense that a “street-level” hero such as Black Lightning, who grew up in Suicide Slum and who knows its people intimately, is more suited to combating The 100.

Nevertheless, Isabella does establish that although The 100 and their Metropolis chief Tobias Whale (imagine Al Capone meets Moby Dick) are primarily concerned with eliminating Black Lightning, they also regard Superman as a potential threat, and so have plans to eventually deal with him. This leads to the two crime-fighters meeting, and Isabella does a fine job highlighting both their differences and their similarities.

It is readily apparent that Black Lightning was a labor of love on Isabella’s part. He put a great deal of thought into who Jefferson Pierce is, what motivates him, how he feels about his students, and his ambivalent feelings regarding his violent alter ego.  In the first ten issues Isabella did excellent work developing the character and establishing his supporting cast.

I wish we could have seen more of Jefferson in his role as a teacher at Garfield High, which was often barely touched upon in these stories. Unfortunately at this time American comic books had been reduced to 17 pages, rather than the usual 22, which severely curtailed the ability of many writers to develop subplots.  Given the abbreviated page count, Isabella no doubt did the best he could in the space provided.  As I recall, years later when Isabella returned to Black Lightning for an acclaimed eight issue run in 1995, he focused as much on Jefferson’s work as a teacher as he did his vigilante activities.

The two stories written by O’Neil are somewhat more underwhelming, at least in my estimation. O’Neil is definitely a very good writer when he is passionate about a character or a story.  His work on Batman is justifiably regarded as legendary.  This, however, just seems more by-the-numbers, at least compared to the energy that Isabella obviously brought to the series. 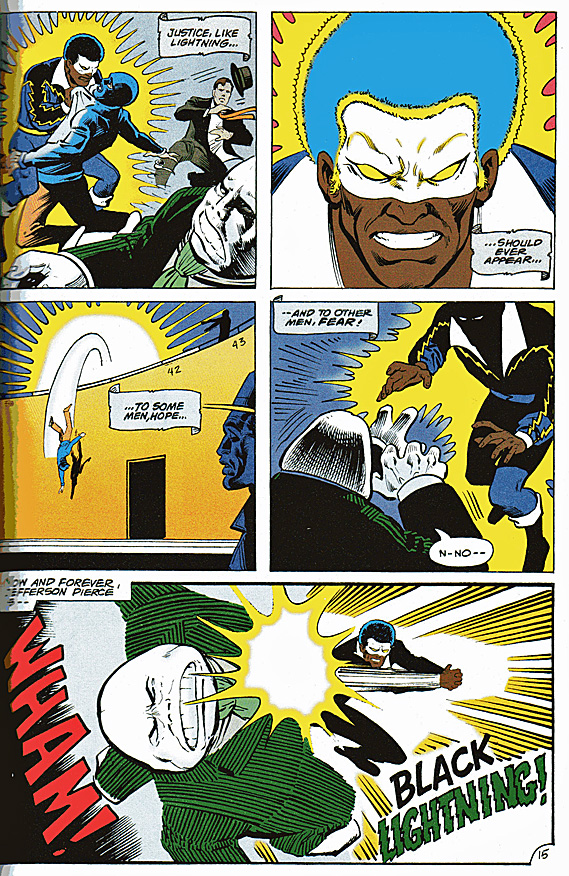 The penciling by Von Eeden on Black Lightning is very good, all the more so when you consider that this was his first professional assignment. He was only 17 years old when he began on the series.  Although much of his wonderful signature style and the dynamic, unconventional layouts he would later utilize are not yet on display, you can still see from these issues the great potential and that Von Eeden was just beginning to develop.

On the first two issues Von Eeden is inked by Frank Springer, a talented artist who had been working in comic books since the early 1960s. The collaboration between newcomer Von Eeden and veteran Springer is very effective, resulting in some great artwork.

Beginning on issue #3, though, Vince Colletta assumes the inking chores, and the difference is immediately noticeable. His characteristic feathery line is on display, and in places it threatens to overwhelm Von Eeden’s nascent style.  I certainly would not say that Colletta’s inking on Black Lightning is among the worse work that he’s done.  Some of his work on these issues is actually rather effective.  It is just that, speaking from personal taste, I’d have preferred if Springer could have remained on the series longer.

Much like Von Eeden, Netzer was relatively new to comic books when he penciled the final story in this collection. He was already doing good work around this time, although his style was still developing.  Colletta’s inking unfortunately does Netzer few favors on this story, although there are some nice layouts on display. 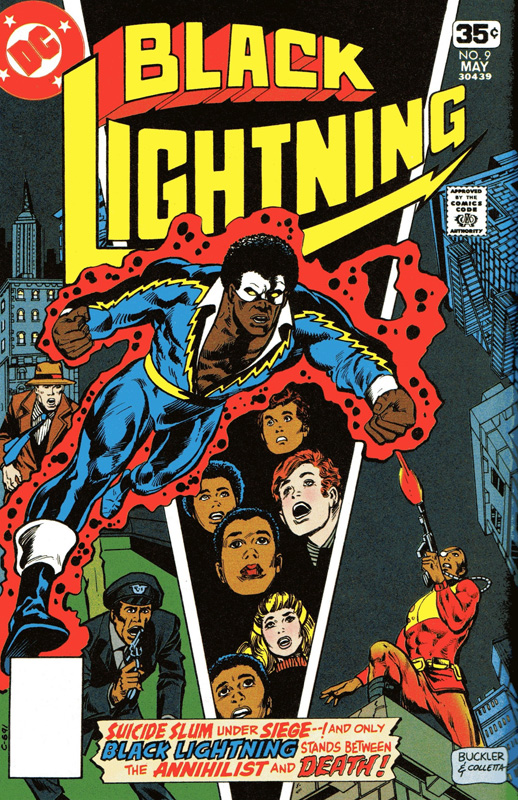 Topping it all off, so to speak, is Rich Buckler. The Bronze Age legend penciled all but two of the covers for Black Lightning, creating some very dynamic pieces.

Definitely pick up a copy of the first Black Lightning collection. It’s a really good read.  And hopefully it does well enough that it prompts DC to release further trade paperbacks.  The excellent 1995 series that Isabella did with artist Eddy Newell is also long overdue for reprinting.