There has been certain skepticism regarding my cat Squeaky’s presidential campaign, with some wondering if a feline can actually even run for President. Well, let me assure you, Squeaky is hardly the first non-human to seek election to the highest office in the land.  Let us cast our gaze back four decades to the year 1976, when that foul-mouthed fowl Howard the Duck ran for President.

Marvel Comics in the mid-1970s was a madhouse, and the lunatics were running the asylum. The company was in chaos, with little editorial oversight, deadlines being missed left & right, and sales on numerous books hovering at precipitously low levels.  On the one hand, this meant that for a time Marvel was teetering on the brink of collapse; on the other, this chaos enabled creators to experiment, to try all sorts of crazy ideas.  Howard the Duck was definitely one of those far-out concepts.  For a time the character was a tremendous success.

Howard the Duck was created by writer Steve Gerber and artist Val Mayerik. In many ways Howard was Gerber’s baby (no pun intended).  Gerber possessed an extremely offbeat and farcical sense of humor.  He utilized the character of Howard, an anthropomorphic duck from another dimension stranded on Earth, to brutally skewer a variety of topics, among them politics, religion and popular culture.  So it was natural enough that Gerber would utilize Howard to mock the 1976 presidential race.  It’s the sort of storyline that even a few years later he simply could not have gotten away with at Marvel.

The main narrative of Howard’s quest for the Oval Office took place in issue #s 7-9 of his monthly title and in the oversized Marvel Treasury Edition #12. Artwork on the Howard the Duck series was by the team of Gene Colan & Steve Leialoha, while the Treasury was illustrated by Sal Buscema & Klaus Janson.

In issue #7, Howard and his human companion, the lovely redheaded Beverly Switzler, are hitchhiking through rural Pennsylvania. After their run-ins with the loony Reverend Joon Moon Yuc and the Incredible Cookie Creature, the pair catch a ride with country singer Dreyfus Gulch.  The rhinestone cowboy is scheduled to sing the Star Spangled Banner at the national convention for the All-Night Party at Madison Square Garden.  Arriving in NYC, Gulch arranges jobs for Howard and Beverly at the convention.  Howard work security, which mostly entails breaking up fights between delegates, while Beverly is a Hospitality Girl, which mostly entails her getting pinched in the ass by those same delegates.  (As far as I know, Bill Clinton was not on the premises.)

Howard ends up foiling a plot to blow up the convention. The delegates, impressed by both his bravery and his extremely blunt honesty, decide to make him the All-Night Party’s presidential candidate.  This immediately puts a target on Howard’s feathered backside. 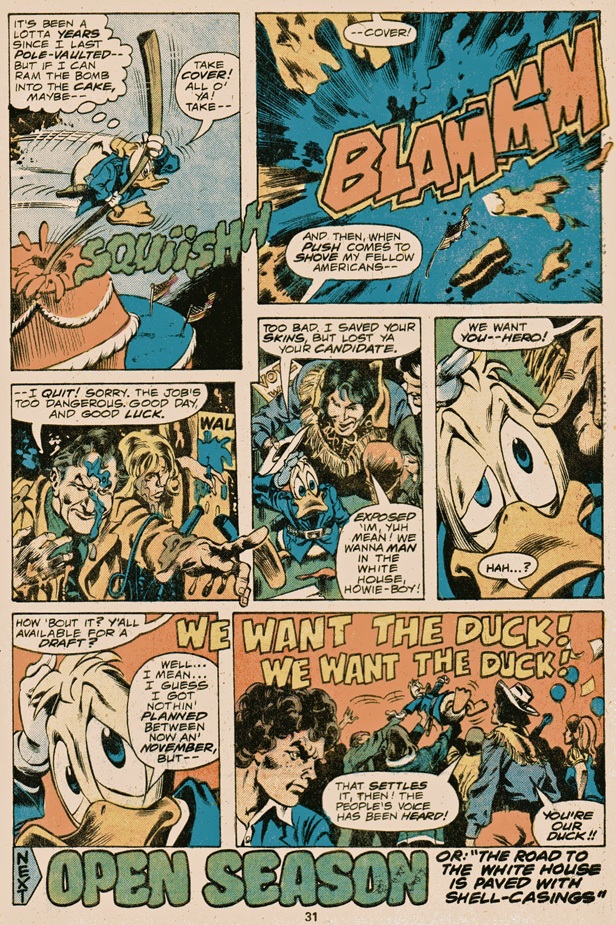 In the pages of Marvel Treasury Edition #7, the first assassination attempt on Howard is made by a quintet of lame wannabe super-villains led by Dr. Angst, Master of Mundane Mysticism, who convinces his fellow losers that fame & fortune awaits them once they kill Howard.

Meanwhile, the still-broke Howard and Beverly are in Greenwich Village searching for a place to crash. Mistaking Doctor Strange’s sanctum sanctorum for the home of Beverly’s old high school friends, the pair instead comes face-to-face with the Defenders.  At this point the legion of losers attacks.  Strange is knocked out by a mystic barrage of baseballs and the unconscious mage temporarily transfers his powers to Howard.

Yes, that’s right. Only one day after receiving the All-Night Party’s nomination, our plumed politician assumes the mantle of Sorcerer Supreme.  If that’s not Commander in Chief material, I don’t know what is.  True, Howard’s turn as a veritable Ducktor Strange, Mallard of the Mystic Arts is short-lived, but he acquits himself well, playing a key role in helping the Defenders to defeat the despicable dimwits who have attacked them.

Also in the pages of the Treasury is an interview with Howard conducted by Steve Gerber himself. Queried about his qualifications and political experience, Howard articulates his reasons for running…

“I never kept one job more than three an’ a half weeks. Which is another advantage of the presidency. They can only fire ya for high crimes an’ misdemeanors. That stuff, I don’t pull. I just mouth off a lot.”

Perhaps you may be thinking to yourself that this is a terrible attitude for a Presidential candidate to have. But just look at it this way… ask any old human why they want to be elected to the White House, and they’ll give you some song & dance about “serving the public” and “patriotic duty” and “making America great again.”  But, truthfully, that’s all a load of horse pucky.  What they are really after is power and adoration and wealth.

In contrast, Howard comes right out and admits he wants to be President because he’s looking to (appropriately enough) feather his nest. How often do you come across a politician with that kind of honesty?

Moving on to Howard the Duck #8, having defeated their attackers, Howard and Beverly depart from Doctor Strange’s house. Within mere seconds they are attacked by a succession of would-be assassins hoping to earn the $10 million bounty that’s been placed on the duck’s head.  Fortunately Dreyfus Gulch zooms to the rescue in his armored limo.

Howard and Beverly are ferried to the offices of G.Q. Studley Associates, whose image consultants want to make Howard into the perfect pre-packaged candidate. Howard, of course, violently rebels at this.  Hiring Mad Genius Associates to manage his campaign, Howard embarks on a series of nation-wide appearances where he bluntly dishes out the unvarnished truth.  The misanthropic duck feels perfectly free to do so because he really doesn’t care if he wins or not, and he’s totally thrilled to finally have a soapbox from which to mouth off and tell everyone how stupid they are.

You might say that Howard the Duck as a presidential candidate possesses the ideology of Bernie Sanders and the personality of Donald Trump. As one person in this issue comments, “My god, he’s telling the truth!  He’ll be dead in a week!”

Much to his surprise, Howard makes significant gains in the polls, and as Election Day approaches it actually appears that he might have a shot at winning. This all comes crashing down when a doctored photo that appears to show Howard and Beverly having a bath together is published by the Daily Bugle.  Yep, there’s nothing like the whiff of extramarital hanky-panky to send a promising political career into a tailspin.

As issue #9 opens the election is over and Howard has lost.  Truthfully he really doesn’t care, but Beverly is horrified at having been humiliated, “branded nation-wide as a shameless hussy.”  Dreyfus Gulch taps his CIA contacts, and they discover the forged photo originated in Canada.  Beverly insists to Howard that they head north to clear their names, explaining “My meticulously fabricated rep is at stake!”

Howard and Beverly journey to Canada, joining forces with Sgt. Preston Dudley of the Royal Canadian Mounted Police. Dudley leads them to the most likely suspect, “the infamous Pierre Dentifris, Canada’s only super-patriot!”  Dentifris has a burning hatred of America, regarding it as an arrogant bully that is constantly encroaching on Canada.  The attempts on Howard’s life and the forged photo were parts of an insanely convoluted (and just plain insane) plot to destroy America.  Further casting doubt on his sanity, Dentifris dons a suit of armor shaped like a giant beaver and challenges Howard to a fight to the death on a tightrope strung across Niagara Falls.  Howard, of course, perseveres, although the entire experience leaves him completely opposed to ever again entering the political arena.

Howard the Duck, as well as Steve Gerber’s other works, are something of an acquired taste for me. When I was younger I didn’t really appreciate his writing.  Quite a bit of his material went over my head.  As I got older, and my horizons broadened, Gerber was one of those creators who I grew to appreciate.  Looking at his work now, it’s apparent that Gerber was not the type to write down to his audience.  He certainly enjoyed pushing the boundaries.  Gerber was also very on-the-nose with his withering satire.

In regards to the blurb on the cover to issue #9, “When Bites the Beaver,” I’m curious if Gerber was sneaking in a crude sexual innuendo. Then again, sometimes a beaver is just a beaver.  After all, a few months after this storyline Gerber introduced the villainous Dr. Bong, whose head was a giant bell.  Despite much speculation over the years, Gerber always insisted that, no, the name Dr. Bong was not a drug reference. 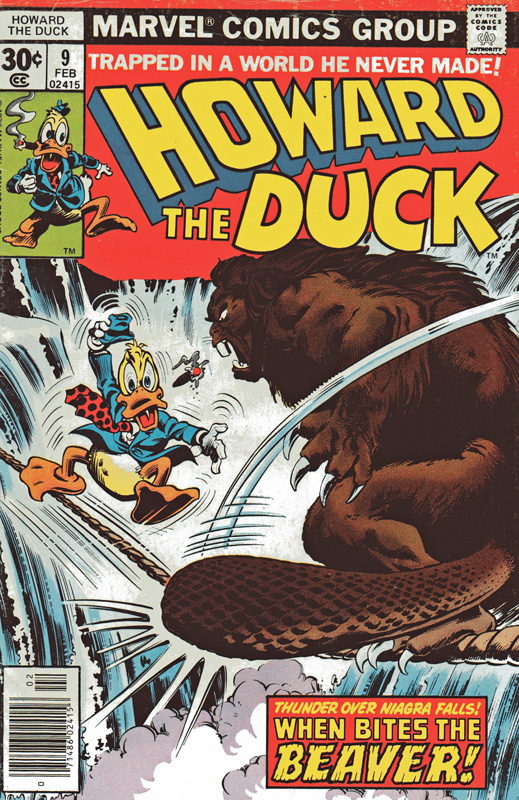 These issues have some really nice artwork. Gene Colan’s unconventional pencils are a nice fit for this series.  Colan specialized in rendering the genres of horror and mystery.  As can be seen by his work on Howard the Duck, he was a versatile artist who was also adept at humor.

Steve Leialoha is a great artist in his own right. He had only been working professionally for about a year when he inked these issues.  As has often been observed, it could be a difficult task to ink Colan’s pencils as he utilized very subtle shading.  Leialoha certainly acquits himself very well.  He possesses a rather abstract, flowing quality to his work, and his inking gives Colan’s pencils a slightly more cartoony quality that suits the tone of these stories.

I asked Leialoha on his Facebook page if he had any thoughts to share concerning his collaboration with Colan, and he was kind enough to respond…

“I like to think I took to inking Gene’s pencils like a duck to water! But, seriously, out of all the pencilers I’ve had the pleasure to work with he was my favorite.  Beautiful stuff!  Doing a little math: I figure I’d inked about 250 pages up at Marvel before Howard the Duck # 7 rolled around with about 70 of them over Gene’s pencils, so I was ready for it!  I look back at it now and see things I would do differently but I’m grateful for the opportunity, all those years ago.”

I’ve previously written about my great fondness for Sal Buscema’s art. He does a very nice job penciling the oversized Treasury.  It’s interesting to see him render the more oddball, cartoony elements of the story, such as Howard himself.

Klaus Janson, even this early in his career, was doing great work. As he has a distinctively gritty style, it’s noteworthy that he’s working on a humorous story like this one.  He and Buscema do make a good art team.

These issues are among the material contained within the Howard the Duck: The Complete Collection Volume 1 trade paperback. I highly recommend picking it up.  Trust me: in this insane election year, we can use all the humor that we can find!

10 thoughts on “Howard the Duck for President”