As a proud and loyal citizen of America, I have spent the last several months aghast at the train wreck that is the campaign for the 2016 election for President of the United States. It has been both embarrassing and more than a bit terrifying watching a succession of fools and crooks attempting to out-pander each other in pursuit of the office of the Presidency.  The possibility that one of these clowns might very well be elected to the White House is genuinely unsettling.

Therefore, I am proud to present an alternative to these opportunistic fear-mongers, a candidate who possesses strength, wisdom, courage, humility, and bravery in abundance… my cat, Squeaky Squeakums.

In a year when nearly every candidate on two legs appears to embody the very worst aspects of humanity, let us look to another species entirely, namely Felis catus, the domestic cat.  Squeaky Squeakums is a wonderful representative of this proud and sage breed.  Yes, she sleeps for an average of 15 hours a day, but during her time awake she is a coiled spring, ready to leap upon intruding mice.  So, too, will she pounce at the first sign of trouble to this great nation, to threats both foreign and domestic.  If elected, she vows to serve all species, be they human, cat, or other animals. Yes, including dogs.

Squeaky is no pampered house cat. Born in Salem, MA, young Squeaky was sadly abandoned by her first human on a trip to New York City.  She spent several years living in an overcrowded apartment in the Bronx, competing with seven other cats, two dogs, and a variety of lizards and birds for space & food.  Seven years ago my girlfriend Michele and I rescued Squeaky and brought her into our home, where we have showered her with love & affection.  But she has not forgotten her humble beginnings.  She possesses a great deal of empathy & understanding for all Americans who struggle to make ends meet.

Squeaky also required extensive veterinary care when we first took her in. That experience has convinced her of the crucial roles that health insurance and affordable medical services must play in our society.

But do not let Squeaky’s compassionate side fool you. She also possesses nerves of steel and a fierce determination.  She will stare down any opponents who seek to take advantage of her good nature.

There have been some questions raised as to Squeaky’s eligibility to run for President. Let me assure you that these are unfounded.  Certain people have asked if she is at least 35 years old, as specified by the Constitution.  Squeaky is 13 cat years old, which as per the experts at Purina is 68 in human years, definitely making her qualified.  She is also most certainly a natural born citizen, and if requested we will release her long form birth certificate for review.

Perhaps you are asking yourself “How could a cat possible gain the support necessary to be elected President?” I can understand your skepticism.  However, Squeaky has already gained a large and enthusiastic group of supporters, Americans male and female who span all ages, races, religions and cultural backgrounds.  All of her campaign appearances have been attended by large crowds of voters who are eager to hear her message.  In fact, here is a photo of Squeaky being greeted by her numerous supporters at her last campaign rally…

If you are dissatisfied with the direction this country has taken, and if you believe that this nation deserves better leadership than it has had in many decades, then pledge your support for Squeaky Squeakums. You can find out more about Squeaky and her message for America on her official Facebook page, Squeaky Squeakums for U.S. President.

Vote for pussy – We’ll all be happy.

This blog post has been brought to you by the Squeaky Squeakums 2016 Super PAC (Pet and Animal Committee).

Valentine’s Day is here, which makes this a good time for me to look at the three most recent issues of Savage Dragon by Erik Larsen from Image Comics, as Malcolm Dragon marries his high school sweetheart Maxine Jung Lai. 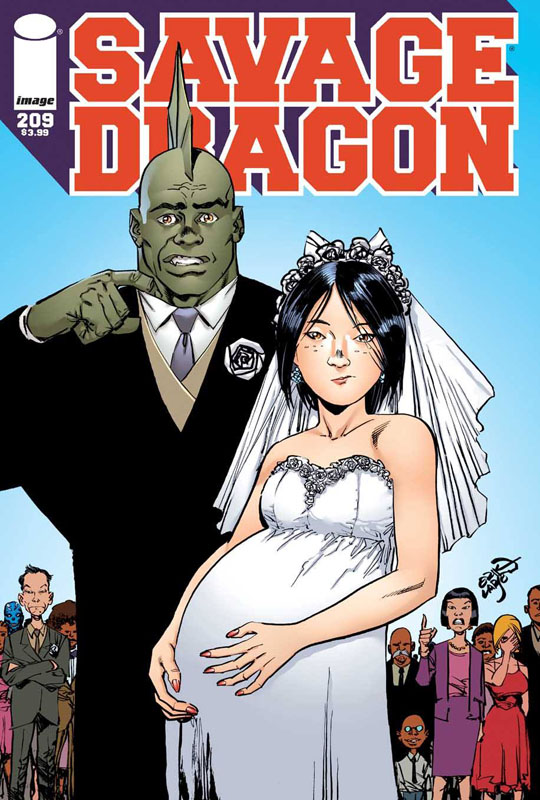 As you can see from the cover to Savage Dragon #209, Maxine is very pregnant. Malcolm did use protection, but he soon discovered that his super-strength extended to his, um, reproductive processes.  Those condoms didn’t stand a chance!  And now I’m reminded of that old essay “Man of Steel, Woman of Kleenex” by science fiction novelist Larry Niven.  Fortunately Malcolm and Maxine had already been thinking about getting hitched, but the pregnancy did result in those plans getting pushed forward ever so slightly!

Of course Maxine still has to worry about a super-powered fetus kicking its way out of her womb, something that occurred nearly two decades earlier with Malcolm’s own mother Rapture. Indeed, as we see in these three issues, this turns out to be a very real, fatal concern for Malcolm’s ex-girlfriend Tierra.  I remember commenting several months ago that the sexual shenanigans between Malcolm, Maxine, Tierra and Angel were like something out of a cheesy porno flick.  However, as we see here, Larsen is continuing to follow up on the very serious consequences of this act of reckless teenage sexuality.

Larsen scripts Maxine as an irreverent smart-ass. She’s very well suited to be with Malcolm, whose life is just plain crazy.  The banter between the two of them is wonderful.  Larsen gives them good chemistry.  Malcolm and Maxine make a great couple, and I look forward to seeing how Larsen continues to develop their relationship. 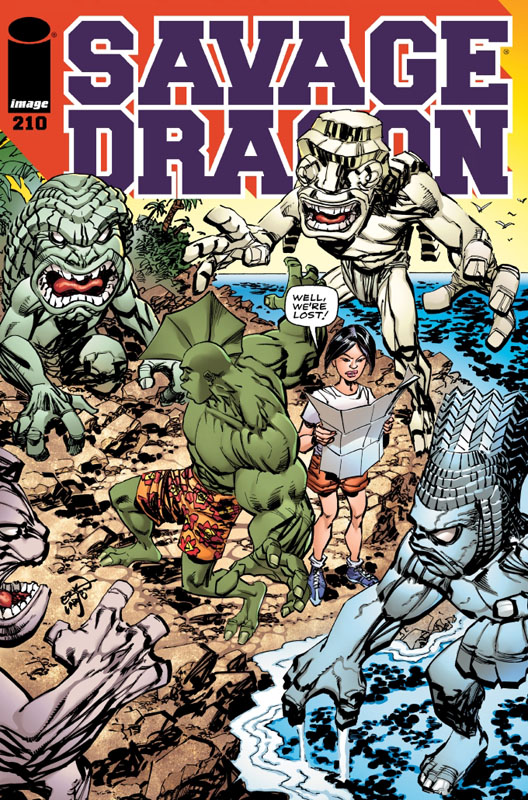 In the next issue Malcolm and Maxine head off for their honeymoon, only to find themselves in yet another bizarre misadventure. They run into a very old foe of Malcolm’s father, as Larsen dusts off a baddie from the very first year of his run on Savage Dragon.

I love the cover for issue #210. There are so few comic book covers like this anymore.  That style of cover artwork unfortunately became unfashionable in the late 1990s, replaced by pin-up or poster types of images.  Yeah, those can be pretty to look at, but they very seldom tell you anything about the stories inside.  They don’t grab you attention and make you want to pick up the comic book to find out what the story is behind it.  Fortunately in a number of respects Larsen remains an unapologetic traditionalist, and Savage Dragon has often featured cover artwork that jumps out at you.

As I’ve observed before, Larsen has a huge cast of characters, and the back-ups are a great way to give some of them the spotlight.  I hope there will be more in the future. I’ve heard that series editor Gavin Higginbotham is eager to write some new ones.  And, hey, speaking for myself, I’d love to pitch one!  How about something looking at Horridus as a single mom / crime-fighter trying to make ends meet after the death of her husband Rex Dexter?  Ever since seeing Horridus in mourning at Rex’s grave in issue #208 I’ve been wondering what happens to her and her daughter.

In issue #211, now that Malcolm is out of high school and married, it’s time for him to get a full-time job. He follows in his father’s footsteps, joining the Chicago police department.  Much of the material from #211 originally appeared in the Savage Dragon: Legacy special that came out as part of last year’s Free Comic Book Day.  Larsen adds several new pages and re-scripts some dialogue to reflect various events and developments that he either changed his mind about in the succeeding months or wanted to keep secret between then and now.

Issue #211 has a “1st Issue In A Bold New Direction” blurb, just as issue #193 did two years previously. It’s nice that Larsen devises jumping-on points from time to time.  Since Savage Dragon has been running for 23 years, it’s good to have periodic issues that bring newer readers up to speed, and that refresh the memories of long-time fans such as myself.

Larsen’s scripting in Savage Dragon often has something of an exposition-heavy quality to it. While at times this means his dialogue does not sound quite natural, it nevertheless ensures that important events are recapped for readers on a regular basis.  That’s certainly an asset in #211, as Malcolm explains his somewhat convoluted origins.

Notice something else? Despite these two “Bold New Direction” issues, both times Larsen resisted the urge to re-start the numbering on Savage Dragon with a brand new issue #1.  Honestly, I am sooooo sick of Marvel and DC doing that.  Perhaps that might result in a temporary bump in sales.  But at the same time, a new first issue can actually present a jumping-off point for readers whose interest in a series is wavering.  That’s certainly been true for me on a few occasions.

Whatever any case, I’ve barely read anything the Big Two have published in the last several years. And as I’ve stated a few times on this blog, Savage Dragon is my favorite ongoing comic book series.

Right before Savage Dragon #211 came out I recently took the opportunity to re-read issues #193 to 210 in one sitting. Larsen did very good work during this two year period, writing and drawing some entertaining, weird, humorous stories.  I’m looking forward to seeing how he now proceeds onward from #211.