The four issue miniseries The Rook by Steven Grant and Paul Gulacy published by Dark Horse recently concluded. I previously reviewed the first issue, so now I’m going to take a brief look at the remainder of the story.

Having been gifted the Time Castle by his older self, Restin Dane aka the Rook travels back from 2015 to the late 19th Century to seek out his great-great-grandfather Adam, the man who first discovered the secrets of time travel. Adam is, in fact, the unnamed narrator from the H.G. Wells novel The Time Machine.  In a paradoxical twist, Restin with his knowledge of 21th Century science plays a key role in his ancestor’s development of the first time machine.

Having related his experiences to his friend Wells (who of course goes on to describe them in his book), Adam returns to the far-distant future to lead the Eloi against the Morlocks. Resin follows after him in the Time Castle, only to discover that Adam’s mission has gone decidedly pear-shaped.  Adam also has, from his perspective at least, his first run-in with the sinister Quarb.

Grant sets up an interesting relationship between Restin and Quarb. The later is an incredibly long-lived being, having existed for countless thousands of years.  Restin, via time travel, has (or will have) encountered and fought against Quarb repeatedly throughout the millennia, but always in a non-linear manner.  It was Quarb who organized the “Rook Revenge Squad” (as I like to call them), the assemblage of Restin’s old enemies, in the first issue.  That was but one of the innumerable schemes that the immortal plotter has crafted over the eons.

I get the impression that Grant must have some flowcharts to keep track of the timelines of the various different characters, and the points at which they meet. I read issue #4 as soon as it came out last week.  Today I re-read the entire miniseries in one sitting.  A number of the connections and strands that Grant sets up in it suddenly became much clearer to me.

It’s interesting to see how events unfold. For now Grant leaves it up in the air if various occurrences are the result of time loops and predestination paradoxes, or if history actually is being rewritten by Restin’s actions.  As the Rook’s robot aide Man-Rs astutely observes in Dark Horse Presents #14, if you do alter the past then all of your memories of it, and all of the accounts in the history books, are instantly going to change, so you are never going to notice the difference.

Grant is definitely not doing the decompressed thing here. These four issues, plus the DHP prologue, are packed with plot and dialogue.  Considering that nowadays most 22 page “pamphlets” can be read in less than ten minutes, it’s a real pleasure to find a comic book that demands the reader’s attention to detail.

Once again the art by Paul Gulacy is amazing. As I’ve written on a few occasions, I am a huge fan of Gulacy’s work.  I really think he is such an underrated talent.  His storytelling and action sequences are among the very best in the field of sequential illustration.  Gulacy demonstrates his versatility, effectively depicting both Victorian London and the far distant era of the Eloi and Morlocks.  Jesus Aburtov’s coloring once again looks amazing over Gulacy’s art.

It’s worth mentioning that Grant imbues his stories with a certain amount of humor. Gulacy’s art very ably complements that quality.  His style is definitely hyper-detailed, but he also possesses the ability to render comedic scenes through exaggerated figures and facial expressions.  The encounter between Quarb and the Morlocks in issue #3 literally had me laughing out loud.

Grant and Gulacy are currently working on a second miniseries. I’m definitely looking forward to it.  The Rook was a great read, and I’m anticipating the further adventures of Restin Dane.

Dark Horse will be releasing a trade paperback of The Rook on May 25th. If you missed this miniseries then I highly recommend picking up the collected edition when it comes out.

I was both shocked and saddened by the news that musician David Bowie had died on January 10th at the age of 69 from cancer. While I would not say that I was a huge fan of his, I definitely enjoyed listening to his music.

“Visionary” is a word that gets thrown around with great frequency; “unique” is another. But in the case of David Bowie those two descriptions very much applied.  He wrote and performed numerous amazing songs over a career that spanned nearly half a century.  Bowie also devised so many incredible, bizarre, innovative looks for himself throughout the years.  He was undoubtedly one of a kind.

My girlfriend Michele is a longtime fan of Bowie. She created a very nice tribute to him on her own blog.

For me, on Monday my thoughts kept returning to Bowie’s awesome 1995 song “Hallo Spaceboy,” the lyrics and tune playing in my head. Co-written by fellow music pioneer Brian Eno, the song features a collaboration between Bowie and the duo of Neil Tenant & Chris Lowe, aka the Pet Shop Boys.  I cannot recall if I’ve mentioned it here before, but the Pet Shop Boys are one of my all time favorite music groups.  So it was a genuine thrill to hear them performing with Bowie, a bona fide rock god.

Of course, I would be remiss if I neglected to mention another collaboration of Bowie’s, namely “Under Pressure” which he recorded with Queen in 1981.  Bowie and Freddie Mercury singing together was magnificent.

A good example of the massive cultural impact that David Bowie had can be seen in the Doctor Who universe, of all places. Last year in the comic book series The Eleventh Doctor, writers Al Ewing & Rob Williams and artist Simon Fraser introduced a character who was very much an homage to Bowie.

The Doctor takes his companion Alice back in time to London 1962 to see the debut performance of John Jones, a legendary rock star. Much to Alice’s dismay, Jones turns out to have zero stage presence and even less charisma.  However the drab wannabe-musician ends up accidentally joining the Doctor and Alice in the TARDIS.  As the year-long story arc progresses, Jones is majorly influenced by all of the strange, otherworldly places he visits with the Doctor and Alice.  By the time he returns back to 1962, Jones is ready to embark on a revolutionary music career. 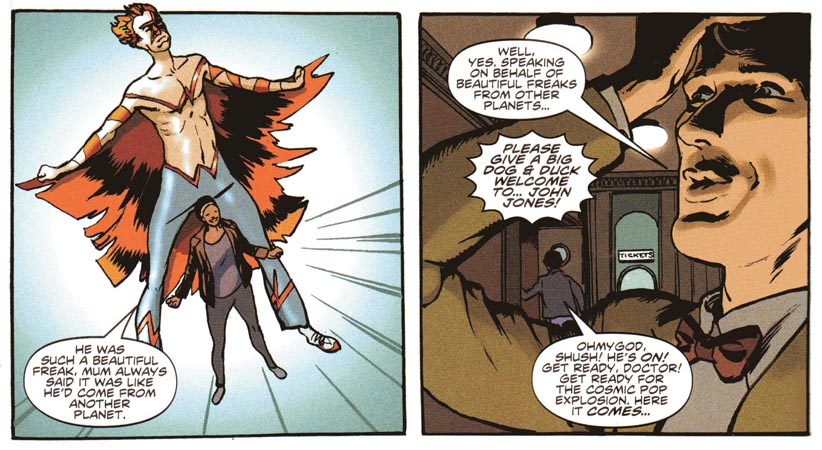 Of course, in real life David Bowie was even cooler than that. He didn’t need to travel through all of time & space in order to come up with his amazing music and cutting-edge looks.

Despite his illness, Bowie was active right up until the very end. Blackstar, his twenty-fifth and final studio album, was released on January 8th, his birthday, a mere two days before his death.

Bowie’s passing has gotten me thinking. At 69 years he wasn’t exactly young, but neither was he very old.  It’s a sobering reminder that you never know how much time you will actually have.

For a few months I’ve already been considering devoting my energies towards writing fiction.  I dabbled in it when I was in my early 20s.  Over the last three years I’ve been working out an idea for a novel in my head.  Maybe now is the time to finally commit.  After all, I’m going to be 40 years old in June.  It just doesn’t seem like a good idea to keep procrastinating at this point.  I’ll still keep this blog going, perhaps switching between it and my fiction on alternate weekends.  I just don’t want to put off my dream until it’s too late.

In any case, my thanks go out to David Bowie for all of the wonderful music he created. He will definitely be missed.