As the release of The Force Awakens approaches, I’ve been reviewing a few of my favorite entries in the Star Wars expanded universe.  Today I’m looking at River of Chaos, a four issue miniseries published by Dark Horse in 1995.  It was written by Louise Simonson and illustrated by June Brigman & Roy Richardson.

Six months after the destruction of the first Death Star, ace Imperial pilot Ranulf Trommer is summoned before the high-ranking Grand Moff Lynch.  There are rumors that Grigor, the Imperial governor of M’Haeli, is engaged in illegal activity.  Lynch assigns Ranulf to be the Governor’s new aide, with orders to report anything suspicious.  Before Ranulf can arrive on M’Haeli, one of Grigor’s informants alerts him to the pilot’s secret mission.  Seeking to dispose of him, Grigor sends Ranulf to infiltrate the Rebel cell on M’Haeli.  The Governor subsequently dispatches Stormtroopers to attack the Rebels, intending for Ranulf to be killed in the crossfire.

Posing as a merchant, Ranulf brings a damaged protocol droid to Mora, an 18 year old human mechanic suspected of Rebel activity.  When she was only an infant, Mora was orphaned, and she was adopted by Ch’no, one of the H’Drachi, the native inhabitants of M’Haeli.  Ch’no has subsequently been ostracized by the rest of his people.  Likewise, because she was raised by a H’Drachi, Mora does not feel any real kinship with the human settlers.  She is not comfortable in either society.

Soon after Ranulf arrives at Mora’s shop, the two are attacked by the Governor’s troops.  Ranulf is wounded, and Mora helps him to escape.  She brings him to several of her Rebel friends, including the visiting Princess Leia, although they are immediately suspicious of Ranulf.  The Rebels discover that Governor Grigor is working with space pirates to run an illegal mining operation on M’Haeli.  Ranulf is convinced that once the Governor is arrested, he will be replaced by someone fair & honest, and that the planet will no longer want to join the Rebellion.

When it becomes apparent that Ranulf is working for the Empire, the Rebel cell understandably panics, fearing that an attack is imminent.  Mora once again feels like an outsider and an outcast as the other Rebels look upon her as a gullible fool who brought a spy into their midst.  She also wonders how she could have so misread Ranulf, who she sensed to be a good person. Ranulf, in turn, also begins to experience doubts. 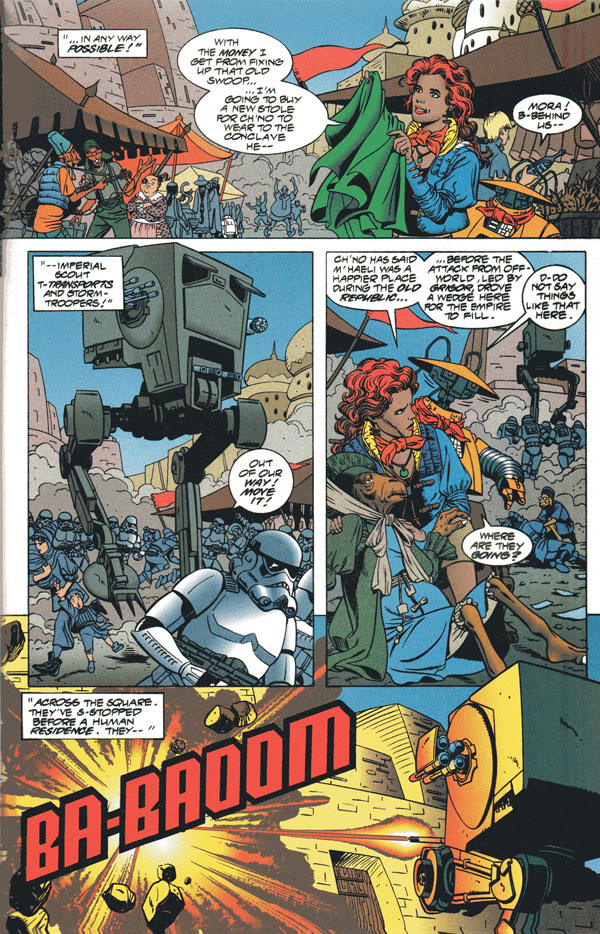 Louise Simonson does good work developing the characters in River of Chaos.  I really like how she wrote Ranulf and Mora, as well as the supporting cast.

One of the things she touches upon is something you occasionally see pondered in fandom, namely just what sort of person would actually work for an organization like the Empire?  Obviously, as in real-world totalitarian regimes, you have those with a superiority complex who enjoy wielding authority and who wish to exercise power over others.  You also have those who see the excesses of the Empire as an unfortunate  necessity in maintaining an ordered society.  You then have those who see in a cold, impersonal bureaucracy the opportunity to exploit the system and become wealthy.  Finally, there are those who are unable or unwilling to think outside the box, content to blindly follow orders and unquestioningly listen to Imperial propaganda.

After he is assigned to his mission of espionage, Ranulf expresses uncertainty to his father, an Imperial Admiral…

Ranulf: We used to serve the Old Republic. And now we serve Grand Moff Lynch’s New Order. Doesn’t it matter who we serve and why?

Admiral Trommer: You were too young to realize the sewer the Old Republic had become. Grand Moff Lynch took control and changed all that.  He is strong, and we will help him keep the peace in any way possible.

Later on M’Haeli, away from his fellow Imperial troops and officers, among Mora and the Rebels, Ranulf gradually begins to see the universe through their eyes.  He starts to perceive that they have legitimate grievances.  Ranulf’s slowly begins to understand that there is little difference between Governor Grigor and Grand Moff Lynch.  He start to realize that Grigor subjugated M’Haeli in order to line his own pockets, but that Lynch is also willing to do exactly the same in order to further the cause of the Empire. 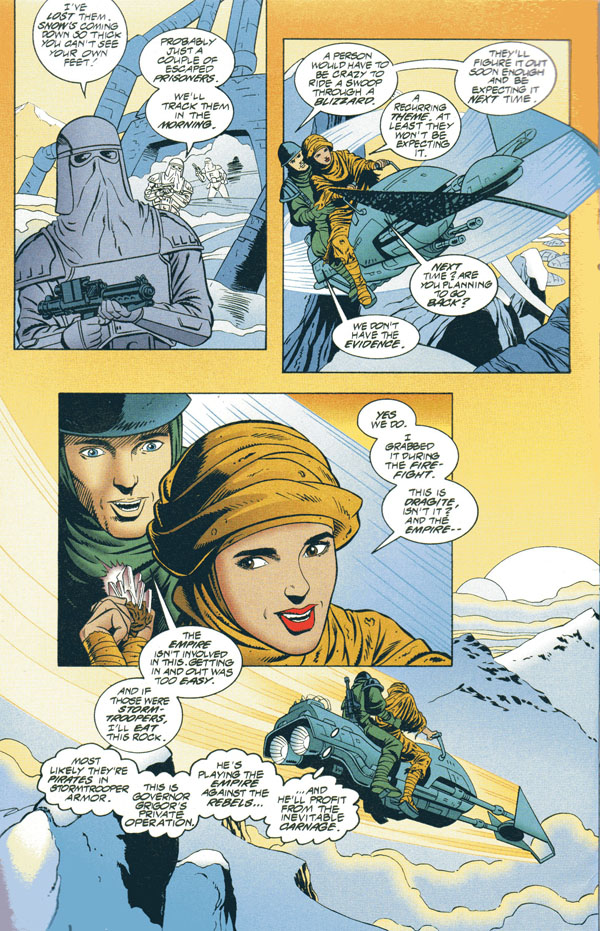 One of the themes that run through Simonson’s work is family.  She explores that here through Mora and Ch’no.  In many ways this human teenager and H’Drachi elder are much closer than most daughters and fathers who are united by blood.  At the same time, Mora realizes that she needs to have more than just Ch’no.  The Rebels become the friends and family Mora never had.  You also get the impression that Ranulf is the first person for whom she has ever developed romantic feelings.

I like that Simonson has Princess Leia appear as a supporting character.  One of my favorite aspects of the EU is that it has enable writers to develop various minor characters from the movies, as well as brand new ones.  By having Leia appear in a minor capacity, it connects River of Chaos to the larger narrative of the movies without overshadowing Mora, Ranulf, Ch’no and the rest of Simonson’s characters.

The artwork by June Brigman & Roy Richardson is really lovely.  I have been a fan of both Simonson and Brigman since the early days of their careers when they co-created Power Pack.  It is always nice to when they have the opportunity to reunite on projects such as this one.

Brigman and Richardson’s work is very clean, with a cute and charming quality to it.  There is a genuine tone of fantasy and wonder to their style and the designs of their characters.  At the same time, they do a very good job rendering the established Star Wars elements such as Speeder Bikes and Stormtroopers.  Brigman & Richardson are definitely underrated, and I wish that we had the opportunity to see their work in comic books much more often.

I think River of Chaos fell somewhat under the radar amidst the rest of the Star Wars releases from Dark Horse, which often featured hyper-detailed and embellished artwork.  That’s a shame, because this was a nicely written miniseries with wonderful artwork.  The creators did a fine job of exploring and developing the Star Wars universe.  It’s well worth searching out.

One thought on “Star Wars reviews: River of Chaos”