I’m behind on my Doctor Who viewing!  Hopefully I’ll catch up soon.  In the meantime, here at last are my thoughts on “The Girl Who Died” written by Jamie Matheison & Steven Moffat and “The Woman Who Lived” written by Catherine Tregenna. 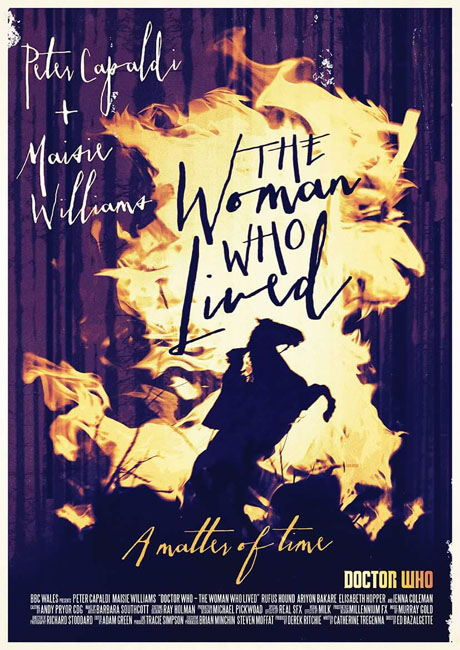 It has often been observed that one of the BBC’s greatest strengths is in filming historical dramas.  This has definitely served as asset to Doctor Who, enabling the show’s creators to craft stories set in Earth’s past that have a feel of authenticity to them.  Certainly that is on display in these two episodes, which take place, respectively, in a Ninth Century Viking Village and in the English countryside of 1651.

Along those lines, the juxtaposition of a familiar historical period with fantastic sci-fi elements can work wonderfully.  I do not necessarily think that either the Mire or Leandro necessarily rank up there with the all time great Doctor Who villains.  But both are quite effective within these period setting, perhaps more so than in a story set in the present day.

2) Who wants to live forever?

A theme that has recurred throughout Doctor Who is that immortality, or even a really really REALLY long life, can be as much a curse as a blessing.  For all the benefits of living for millennia, there is the fact that everyone around you grows old and dies, that over and over you will lose those you care for.  And with all those long years ahead, you are also left wondering exactly how you are supposed to occupy your time.

This is very evident in the character of Ashildr.  The long centuries have embittered her, left her aloof and indifferent to the rest of humanity.  The majority of her memories have faded, and she needs to keep detailed journals to remember her own past.  For all of the wonderful adventures she has experienced, she has also experienced monumental loss, and now feels utterly alone.  It really is left up in the air if the Doctor (Peter Capaldi) was right to save her if it condemned her to this existence.

I was extremely impressed by the performance of actress Maisie Williams, who portrayed Ashildr in these two episodes.  Williams showed such an incredible range and depth for such a young actress (she is only 18 years old).  Ashildr as written by Matheison & Moffat in the first part is very different from the figure seen in Treganna’s second installment.  Williams played Ashildr as a sweet, thoughtful, imaginative girl in part one.  In the next, she effortlessly transitions to the haughty, cynical, haunted, mournful woman that the Doctor now encounters.  Williams and Capaldi had a wonderful chemistry and interaction in these two episodes. 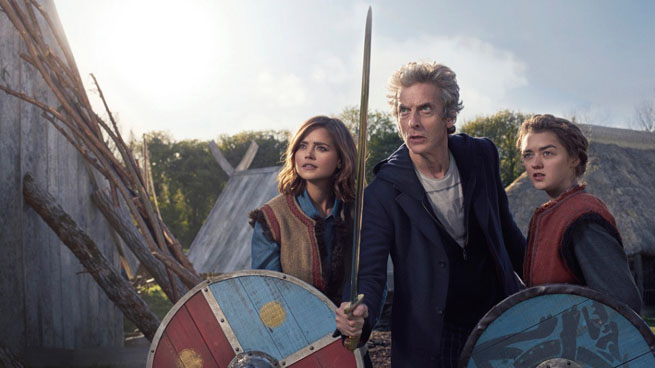 Previously examining the relationship between the Doctor and the Master, I pondered the idea that the two of them began as similar people but then developed in very different directions.  That leads to a question, one akin to the Twelfth Doctor’s consideration.  If they were once so very alike, then is the Doctor actually a good person?

“The Woman Who Lived” offers some insight into this.  We learn that the Doctor is, from experience, well aware of the pitfalls of immortality.  It can engender a dangerous sense of superiority and disdain for others, and create disconnect from the mortal world.  That is why the Doctor will not allow Ashildr to travel with him; he feels that he needs to be around ordinary human beings to be able to continue to appreciate their importance, the precious qualities of mortal lives.

I believe that the quality of “good,” of decency and morality, is not simply something that it exists.  It is not natural to anyone.  Instead it is something that we need to vigilantly maintain each and every day of our lives, in spite of all the offenses and injustices that life throws at us, in opposition to our own defects of character.

This is the difference between the Doctor and the Master.  They possess similar personalities and flaws, but the Doctor endeavors to continually remain aware of his failings and his weaknesses, and to work to overcome them, to be selfless.  That is what makes the Doctor a good man.

5) Hopefully not a Swift end

When the highwayman Sam Swift (Rufus Hound) shows up halfway through “The Woman Who Lived,” he seems like just an arrogant douche.  Later we learn that Swift has been arrested and sentenced to die.  Standing on the gallows with the hangman waiting, Swift proceeds to tell a number of cornball jokes, hoping to keep the spectators amused for as long as possible, to delay his execution for just a little bit.  It’s a surprisingly touching and subtle performance by Hound, showing the frightened, vulnerable side of the character.

This is a great scene that underlines the Doctor’s point that the inevitability of death is what gives life worth meaning.  Ashildr, barring catastrophic injury, will live forever.  Without the fear of dying, she is no longer able to appreciate her life.  In contrast, Swift is desperate to hold back death, to stay alive, if only for a few precious moments. 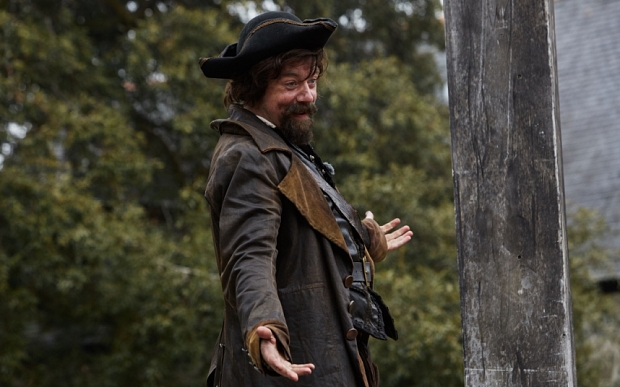 I’m returning here to something that I brought up in my review of “The Witch’s Familiar” where both Moffat and the characters failed to think outside the box.  In that case, it was the Doctor not finding a third alternative to either killing Davros as a child or letting him live his life uninterrupted.  In the comments section, Jim O’Brien described that as such: “in many of the stuff [Moffat] pens, I find that he (or his characters) often have a very clean-cut X, Y, and Z perspective on things.”

There was another occurrence of that here in “The Woman Who Lived.”  Ashildr desperately wants to travel with the Doctor in the TARDIS because she is bored with immortality, with being stranded on a primitive planet with nowhere to go, nothing new to experience.  The Doctor refuses to let Ashildr join her because he perceives the danger to his own behavior that could occur from being around another immortal. He wants to leave her in 1651.

Well, why isn’t there a third choice?  Why can’t the Doctor offer to give Ashildr a one-time lift in the TARDIS to another time or planet where interplanetary space travel exists, so that she can then go off and explore the universe on her own? 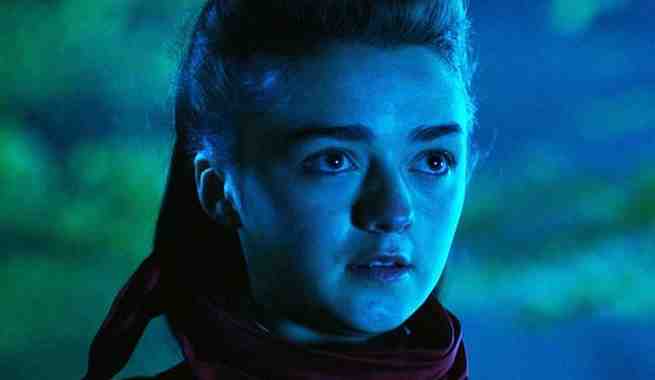 I wonder if electric eels actually work in the manner seen in “The Girl Who Died.”  Could the Doctor really have been able to defeat the Mire that way?

Well, wacky science aside, what I appreciated about the Doctor’s plan is that it once again shows that, rather than shooting or blowing up his adversaries, he really tries to find an intelligent and clever method of outthinking his foes in order to defeat them.  That’s one of my favorite qualities of the Doctor.

8) But you can’t go around wearing copies of bodies!

I don’t think we needed it explained that the Twelfth Doctor subconsciously chose the face of Caecilius from “The Fires of Pompeii” as a reminder to himself that he saves people.  After all, Capaldi is hardly the first actor to guest star and then return to play an ongoing character during the show’s long history.

Along these lines, I’m wondering what we’re going to find out next.  Will it turn out that Lieutenant Andrews from “Carnival of Monsters” was Harry Sullivan’s grandfather?   Or that Bret Vyon from “The Daleks’ Master Plan” was a clone of Brigadier Lethbridge Stewart?  Maybe it will be revealed that immediately after the events of “Inferno” Sir Keith Gold bumped into the malfunctioning TARDIS console and was transported back to the Victorian Era where, stricken with amnesia, he assumed the identity of amazingly alliterative London theater manager Henry Gordon Jago.

Now I’m half-expecting there to be an upcoming Big Finish audio story revealing that the Sixth Doctor took on the likeness of Commander Maxil from “Arc of Infinity” to remind himself to, um, dress to stand out and to shoot first & ask questions later?  Well, that would explain Old Sixie’s odd fashion sense and tendency to be trigger-happy!

Okay, all kidding aside, I did enjoy these two episodes.  “The Girl Who Died” was perhaps the weaker of the two, coming out a bit uneven.  “The Woman Who Lived,” on the other hand, was absolutely fantastic, featuring an amazing performance by Maisie Williams and superb writing by Catherine Tregenna.  Of course, Peter Capaldi continues to impress and amaze as the Twelfth Doctor.

3 thoughts on “Doctor Who reviews: The Girl Who Died and The Woman Who Lived”