Here’s my overview of the second two-part storyline of Doctor Who Series Nine, “Under the Lake” and “Before the Flood,” written by Toby Whithouse and directed by Daniel O’Hara.  Once again, if you’re looking for a detailed synopsis, there’s always Wikipedia.  The numbered thoughts format worked well in my last Doctor Who review so I’m going with that again.

1) A fate worse than death

Let’s face it: dying violently & unexpectedly sucks.  But there’s something worse than that, which is dying violently & unexpectedly and then coming back as something that’s neither alive nor dead.  That is a major reason why the zombie sub-genre is frightening; it’s not just the idea that if the zombies catch you that they’re going to kill you, but also that you are then going to be turned into one of them.

That’s pretty close to what happens in Whithouse’s story.  If you get killed, you then come back as a “ghost” with no will of your own, existing only for two purposes: to signal the Fisher King’s people to invade Earth, and to create more ghosts for that same purpose.  We’re never told how much sentience or intelligence, if any, remains of the victims after they die and come back.  But the mere possibility that you will spend the rest of eternity as a mindless, incorporeal wraith is undoubtedly horrifying.

“You robbed those people of their deaths. Made them nothing more than a message in a bottle. You violated something more important than time. You bent the rules of life and death. So I am putting things straight. Here, now, this is where your story ends.”

Capaldi does a superb job conveying both the Doctor’s moral outrage and his grim determination to thwart his adversary.

Back in April 2013 I compared “The Rings of Akhaten” to “Cold War.”  The former was ambitious, a special effects laden episode set on a far-off alien world.  Yet it was also a story that very much underwhelmed me.  The later was contained within the claustrophobic interior of a Soviet submarine, but was effectively written and directed, leaving me much impressed.

That comparison comes to mind again this year.  Series opener “The Magician’s Apprentice” and “The Witch’s Familiar” had the spectacle of the Doctor facing Davros and an army of Daleks on a restored Skaro, but it was a very uneven story.  There were some great scenes, but also moments that were really weak, resulting in a story that was merely good.

In contrast, these two episodes are much more limited in scope.  Part one is set in a shadowy underwater base in the early 22nd Century.  Part two expands the action to a deserted Welsh village in 1980.  The special effects and make-up are rather minimal, limited to the ghosts, the Tivolian undertaker and the Fisher King.  Yet the writing, the acting, and the directing are all absolutely top-notch.  This two part entry is intelligent and suspenseful, both scaring the audience and really making them think.  And speaking of which…

3) Round and round we go

The bootstrap paradox, aka stable time loop, is an intellectually perplexing aspect of time travel, as well an incredibly unnerving one.  The idea of an event existing without a prima causa, but rather as an endless Mobius strip running back & forth though time is definitely the sort of thing that can make your head hurt.

It is also disturbing because it seems to completely nullify the concept of free will.  In a bootstrap paradox, your actions are apparently totally pre-determined.  That is a frightening concept, the idea that no matter what you do, whatever choices you make, they are inevitably going to lead to a single outcome that cannot be altered.

Doctor Who has utilized the bootstrap paradox previously, most notably in “Blink.”  A variation of it appeared as far back as the 1972 serial “Day of the Daleks,” although in that story it’s implied that the Daleks initially altered history, and a failed attempt to undo their changes led to the temporal paradox.

Outside of Doctor Who, the excellent novel The Anubis Gates (1983) by Tim Powers contains one of the most interesting utilizations of the bootstrap paradox.  Also noteworthy is the very unsettling comic book story “Counter-Clockwise” by Bill Elder & John Severin from Weird Fantasy #18 (March/April 1953).  I find myself wondering if that tale was an influence on the Doctor Who novel Vanderdeken’s Children (1998) by Christopher Bulis.

Last season in “Mummy on the Orient Express” Clara (Jenna Coleman) asked the Doctor if he was addicted to traveling through time & space, and to making life & death decisions.  If he is, then it appears Clara herself also now suffers from that ailment.  As “Under the Lake” opens she is chomping at the bit, eager for the TARDIS to land somewhere new & exciting.

Clara also once again, much as she previously did in “Flatline,” finds herself stepping into the role of the Doctor, taking charge and nudging, almost manipulating, the actions of others.  And, whereas previously Clara found herself angry that the Doctor had made her an “accomplice,” here it is almost second nature.  If Clara is a positive influence on the Doctor, making him a better person, well, certainly the Doctor seems to sometimes be a negative one on Clara herself.

And, just as certain people are understandably resentful of the Doctor’s machinations, so too do they not take kindly to Clara’s.  As Cass inquires through Lunn…

“She said to ask you whether traveling with the Doctor has changed you, and why you always have to put other people’s lives at risk.”

I wonder if Clara is embracing the Doctor’s travels and lifestyle so whole-heartedly because she is attempting to fill the void left by Danny’s death.  Perhaps this is going to be an ongoing subplot through the year.  We know now that Coleman is leaving the show soon, so inevitably there is going to have to be some form of closure for Clara’s character.

5) It’s such a fine line between stupid and clever

In his various incarnations the Doctor has always walked a tightrope between a wise, caring guardian and an arrogant, obtuse meddler.  That is especially true of Capaldi’s portrayal of the Twelfth Doctor.  He is an individual concerned with safeguarding the innocent and combating injustice, yet he is frequently cold and dismissive towards those he is supposedly protecting.

The idea that Clara has the Doctor carry around cards with sympathetic expressions for him to read aloud because he is too self-absorbed and alien to see how much he is upsetting people is both brilliant and all too on-the-mark.  On a more serious note, yes, it does seem that the Doctor made only a token effort to save O’Donnell, and he was actually curious to see if she would be the next to die.  He obviously cares a great deal more about Clara since he was seemingly ready to break the laws of time to save her life.  The Doctor can be maddeningly inconsistent… but, then again, so can most of us. 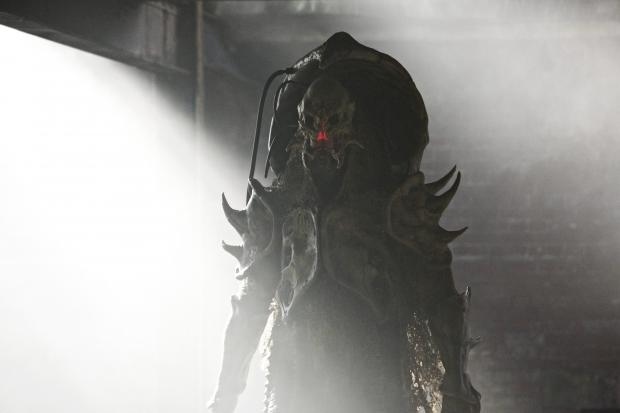 The design of the Fisher King was really good, making him a menacing figure.  The voice was also well done.  The Fisher King was more effective in the scenes set indoors when he was kept somewhat in shadows.  Later, when we see him outside in daylight, he is not nearly as impressive, but still works pretty well.

Having said all that, considering how damn tall the Fisher King was, how exactly did he plan on fitting into that stasis chamber?

Once again the Doctor plays the electric guitar, this time performing Beethoven’s Symphony No. 5 in the pre-credit sequence to “Before the Flood.”  Is it a little self-indulgent to let Capaldi play the guitar two stories in a row?  Possibly.  But I enjoyed it.  As Jim O’Brien astutely observed in the comments section last time…

“While over the top, one of the things I like about Capaldi’s depiction of the character is he can pull off things that might come off as a bit too “twee” or camp if it were say, Matt Smith, or maybe even Tennant doing them. That stern gravitas Capaldi conveys makes the comedic stuff even funnier for me.”

Crap!  I wish I’d been able to articulate my thoughts that well.  Anyway, my point is that much of the time Capaldi is brooding or rude or angry.  So when he then does something completely outrageous like, say, playing the electric guitar, the juxtaposition to his usual intense attitude makes it even more amusing and entertaining.  It’s yet another reason why I am so enjoying Capaldi’s portrayal of the Doctor.

3 thoughts on “Doctor Who reviews: Under the Lake and Before the Flood”