I was originally not planning to go to New York Comic Con this year.  Then about a week before the show my old friend Mitchell Lampert contacted me to let me know he had two extra tickets for Sunday.  Thanks to Mitchell’s very kind and generous gift, my girlfriend Michele and I were able to attend the show.

As usual, I was on a limited budget, although I did manage to raise a little extra money at the last minute.  Even so, seeing all of the amazing creators who had tables in Artists Alley, I did wish that I could have afforded a few more sketches.  Well, there’s always the future.

When we arrived at the Javits Center on Sunday morning, I immediately headed over to Erik Larsen’s table in Artists Alley.  Larsen is the creator of Savage Dragon from Image Comics.  I’ve been following it from the very beginning, over two decades ago, and for the last few years it has been my favorite ongoing series.  Larsen has been a guest at NYCC several times before, but somehow I’ve always missed him.  I did meet him quite a few years ago, but he had a long line then, so I really did not have the opportunity to talk with him.

Fortunately on Sunday, while there was steady traffic at Larsen’s table, it never got very crowded, and so I was able to spend a few minutes talking to him, asking him questions and telling him how much I enjoyed his work.  Larsen is definitely a friendly, cool guy.

I was able to obtain a couple of sketches by Larsen.  He did a quick free sketch of Malcolm Dragon, and then I paid for him to do a detailed Beautiful Dreamer in my theme sketchbook. Larsen is a huge fan of Jack Kirby, so for a while now I’d hoped to have him contribute to the sketchbook.  I’m happy I finally had the opportunity. 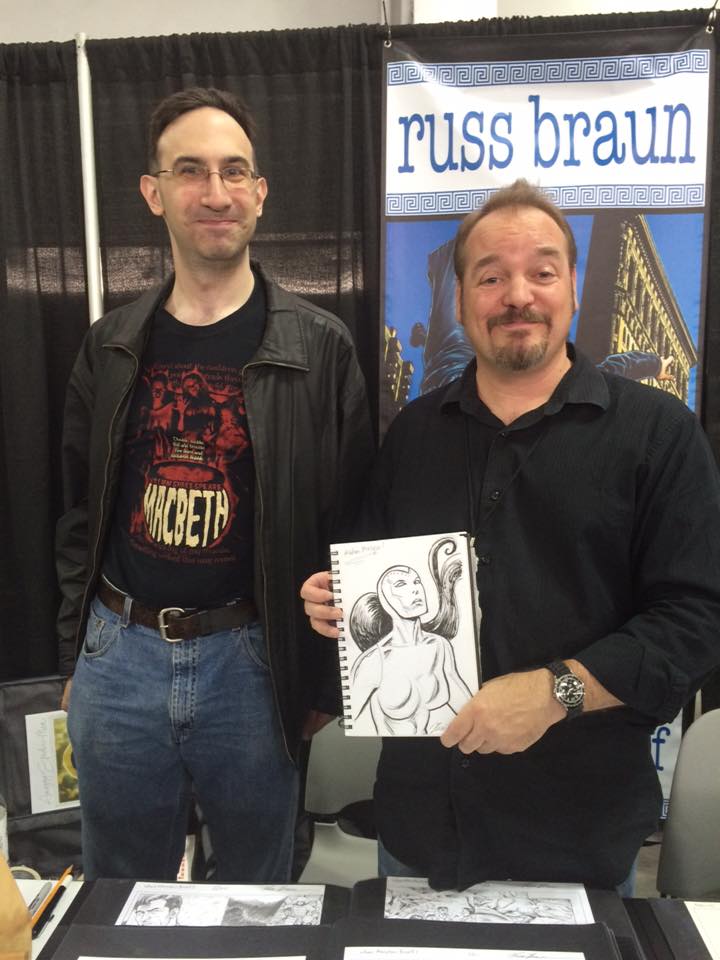 Next I headed over to see Russ Braun, a very talented artist who has worked on such series as Batman: Legends of the Dark Knight, Battlefields, The Boys and Where Monsters Dwell.  I met Russ at a signing at JHU Comic Books a few months ago, where he did a nice drawing of Beautiful Dreamer for me.  Since then we’ve corresponded on Facebook.  Russ is definitely a class act, one of the nicest comic book pros I’ve ever met.  It’s always a pleasure to see the new artwork he’s posting on FB.

I picked up a copy of Russ’ 2015 NYCC Sketchbook, which contains some amazing illustrations.  A lot of these are pieces he’s shared on Facebook in the last few months, and it was nice to see them complied together.  Russ drew a sketch for me in my Avengers Assemble book.  He drew a pretty obscure character named Masque, who you might recall if you were reading the Avengers comics in the mid-1990s.  I will be the first to admit that “The Crossing” storyline was a huge mess.  However, there were certain characters and elements to it that I thought had potential, and Masque was one of those.  Anyway, Russ did a great job sketching the character.

I was pleasantly surprised to meet Christopher Ivy, an artist I know from Facebook.  He is an extremely prolific inker who has been working in comic books since 1988.  Ivy had some original pages for sale.  I was just browsing through them out of curiosity when I came across one of his pages from Sovereign Seven penciled by Dwayne Turner.  As I’ve written before, S7 was an interesting series.  This one leaped out at me because of the beautiful drawing of Lucy the cat by Turner & Ivy.

Yes, as regular readers of this blog will know, I am definitely a huge cat lover.  So I immediately knew that I had to buy this page.  Fortunately it fell within my budget.  Michele thought it was a nice page, as well.

Chris Claremont, the writer of Sovereign Seven, had a table in Artists Alley.  I brought the page over to get his autograph.  Claremont was pleasantly surprised by this, and he appeared genuinely happy to see it.  I always thought the series had a great deal of potential.  Even though it was published by DC Comics, the characters were owned by Claremont.  I told him that I would enjoy seeing him write them again, if not in comic books then perhaps in a prose novel.  I get the feeling that given the opportunity Claremont would like to revisit his creations.

I spent most of the day in Artists Alley, mostly because it looked like the main floor was very crowded.  Around 3:00 Michele and I decided to give it a try.  And, yep, it was completely packed!  It was almost impossible to move in places.  I felt like we were on the NYC subway during rush hour.

After elbowing out way through the crowd and making our way from one end of the floor to another, we finally arrived at the Action Labs booth.  Unfortunately by that time the creators of the Hero Cats series had left for the day.  Well, maybe next year! 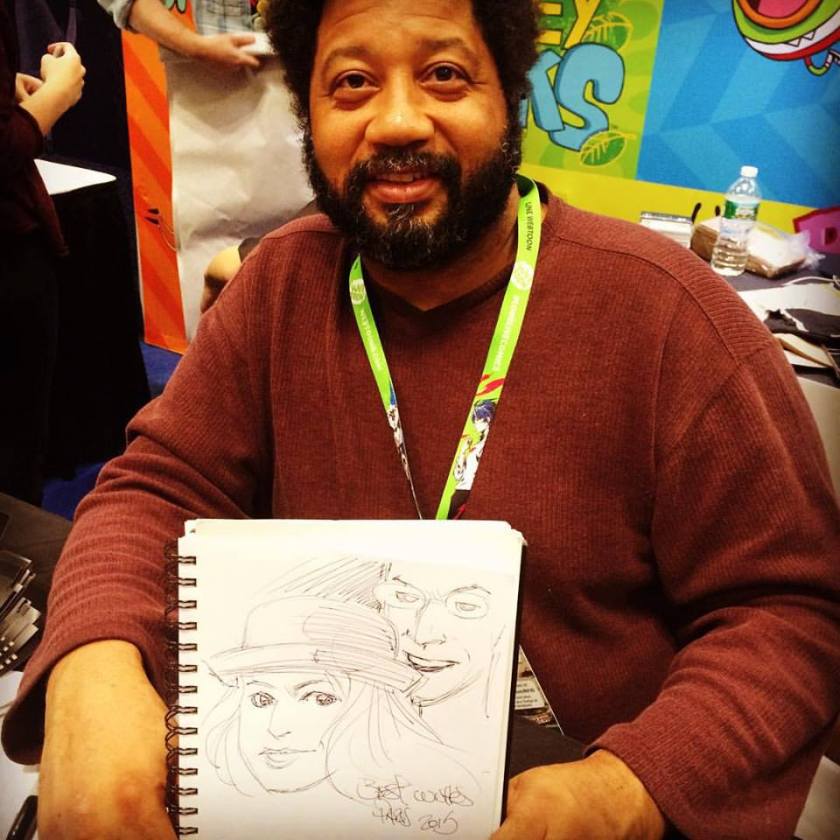 Inching our way back the other was, Michele and I came to the Papercutz booth.  Paris Cullins was there to promote The Zodiac Legacy, the new series he’s working on with writer Stuart Moore.  Cullins asked if I would like a sketch.  He then proceeded to draw Michele and myself!  I think that I look sort of weird, but the drawing of Michele was of course beautiful.  It was a very nice gesture on Cullins’ part.

There were, of course, some really amazing cosplayers at NYCC.  Michele took a whole bunch of pictures.  Here are a few of my favorites…

I really admire many of these cosplayers.  They obviously possess a great deal of talent to be able to create such amazing costumes, as well as the self-confidence to wear them at huge gatherings of fandom.

I’m happy that Michele and I were able to go to New York Comic Con this year.  It was fun.  At the same time, I’m glad that I only went one day.  Any more than that and I would have been completely worn out!