The two-part debut of Doctor Who Series Nine, “The Magician’s Apprentice” and “The Witch’s Familiar” written by Steven Moffat aired a few weeks back.  I’ve been so busy with stuff that I haven’t had an opportunity to comment on them.  But, by popular demand (well, okay, one person requested it… hello, Jim O’Brien!) here are my thoughts.

Looking at my past Doctor Who reviews, they’ve run long.  So this doesn’t go on forever, I’m not recapping the plot.  If you need to have your memory jogged, you can read the synopsis on Wikipedia.

Also, to make things organized, I’m numbering my thoughts.  Other bloggers on WordPress do that, and it can be effective.  So here goes… 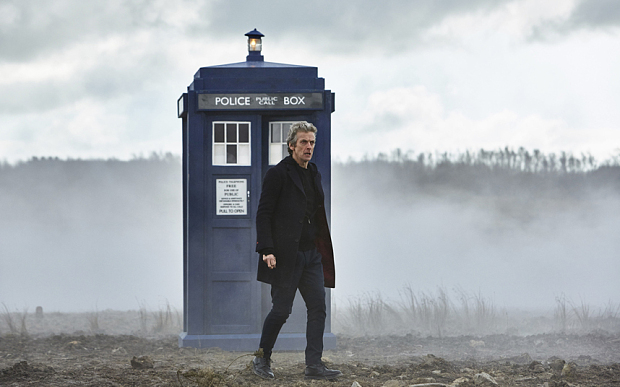 This story offers a variation of the question of “Would you go back in time to kill Hitler as a child?”  The Twelfth Doctor (Peter Capaldi) lands on a planet embroiled in a horrific war.  He sees a young child trapped in a mine field and is ready to save him… until he learns that it is Davros, who will grow up to destroy his own people, the Kaleds, and create the Daleks, the most evil life form in the universe.

The Doctor is appalled.  At first he just departs from ancient Skaro, leaving young Davros still trapped among the mines.  Clara (Jenna Coleman) later realizes the Doctor is full of shame, but it is not specified over what.  Is he ashamed that he did not have the fortitude to kill Davros in the past, before he grew up to become a monster?  Or is the Doctor ashamed that he abandoned an innocent child like that?  Maybe it is both.  Maybe the Doctor is so torn by this that he does not know how to feel.

Of course, later the Doctor does return to Skaro thousands of years ago to rescue young Davros.  The Doctor hopes this act of mercy will remain in his subconscious so that, in the future, when Clara is trapped inside a Dalek shell, the concept of mercy will be something she can access among the Dalek programming to alert the Doctor that it is her.

Thinking over the moral dilemma faced by the Doctor, to kill young Davros or save him, a third alternative eventually occurred to me.  To a certain degree, Davros is very much the product of his upbringing.  He was raised in a fascist society obsessed with genetic purity that was locked in a centuries-long war.  What about removing him from that environment?  Why not take the young Davros aboard the TARDIS and find a peaceful world where he could be adopted by loving parents?  That would give him an opportunity to grow up in a much better place, to hopefully develop in a positive manner.  The Doctor would have changed history, averted the creation of the Daleks, without having to kill a child who had not yet committed any crimes. 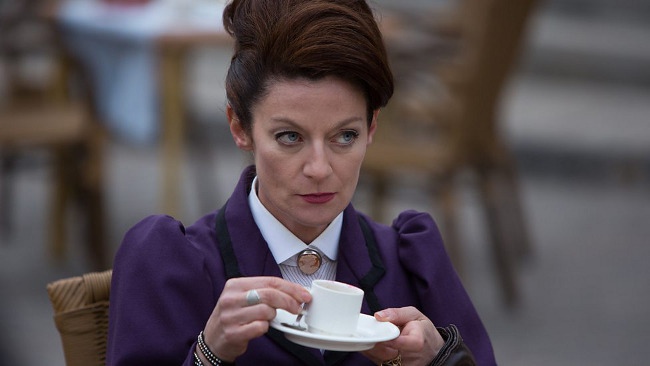 Despite her apparent demise at the end of “Death In Heaven” Missy (Michelle Gomez) is back.  Hey, the Master / Missy has always been brilliant at improbably escaping certain death.  It’s actually a neat twist that we learn Missy stole the method of her escape from the Doctor.  She is so obsessed with the Doctor that she would crib his methods for herself.

It does make a certain sense for Missy to be a recurring adversary for the Twelfth Doctor.  Capaldi was a huge fan of Doctor Who when Jon Pertwee was portraying the Third Doctor.  It’s apparent that Capaldi has incorporated some of the Third Doctor’s mannerisms and personality into his own interpretation of the role.  Back then, the Master was a regular fixture on the series, so it is appropriate for the two of them to once again have an ongoing rivalry.  As long as Missy is not overused (i.e. showing up in every story in a season) there isn’t a problem with her popping up now and again.

In any case, as written by Moffat and played by Gomez, Missy is brilliantly scary.  She is terrifying because you never know what she is going to do next.  When she walks into a room, you don’t know if she is going to start murdering people or do something wacky like singing show tunes.  And if Missy does break out into song, just when you allow yourself to relax, suddenly she’ll whip out a weapon, casually murder some poor innocent, and then resume her recitation of Rodgers & Hammerstein without missing a beat.  That sort of capricious evil means that whenever she’s on the screen the viewer is on edge.  It’s sort of like having to share a room with a venomous snake.

Yet another Dalek story already?  They feel overused at this point.  I wish we could have a season without them showing up.

That might be out of the hands of Moffat, though.  Reportedly the arrangement that the BBC has with Terry Nation’s estate is that Doctor Who is required to have the Daleks appear at least once a year in order to retain the use of them.  That would explain why in the two years that there weren’t any Dalek stories there were brief cameos made by them.

If this is the case, well, having fulfilled the Dalek quota for 2015, I hope that we will not see them again until next year.  Even seeing Skaro restored to its classic appearance, with various old incarnations of the Daleks showing up, left me a bit underwhelmed. 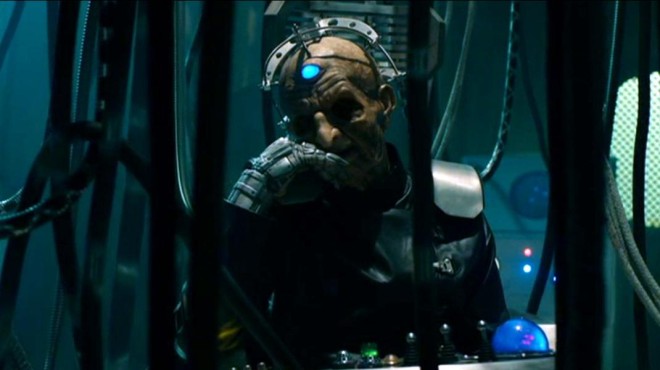 5) Davros is a bastard

Julian Bleach, who played Davros in “The Stolen Earth” / “Journey’s End” reprises the role here.  He has a very good handle on the character.  Davros is at his most effective when the screaming and ranting is kept to a minimum.  As I observed in my review of the Big Finish audio story “Davros,” the most dangerous thing about the character is that he is so incredibly manipulative & charismatic, so brilliant at getting people to underestimate him.  Davros is also very insightful, and he really knows how to get under the Doctor’s skin, point out his weaknesses and failings.

Moffat’s dialogue for the Twelfth Doctor and Davros is very dramatic.  Capaldi and Bleach play these scenes brilliantly.  It was riveting just watching these two adversaries conversing.

One of the problems I had with UNIT when they were regulars on the show in the 1970s was that they were often depicted as incompetent.  That trend has unfortunately repeated itself with Moffat’s use of the organization.  They show up to provide some exposition, a bunch of their personnel get killed, and then the Doctor steps in to save the day.

I’m not sure why you would get Jemma Redgrave to play Kate Stewart, and then write her as an ineffectual idiot.  In “The Magician’s Apprentice,” when every airplane on earth becomes frozen in place, what does Kate, a scientist who heads a multi-national military & intelligence group, do?  Does she consult with her staff and attempt to devise a solution on her own?  No, she calls the Doctor for help.  And when Kate cannot get hold of him, she brings in Clara.  It’s really embarrassing to see a civilian schoolteacher start suggesting possibilities that hadn’t occurred to a single person in UNIT.

Worse yet, when Clara goes to meet Missy, UNIT has no plan for dealing with her.  When Missy begins disintegrating UNIT personnel just to amuse herself, they have no idea how to react, and Kate is left shouting “Don’t shoot her!”  Yeah, that’s great, just stand there and let Missy murder you.  Brilliant plan!

More than ever, I am happy that Redgrave will be playing Kate Stewart in a series of Big Finish audios.  I really hope that when presented in stories that do not feature the Doctor hanging around to save the day, Kate and UNIT will have an opportunity to actually accomplish something.

I’m left wondering what the meaning is of the episode titles.  I am guessing that the Magician is the Doctor and the Witch is Missy.  Clara is probably both the Apprentice and the Familiar.  I wonder if these are just clever titles that Moffat devised, or if they have a significance that will become apparent as the season progresses.

Davros’ henchman, Colony Sarff, is a collective entity made up of hundreds of snakes.  He is wonderfully creepy.  He is just the sort of thing you can imagine coming out of Davros’ twisted mind.  Sarff reminded me a bit of the weird entities devised by Grant Morrison & Richard Case during their classic run on the Doom Patrol comic book.

The “hand mines” on Skaro were also reminiscent of the bizarre quality of that series.  I wonder if Moffat has read Morrison? 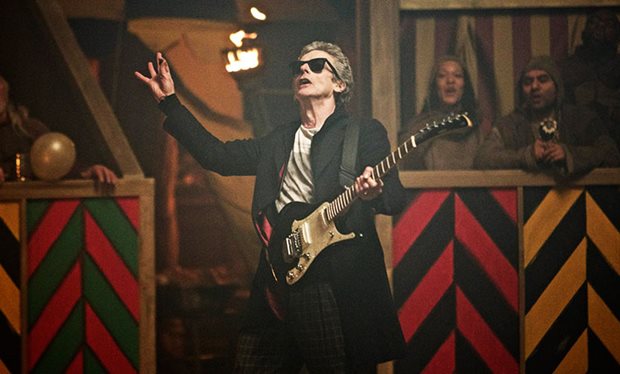 9) The Doctor plays the electric guitar

Seeing the Doctor playing an electric guitar atop a tank in Medieval England was one of my favorite parts of “The Magician’s Apprentice.”  Even more so now that I know that Capaldi himself was actually playing it.  One of the ways that Tom Baker stated he liked to portray the Doctor was to act serious in silly situations and silly in serious situations.  Capaldi also has that sort of quality about him.

That’s one of the things that I love about Doctor Who; it’s definitely not afraid to be silly from time to time.  At its best, the series has always possessed a healthy balance of the serious and the ridiculous.  Speaking of which…

Maybe it would not be something that would be enough to fill out an entire episode.  In fact, perhaps it is an idea better left as an offhand comment by Missy about an untold adventure of the Doctor.  But I really have to smile at the idea of the Doctor facing a horde of vampire monkeys.

That’s my take on this two part story.  While I didn’t think it was an overwhelming success, and there were definite weak points, for the most part I liked it.

10 thoughts on “Doctor Who reviews: The Magician’s Apprentice and The Witch’s Familiar”