The Bozz Chronicles was a six issue comic book series by writer David Michelinie and artist Bret Blevins.  It was originally published bi-monthly by Marvel Comics under their Epic imprint from December 1985 to November 1986.  I recall seeing house ads for the series back when I was nine years old, but I never had an opportunity to read it.  Now, thirty years later, The Bozz Chronicles has finally been collected into a trade paperback by Dover Publications.

Michelinie was inspired to create The Bozz Chronicles after seeing the Steven Spielberg movie E.T. the Extra-Terrestrial.  An idea struck Michelinie: What if an alien landed on Earth in an earlier era, before human technology was advanced enough to cobble together a device with which to phone home?  Michelinie decided to have his alien protagonist become stranded in England in the late Victorian Era, a period that he knew would be familiar to readers through literature, television and films.

Epic Comics editor Archie Goodwin suggested that Michelinie collaborate with up-and-coming artist Bret Blevins.  It was Blevins who designed the looks of the characters, including the unique appearance of Bozz (so called because his unpronounceable alien name begins with a buzzing sound).

Having become marooned on Earth in the late 19th Century, Bozz is overcome by despair.  He is a gentle, soulful being, a total outsider in the chaotic world of humanity.  Despondent over the thought of never returning home, Bozz is ready to kill himself.  His suicide attempt is interrupted by Mandy Flynn, a London prostitute.

Mandy immediately takes a liking to Bozz.  Inspired by the writings of Edgar Allan Poe, she decides to set herself and Bozz up as private investigators, hoping that the intellectual stimulation of solving mysteries will distract the alien from his severe ennui.  On a more pragmatic level, Mandy also recognized that the brilliant Bozz has the potential to bring in a large number of well-paying clients, thus providing her with a way out of the dangerous, degrading profession of a hooker.

On one of their early cases, Bozz and Mandy encounter “Madman” Salem Hankshaw, a two-fisted Texan expatriate.  The rough & tumble American joins their detective firm, providing both muscle and snarky wit.  Bozz and Mandy’s investigations also results in them crossing paths with the aristocratic Colin Fitzroy who, dissatisfied with the life of the idle rich, joined Scotland Yard.  Salem and Fitzroy are polar opposites, so naturally enough a rivalry develops between them, especially after the police detective takes an interest in Mandy.

I’ve been a fan of Michelinie’s writing for many years, especially his two now-classic runs on Iron Man with Bob Layton.  Even so, I was especially impressed by Michelinie’s writing on The Bozz Chronicles.  It is very witty and intelligent, a deft blending of Grand Guignol and farcical slapstick with a helping of genuine sentiment.  Michelinie does good work in developing his cast of characters, and in constructing the bizarre mysteries that drive the plots.

Blevins is another creator whose work I enjoy, and I was very impressed by his art on The Bozz Chronicles.  He demonstrates a genuine versatility in these issues.  Bozz is a cartoony, abstract figure, and Mandy is drawn as a sexy “good girl” pin-up type.  In contrast, many of their adversaries are grotesque monstrosities. 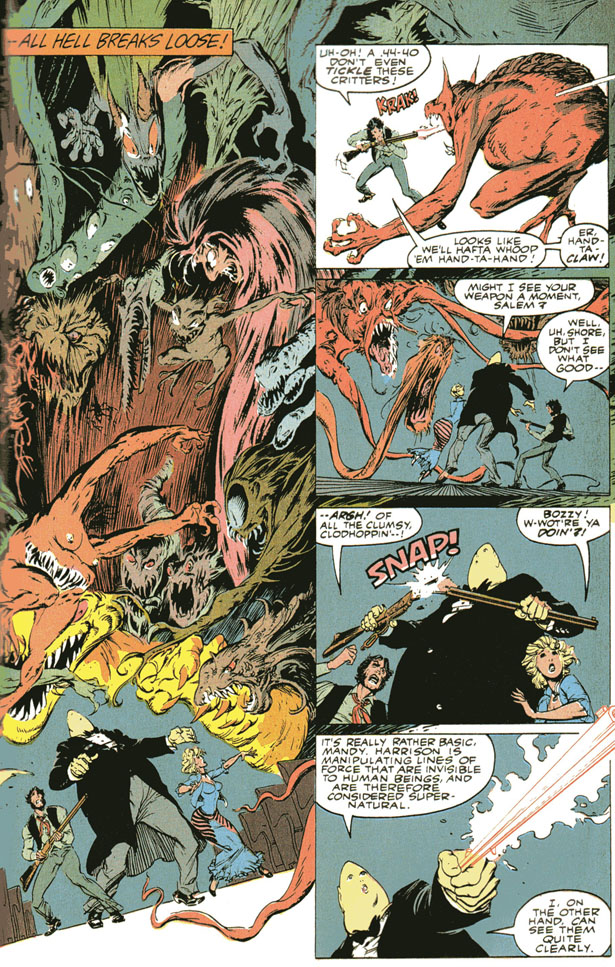 The Bozz Chronicles is an early example of what is now known as steampunk.  I think it is noteworthy that most steampunk involves taking the aesthetics of the late 19th Century and transplanting them into a different era or dimension.  This is undoubtedly due to the fact that for most of the population of the Victorian Era life was extremely difficult and grueling.  It was characterized by a cavernous divide between an impoverished majority and a wealthy aristocracy, by the exploitation of labor, and by the beginnings of global pollution as private industry ran completely unregulated.

(The novel Hard Times by Charles Dickens, first published in 1854, offers a particularly brutal portrait of this time period.)

Michelinie and Blevins do not shy away from the unpleasant realities of the Victorian Era.  The character of Mandy is a definite example of this.  Orphaned after her father abandoned her and her mother died, the uneducated young woman was forced to become a prostitute to make ends meet.  In one story Michelinie introduces a group of wealthy men seeking to use super-science to manipulate the political landscape, to ensure that the dire economic status quo remains in place.  As rendered by Blevins, London during the Industrial Revolution is a grimy & dangerous city.

Also contributing to the series is John Ridgeway.  Due to deadline problems, he drew issue #4.  This made for an unusual experience.  On a creator-owned title you very seldom see outside artists coming in to do a fill-in story.  Cerebus the Aardvark was only ever drawn by Dave Sim, every issue of Strangers in Paradise was by Terry Moore, and no one is going to be pinch-hitting for Gilbert & Jaime Hernandez on Love and Rockets.

Yet for one issue The Bozz Chronicles was drawn not by Blevins but by Ridgeway.  It was interesting to see Blevins’ designs interpreted by Ridgeway.  His style is so quintessentially British.  It was so very well suited to drawing this story, a horror mystery set in an English country village in the middle of the winter.

The only weak point I found in The Bozz Chronicles is in the depiction of native Africans.  In the last two issues of the series we meet a tribe who, having encountered other members of Bozz’s people centuries before, believe he is a god.  Now admittedly Bozz is a very unusual looking figure, and he possesses some amazing abilities that seem very much like magic.  Nevertheless, the Africans do come across as rather superstitious and a bit gullible.

Okay, aside from that, I really enjoyed The Bozz Chronicles.  I read the entire book in less than a day.  I did not want to put it down.  And when I got to the end I was disappointed, because I knew that was it, there were no other stories by Michelinie & Blevins featuring Bozz and Mandy and Salem.  I wanted more!

Fortunately, because The Bozz Chronicles was published through Epic, Michelinie & Blevins retained ownership of the series.  Hopefully, with the original material now back in print, it will generate enough interest for them to reunite to create new stories.  Blevins drew a new illustration for the TPB cover, which I take as a good sign.  Cross your fingers.