Michele and I like to joke that our cat Nettie Netzach is secretly a superhero, that when we aren’t around that she moonlights as the dynamic Netzach Wondercat.  So when I found out that there was an actual comic book series about crime-fighting felines, Hero Cats, of course I had to pick it up.

I actually learned about Hero Cats back around this year’s New York Comic Con.  I wasn’t able to go to the convention, but Jim Hanley’s Universe was having a signing event to tie in with it.  One of the guests was Marcus Williams, penciler of Hero Cats.  I looked at his work on Facebook, and thought it was fantastic.  Unfortunately I ended up not being able to go to the JHU signing either, due to a last-minute emergency.  But shortly afterwards I found the first two issues of Hero Cats for sale at Forbidden Planet and Midtown Comics.

Hero Cats is released by Action Lab Entertainment, the publisher of many fine comic books, including Molly Danger by Jamal Igle.  Hero Cats is written by Kyle Puttkammer, penciled by Marcus Williams, and inked by Ryan Sellers.  It is a fun, adorable, exciting series about six cats who have joined forces to protect the human population of Stellar City.

In the first issue, we are introduced to this group of brave felines by Cassiopeia, an orange tabby.  Growing up a stray alongside her brother Bandit, a black & white kitty, Cassiopeia was a literate feline who would read the books & magazines sold at the newsstand above which the two of them lived.  One day Cassiopeia spotted a signing by Lillian C. Clark, her favorite author, at the book store across the street.  Waiting outside for a chance to meet her, Cassiopeia was adopted by Lillian, and the two become very close. 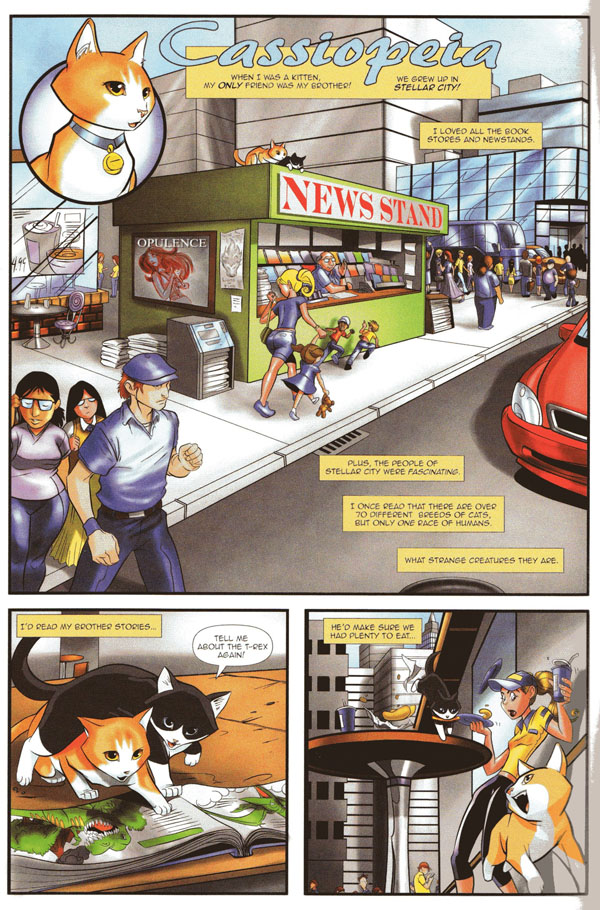 Lillian’s niece Amelia was an astronaut, and her spaceship became lost on a mission to study a comet striking Mars.  Lillian knew how upset Amelia’s astronomer husband Stanley and their daughter Suzie both were.  Realizing that Cassiopeia would be of great comfort to Stanley and Suzie, she gave her cat to them, pretending that with her book signing schedule that she could no longer care for her.

Around this time humans in Stellar City started manifesting super-powers.  Some, naturally enough, became criminals.  Cassiopeia decided to fight against these villains, joining up with five other cats:  Midnight, Belle, Rocket, Rocco and Ace.

Unknown to Cassiopeia, her humans have also gained powers, and have both adopted costumed identities to fight crime.  Stanley is Galaxy Man and Suzie is Cosmic Girl.  In short epilogues illustrated by Tracy Yardley we get to view the events of each issue from their point of view. 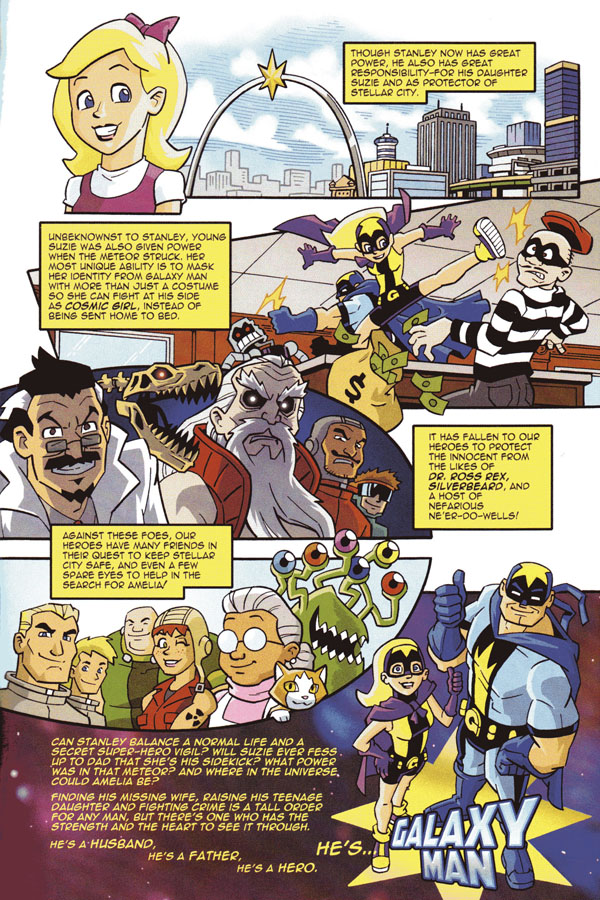 Puttkammer invests each of the six crime-fighting kitties with distinct personalities and perspectives.  The artwork by Williams & Sellers very much brings this band of brave felines to life.  Through the combination of script and art these cats are each unique individuals, with their own charming quirks.

Having introduced the cast of cats in the first issue, Puttkammer takes to time to explore their personalities, and examine how they interact with one another.  Belle and Ace are arguing about whether or not it was a good idea to allow Cassiopeia to join the team so soon.  Belle believes that Cassiopeia is untrained and should not be fighting alongside them.  Ace says he has full confidence in Cassiopeia.  Belle responds that she believes Ace’s feelings for Cassiopeia are affecting his judgment.  The two of them also end up debating the merits of human crime-fighters such as Galaxy Man and Cosmic Girl, as well as discussing the latest threat to Stellar City: an irresponsible teenager known as Johnny Arcado who is bringing video game monsters to life.

The entire team gathers, and they set out to stop Johnny Arcado, who lives in the house next door to Belle’s human.  Soon enough the cats are fighting Johnny’s computerized creations.  Cassiopeia proves herself to the team when her ability to read enables her to instruct Ace on how to operate Johnny’s alien-augmented arcade machine.  Ace uses it to create a giant robot to crush the monsters.  Meanwhile in the epilogue we see Galaxy Man and Cosmic Girl dealing directly with Johnny Arcado himself, all of them unaware of the crucial role Cassiopeia and her four-legged friends played in thwarting the threat to Stellar City. 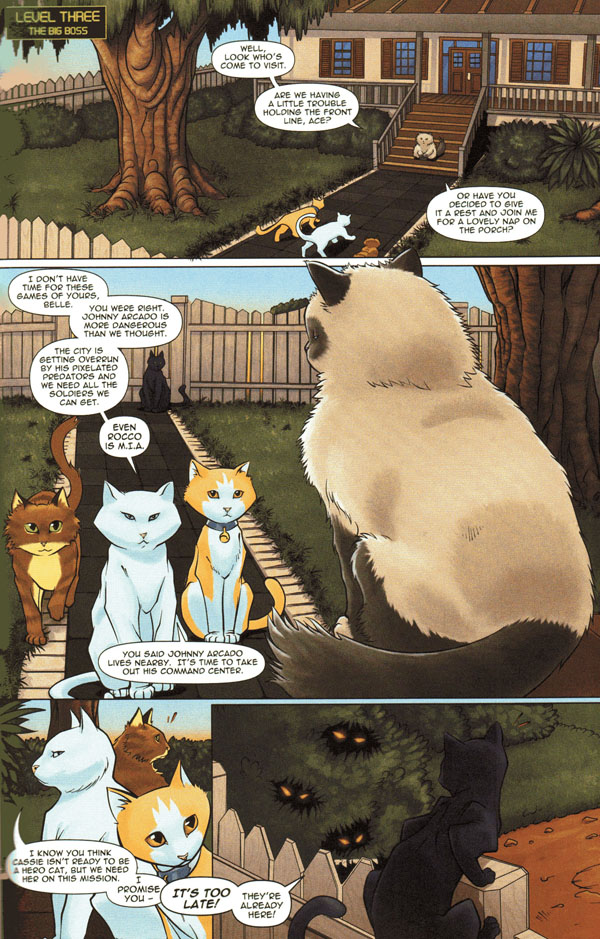 If you like both cats and comic books then Hero Cats is highly recommended.  Puttkammer is a writer who is successful at crafting stories that are genuinely all-ages.  His scripts are genuinely fun, as well as intelligently written so that they do not talk down to younger readers, with a level of sophistication that will appeal to adults.  The artwork by Williams & Sellers is both cute and dynamic.  The cast of cats are all so wonderfully expressive.

According to the official Hero Cats website, issue #3 is currently available.  I’m definitely looking forward to picking it up.  You can order copies of all three issues through the website, along with plenty of other cool goodies, including issues of the Galaxy Man series and some cool t-shirts.