This past February  on Kickstarter there was a fundraising campaign that I happily supported.  Ever since then I have been eagerly anticipating the project that was in the works.  Yesterday the completed book finally arrived in the mail: The Collected Counter Attack! by Alisa Harris.

Alisa Harris is a Queens-based artist & cartoonist.  Michele and I first met her in May 2011 at the Mini Zine Fest held at Pete’s Candy Store, a bar in Williamsburg, Brooklyn.  Among the mini-comics that Harris had for sale was Counter Attack, a cute series about her two mischievous cats, Moe and Fidget, that she has been creating since 2005.  Michele and I have two cats of our own, Nettie and Squeaky, and in the last few years I have become a huge cat lover.  I purchased Counter Attack from Harris, and I found it adorable.  (The series is so titled because, as Harris explains “Any cat will tell you: the best position of attack is from the kitchen counter.”)

Harris does a fantastic job investing the illustrated versions of Moe and Fidget with the personalities they posses in real life.  Anyone who has ever had a cat can tell you that felines have very distinctive temperaments.  They can be funny and adorable and mischievous and bossy, often all within the space of a few minutes!  Harris’ ability to capture those qualities, as well as her charming art style, made Counter Attack a big success.  The comics kept selling out and she kept having to re-print them.  That’s when she came up with the idea for a Kickstarter campaign to fund a collected edition of Counter Attack, with brand new material included.

Personally speaking, I believe that mini-comics are a real fount of creativity.  There are many very cool self-published comics out there from numerous talented creators.  That said, I never know how to store or organize them!  So, yeah, since I kept re-reading my copies of Counter Attack, and I also kept misplacing them in my jumbled, disorganized piles of books and comics, a hardcover collection was something that appealed to me. 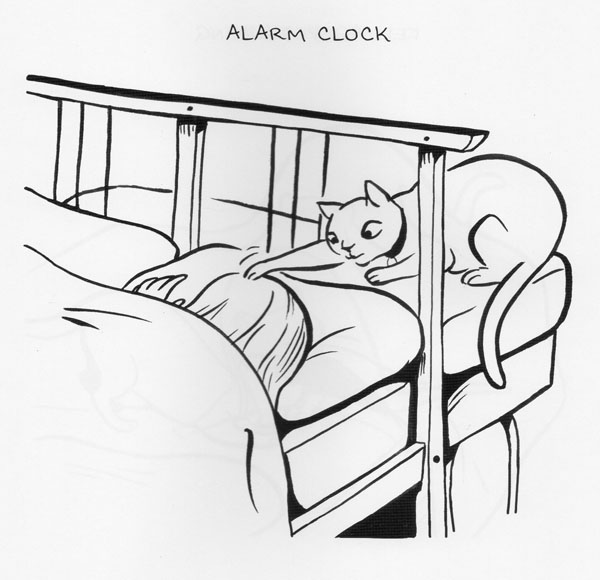 As a cat owner (or perhaps that should be a human who is owned by cats?) I have a lot of identification with the anecdotes and misadventures of Moe and Fidget that Harris illustrates.  I am certain that many humans with feline friends will also find these episodes vary familiar.  After all, what human with a cat has not been woken up at the crack of dawn (or earlier) by a cat who wants their breakfast?  Evidently in Harris’ household, her cat Moe likes to tap her on the head.  In my own case, Nettie will lean over my sleeping face and start poking me in the nose with one of her paws.  If that doesn’t work, and I still refuse to get up, on occasion she will extend one claw and begin prodding the tip of my nose with that, which inevitably works.  Yeah, sometimes Nettie can certainly be bratty! 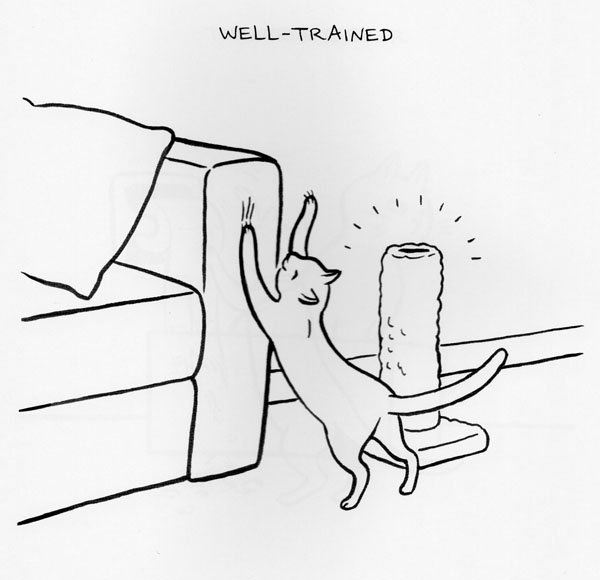 Cats also like to sharpen their claws.  I understand that this is a natural habit they engage in.  That’s why most people purchase a scratching post for their cats, so that their personal property will not get shredded.  Michele and I got one for Nettie and Squeaky.  I can count on one hand the times each of them have used it.  Instead they scratch everything else: the bed, the chairs, the sofa, the bookshelves, even my comic books!  And all the while they ignore a perfectly good, practically brand new scratching post!  I see from the pages of Counter Attack that Harris also experiences this phenomenon.

The Collected Counter Attack! is a cute, funny book.  Copies can be ordered through Alissa Harris’ online shop.  Also available is a “fun pack” containing the issues of her series Urban Nomad, which she describes as “Quirky true stories about living in the many boroughs of New York City.”  I recommend purchasing a copy of The Collected Counter Attack!, especially if you love cats.  You will be looking through the pages of the book and constantly saying to yourself “Yep, that’s my cat, too!”