“Revenge is barren of itself: it is the dreadful food it feeds on; its delight is murder, and its end is despair.” – Friedrich Schiller

Maura is the tale of Maura Sterling, a 21 year old woman from Delaware who is incredibly beautiful & sexy, yet also quite sweet & naïve. Maura is still a virgin, having saved herself for “the one.”  Her upbringing was an unpleasant one.  She comes from a wealthy family, but her father was thoroughly rotten, an abusive alcoholic who conducted numerous affairs behind his wife’s back.  Maura’s brother Bobby became addicted to drugs and eventually committed suicide.  Maura herself retreated into books, music and art.  So when she at last struck out on her own Maura was intelligent and well educated yet also very emotionally vulnerable, eagerly searching for the love she never found at home.

Working as a temp at a computer company, Maura meets Derek Morgan. He is a charming, handsome man, and he immediately sets his sights on his young, attractive co-worker.  At first Derek appears to be all that Maura has ever wanted; he is soulful, cultured and romantic, wooing her with his guitar and poetry.  One day Derek takes her to Phillip’s Park and leads her through the forest to a secluded area, a forgotten bench by a pond.  “This is where I came as a child to think,” Derek tells Maura.  “When the world around me seemed so unbearable. Away from my abusive father. This was the only place I could find solace. And now I have found that special person to share it with.”  Having said all the right words, Derek seduces Maura, and the two of them make love on the park bench. 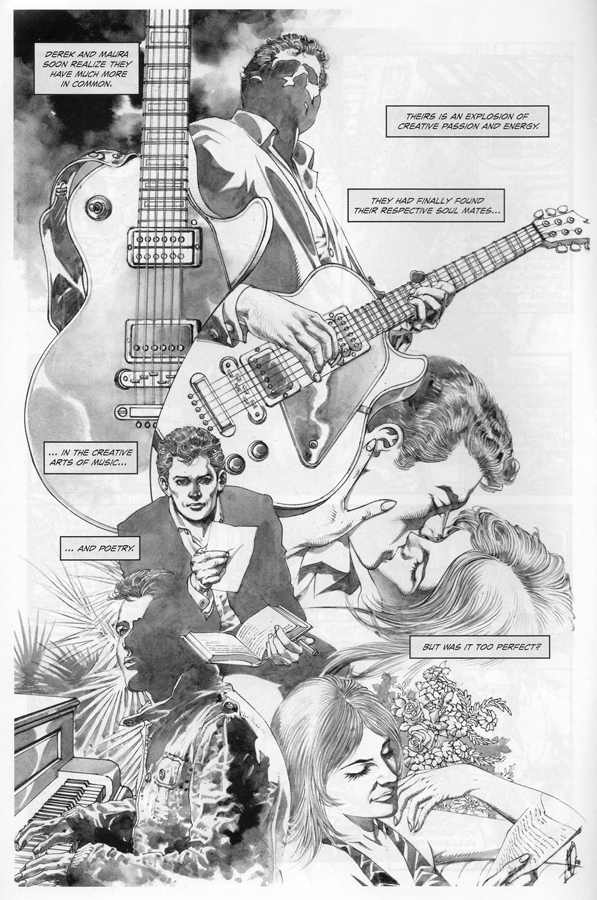 Maura is subsequently in heaven, believing she has found her soul mate. Tragically, she does not realize that she has been played by Derek.  He is, in fact, a manipulative asshole, a bullshit artist with a girlfriend of five years.  He has been carrying on multiple affairs during that whole time, seducing numerous women, bringing them to that same bench in Phillip’s Park, wooing them with that same sob story, using and then discarding them.  He is, in other words, very much like Maura’s father.

Unaware of any of this, Maura begins sending love letters to Derek. He, of course, having gotten what he wanted, is already moving on to his next target, Kathy, another lovely co-worker.  Maura’s last letter to Derek is a message asking him to meet her at the park bench.  She waits there, a ring in her possession, intending to ask Derek to marry her, not knowing that he has tossed her letter into the trash unread.  And so she waits.  And waits.  And waits.

Weeks pass by, and Derek decides to bring his latest conquest to the bench in Phillip’s Park, intending to woo Kathy with his sad tale of a lonely childhood. But before he can, he spots a figure on the bench.  It is Maura, still waiting, but now changed.  She is not quite dead, but neither is she really alive.  Enraged at the sight of Derek with another woman, Maura grasps his hand and slips on the wedding band, then kills him with a maggot-laden kiss.  Turning to Kathy, the still-enraged Maura hollers “Scream all you want, bitch! No one will hear you here! After all… he wanted to share this special spot… with you!”  Maura strangles the other woman, and standing over her victims she declares “Now it’s yours… forever!!!”

The undead Maura’s lust for revenge is unquenched. She embarks upon a killing spree, luring away boyfriends and husbands from their significant others with her sexuality, and then brutally murdering them for their infidelities.  On each of their hands she places a wedding band, forged out of silver coins stolen from her father.  Reflecting on what she has become, Maura admits that she misses her mother.  But she then states to herself “I was foolish to trust you or anyone else for that matter. Death is my friend now and it is mine to share with those most deserving.”

While Maura is busy with her lethal mission, she is being sought by another. Martin is a private investigator who is looking into the killings.  Hired by Maura’s parents to find their missing daughter, Martin soon deduces that she is the culprit behind these slayings.

Martin is a despondent figure. Middle aged, addicted to cigarettes, he looks back on his life and perceives myriad missed opportunities, squandered potential.  He is in mourning over the recent death of his nephew serving abroad in Iraq, and reflecting on his own seemingly dismal future.  In his own way, Martin is as much a lost soul as his supernatural quarry.

Undeterred by this pursuit, Maura continues on her dark course. Consumed by grief and hurt and jealousy and rage, Maura is embittered at the world, and she wishes to lash out.  But her anger, her inability to allow herself to once again trust others, eventually becomes her undoing.  The story comes to a close on a tragic note, one that left me genuinely saddened. 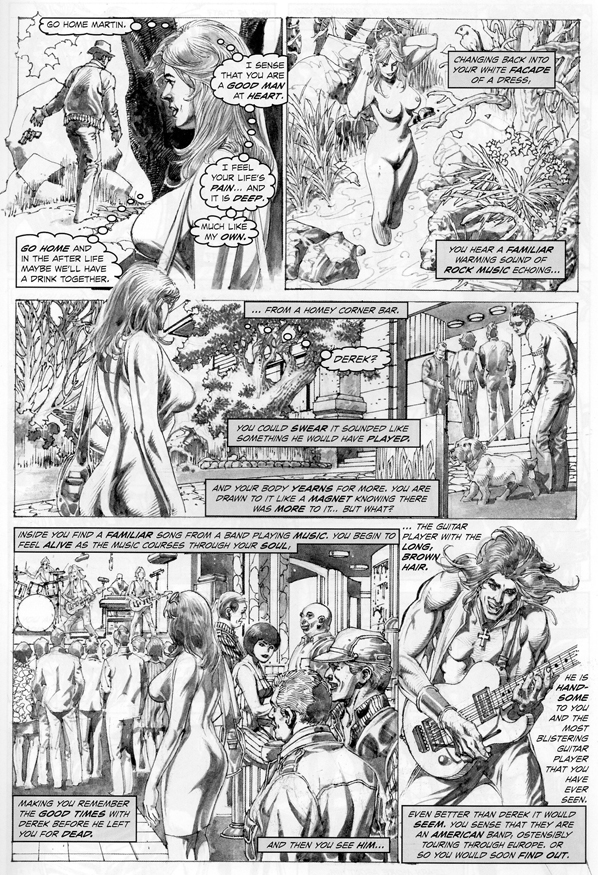 Erik J. Kraus writes a tangibly atmospheric story. His scripting is florid and poetic, rich with mood and emotion.  Kraus delves into the minds of his characters, lays bare their souls.  There is a genuinely melancholy, reflective tone to his work.

The name Maura is, of course, a variation on Mara. In European folklore a Mara was a vampiric spirit that visited men in their sleep.  It would assume the form of seductive woman in order to drain the life out of its victim.  Similarly, in Buddhism, the Mara was a demon that sought to tempt the Buddha with a vision of its three beautiful daughters, lustful figures of the flesh to lead the sage away from his pure, spiritual path.

Kraus has obviously taken inspiration from these legends and given them a modern, feminist slant.  He has crafted a protagonist who is driven by the betrayals and misogyny of men to exact revenge, a woman who is ultimately, tragically consumed by her hatred.

What initially drew me to Maura was the artwork by Rudy Nebres. I have been a huge fan of his since I first discovered his work through the Vampirella stories he illustrated for Harris Comics in the mid-1990s.  I soon learned that the Filipino-born Nebres had in the early 1980s previously worked on the original Vampirella magazine from Warren Publishing, along with their other horror & sci-fi books.  Among his other credits, he worked at Marvel in the 1970s and on the Archie / Red Circle superhero titles in the 1980s.  I have a great fondness for the rich, illustrative work of the Filipino artists, and Nebres is definitely one of my favorites.

Nebres artwork on Maura is absolutely stunning. The lavish attention to detail is amazing, and the layouts dramatic.  His depictions of Maura Sinclair are wonderful.  He renders her adeptly in all of her different aspects.  Through Nebres’ pencil, Maura is a beautiful & sensual figure of seduction, an innocent & wounded soul, and a horrific half-decayed monstrosity hungering for vengeance.  In the final scenes, Rudy captured the raw, tragic emotion of Maura perfectly.  He is such an amazing artist.

Viewing Nebres’ amazing art on Maura, I find myself wondering why the hell he isn’t getting more assignments nowadays. Dynamite Entertainment, the current publishers of Vampirella, ought to be knocking on his door with a sack full of money in hand asking him to work for them.  But I’ve ceased spending too much time trying to figure out how the minds of editors and publishers work.  At least Kraus was wise enough to have Nebres draw this book, with wonderful results.  He did great work on Maura, and when I met him again at the New York Comic Fest in June I made certain to bring along the issues to get autographed.

The cover artwork on these two issues is very good. Glenn Fabry is, of course, a highly-regarded artist who has done stunning work for the 2000 AD anthology series and painted amazing covers at DC / Vertigo.  He does nice work over Nebres’ pencils for the first issue cover image.  On the other hand, off the top of my head I cannot recall any other work by Steven R. Cobb.  Nevertheless, his cover painting for issue #2 over Nebres’ pencils is fantastic, both beautiful and grimly horrifying.

Kraus has been working on getting Maura reprinted as a single volume with extra material. While that has unfortunately yet to materialize, the entire 56 page story is available digitally through Comixology.  I certainly recommend purchasing it.  It makes for a great read during the Halloween season.