After months of waiting, the eighth series of Doctor Who is here, featuring the full debut of Peter Capaldi as the Twelfth Doctor, with Jenna Coleman returning as Clara Oswald.  I canceled cable television several months ago, and I was concerned I’d end up missing the new episodes.  Fortunately I was able to purchase the entire season on iTunes to watch on my laptop.  Here is a quick look at the first two episodes, “Deep Breath” and “Into the Dalek.”

When a tyrannosaurus shows up in Victorian London, it transpires that the newly-regenerated Doctor had landed the TARDIS in prehistoric times, where it got swallowed by a dinosaur, which then got transported to the late 19th Century along with its would-be meal.  Fortunately the t-rex coughs up the TARDIS on the banks of the Thames, where the Paternoster Gang is investigating the presence of the dinosaur.  And so Madame Vastra, Jenny Flint and Strax are reunited with Clara, and introduced to the Twelfth Doctor.

Following on from his transformation at the end of “The Time of the Doctor,” our resident Time Lord is understandably discombobulated.  He is quickly put to bed in Vastra & Jenny’s house, while Clara attempts to process what, exactly has occurred.

To be honest, of all the people in the universe, you would expect that Clara would have the easiest time accepting the Doctor regenerating.  Perhaps she doesn’t really remember her experiences as “the Impossible Girl” whose consciousness was fragmented and scattered about myriad points in the Doctor’s timeline.  However, she quite recently met both the War Doctor and the Tenth Doctor during the events of “The Day of the Doctor.”  So she knows he can regenerate, and that even though he looked young he was really a couple of thousand years old.  This makes it very surprising that Clara is seemingly in shock that the Doctor is suddenly completely different and older-looking.  Perhaps it is a case of the difference between knowing something is possible and actually seeing it occur before your eyes?

Still, Clara’s uncertainty and difficulty accepting the new incarnation of the Doctor does lead to an interesting scene between her and Vastra (Neve McIntosh).  Often the Paternoster Gang is written with a rather tongue-in-cheek manner, and they are typically depicted as moving about very comfortably within Victorian England, accepted by the authorities as experts on strange phenomenon.  Given that, it is easy to forget that Vastra is an outsider, a Silurian who was born millions of years ago, now living in a completely alien world.  Writer Steven Moffat addresses this in “Deep Breath,” showing how she copes with her new existence among humans who are often unable to accept anyone or anything that is strange or different.  It makes sense that Vastra would feel a certain kinship to the Doctor, who is also an outsider.

Truthfully, I did not fine the plot of body-snatching clockwork robots especially compelling.  I was actually wondering at what appeared to be an apparent plot hole.  These mechanical beings supposedly crashed on Earth centuries before and have been harvesting humans to rebuild themselves all this time, but their activities have only been noticed for the last few months, with the London newspapers reporting various instances of supposed spontaneous combustion (they were burning their victims to disguise the stolen body parts).  Maybe this is something that Moffat is going to address later on in the eighth series, that some outside force woke them up.  Perhaps it ties in with that enigmatic woman in black named Missy (Michelle Gomez) who popped up in both of these episodes.

Probably the best part of “Deep Breath” was Capaldi.  Early on, his post-regeneration instability gives him an opportunity to engage in some humorously odd observations.  Looking in the mirror at his new face for the first time, he wonders why he now looks this way, if for some subconscious reason he chose this appearance.  He also has a bit of criticism concerning one particular feature:

Even in this confused state, the Doctor still wants to help return the tyrannosaur to its own time period, recognizing that it is an innocent being that was plucked into a strange place through no fault of its own.  And he is distraught when the dinosaur is killed by the clockwork robots.  We also see the Doctor is genuinely hurt and disappointed at Clara’s difficulty in accepting that he has changed.

Towards the end of “Deep Breath,” Capaldi really comes into his own.  Confronting the leader of the robots aboard its makeshift dirigible floating over London, the Doctor boldly declares:

“Those people down there, they’re never small to me. Don’t make assumptions about how far I will go to protect them, because I’ve already come a very long way. And unlike you, I do not expect to reach the Promised Land.”

In the next scene, following on from the Doctor’s warning, we discover that the robot has been destroyed, having fallen out of the blimp and become impaled upon a metal steeple.  You are left wondering if the clockwork man committed suicide once it became convinced it would never reach the mythical paradise it believed in, or if the Doctor was forced to kill it.

“Deep Breath” was a somewhat uneven episode.  There were a number of good scenes, character moments and performances that perhaps were not connected together as well as they could.  I was a bit underwhelmed, although Capaldi definitely impressed as the Twelfth Doctor.

I was definitely much more impressed with this week’s episode, “Into the Dalek” co-written by Phil Ford & Steven Moffat.  Sometime in the far future when humanity is engaged in a massive space war with the Daleks, the Doctor rescues Journey Blue (Zawe Ashton) when her fighter ship is destroyed.  Returning her to her home spaceship, the Aristotle, the Doctor discovers that the humans have taken a Dalek prisoner.

Strangely, this captured Dalek seems to have “turned good” and is expressing a desire to fight against its own kind.  Although suspicious and extremely skeptical that Daleks are capable of any sort of change from the conformity that is genetically programmed into them, the Doctor nevertheless reluctantly agrees to help the humans repair it, in the hopes it will aid them in their fight, and show a way in which to grant empathy and creative thinking to the rest of its species.

The Doctor pops back to 2014 to collect Clara from Coal Hill School, where she is still teaching, and returns with her to the future.  Together with Journey Blue and two other human soldiers, the Doctor and Clara are shrunk down and inserted into the Dalek, which the Doctor has nicknamed “Rusty,” to locate & repair its internal damage, as well as determine the source of its personality change.  Yes, it’s Fantastic Voyage with a Dalek, something that the Doctor sardonically lampshades when he comments “Fantastic idea for a movie. Terrible idea for a proctologist.”

This episode really showed us the unsettling, darker side of the Doctor.  He wonders aloud if he is a good man or not, a question he asks Clara.  Once miniaturized inside Rusty’s form, when attacked by Dalek antibodies, the Doctor more or less sacrifices one of the human soldiers, harshly justifying his action by stating “He was dead already! I was saving us!”

The Doctor locates a radiation leak inside Rusty and seals it.  This saves the Dalek, but it also causes its internal computer to begin functioning normally, and it’s conditioning to be restored.  Rusty breaks loose on the Aristotle and begins attacking the humans, as well as summoning the Dalek mothership.  Soon the Daleks are assaulting the Aristotle in force.

Still shrunk inside Rusty, the Doctor is ready to give up, convinced that Daleks really can never change.  But Clara forces him to reconsider, and the two of them, with Journey Blue’s assistance, manage to reboot Rusty’s computers, once again giving the Dalek access to its full memories.  The Doctor mentally taps into Rusty, hoping that what the Dalek sees in his own memories & experiences will convince it to once again reject its programmed ideology…

Unfortunately Rusty is unable or unwilling to listen to the Doctor’s pleas.  Rusty ambushes the Dalek boarding party, wiping them out.  Afterwards, the Doctor, Clara and Blue have returned to normal size.  Even though they have won, the Doctor is disappointed, and Rusty is unable to understand why.

Rusty: Victory is yours, but it does not please you?
The Doctor: You looked inside me and you saw hatred. That’s no victory. Victory would’ve been a good Dalek.

The Doctor really had hoped to change the Daleks, to get them to grow, to put aside hatred, enable them to appreciate the beauty of the universe, to understand that other beings had a right to existence.  Instead, all he was able to do was to cause Rusty to embrace a different form of hate, to turn its destructive abilities upon a different target, namely its own species.  And, worse yet, this experience has once more reminded the Doctor of his own hatred, his own capacity for violence and destruction.

Throughout the episode, it is shown that the Doctor has a great dislike for soldiers and war.  At the end, when Journey Blue asks to join him and Clara on the TARDIS, the Doctor refuses.  “I think you’re probably nice. Underneath it all, I think you’re kind and definitely brave. I just wish you hadn’t been a soldier.”

The Doctor is undoubtedly reminded of his own experiences during the Time War, when he was the War Doctor, fighting against the Daleks.  The dislike for the military he shows here is at least partially due to his own self-loathing for the person he once was.  As much as he likes Blue, the Doctor will not take her with him.  Humans such as Clara have helped to awaken the best qualities in him, often serving as his conscience.  And so he is undoubtedly afraid that someone like Blue will bring out his worst aspects.

Ford & Moffat did an excellent job writing “Into the Dalek.”  The script really is top-notch, the ideas it touches upon complicated and thought-provoking.  The direction by Ben Wheatley is fantastic.  The sets, costumes, and special effects look great.  Capaldi does a superb job working with this material, giving a very compelling performance.  Regular Dalek voice artist Nicholas Briggs turned in a nuanced performance as Rusty, really bringing to life the creature’s emotional turmoil. 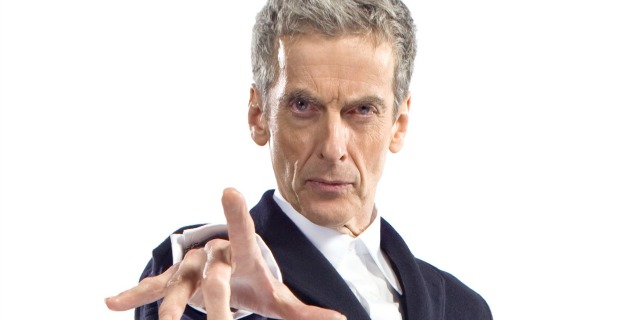 While not perfect, series eight of Doctor Who is off to a good start.  Peter Capaldi has definitely hit the ground running as the Twelfth Doctor.  I am very much looking forward to seeing more from him in the coming weeks.

Oh, yes, one other thing… I love the new opening title sequence.  As I understand it, it was inspired by a sequence created by series fan Billy Hanshaw that was posted online.  It looks very cool, with a rather steampunk style to it.  Definitely suits the new Doctor.

16 thoughts on “Doctor Who reviews: Deep Breath and Into the Dalek”