The latest issue of my favorite ongoing comic book series, Savage Dragon by Erik Larsen, is now out.  At issue #197, this long-running Image Comics series is rapidly closing in on the big two-zero-zero.  But, if you want to get technical about it, Larsen has actually reached that point with this issue.  Before he launched the ongoing Savage Dragon title, it was preceded by a three issue miniseries.  Which when you add everything up, makes Savage Dragon #197 the two hundredth issue written & drawn by Larsen.  Well, okay, there was also a zero issue, and maybe a few other things I’m forgetting at this moment.  But, whatever, you get the point! 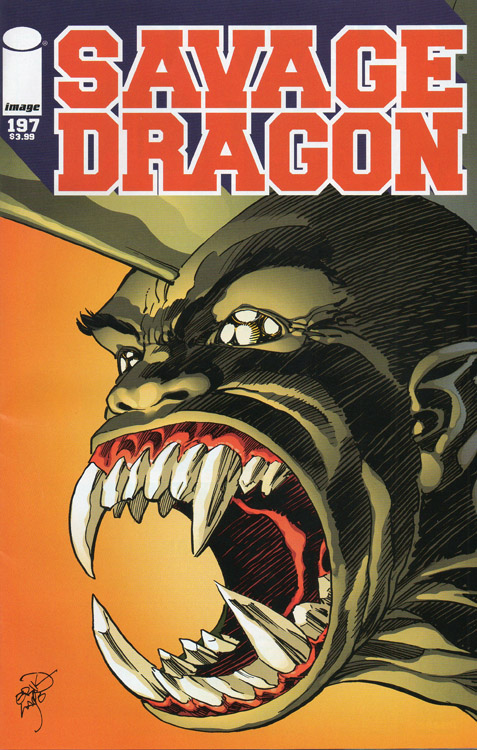 Ooooh, that’s a nasty-looking Malcolm Dragon on the cover to #197.  Whatever happened to him?  Well, in the last couple of issues, Malcolm was nearly killed by the Vicious Circle crime cartel.  He was found by a group of mutants living in Chicago’s lawless “Danger Zone” who hid him away from the Circle’s operatives.  However, the mutants also drugged Malcolm with the same mutagens that had been illegally dumped in the Danger Zone by Bellco Chemicals.  They hoped that Malcolm would ally with them to attack Bellco and retrieve their top secret cure, which would restore all of them to normal humans.  Unfortunately the mutants’ plan worked too well: Malcolm mutated and immediately went on a near-mindless rampage, killing nearly all of his captors.  And then his girlfriend Maxine arrived, accompanied by the Chicago PD.

As #197 opens, Maxine is desperately attempting to reason with Malcolm, to talk him down before he attacks both her and the cops.  Before she can get very far, though, the Vicious Circle, having finally located Malcolm, attacks in force.  However, the Circle agents are unprepared for the enhanced strength and unchecked brutality of mutated Malcolm, and what follows is a bloodbath.  This forces Dart, the Circle’s new leader, to step forward and tackle Malcolm herself, as Larsen, after months of build-up, finally presents a confrontation between the two.

Savage Dragon #197 seemed like a pretty quick read.  The main story clocks in at 20 pages.  That said, Larsen does offer up plenty of material.  There are Malcolm’s action-packed confrontations with Dart, the Vicious Circle, and Bellco Chemicals.  We also see the poignancy of the Danger Zone mutants’ desperate hope of once more becoming human, and Maxine’s concern for her boyfriend.  Larsen even manages to squeeze in a couple of instances of his trademark irreverent humor.  So, while the story moves along at a rapid pace, it still contains quite a bit of substance to it.

The issue also contains a six page back-up, the first chapter of a new Vanguard serial written by Gary Carlson and illustrated by Frank Fosco.  “Homecoming” sees Vanguard, accompanied by his robot pal Wally, his girlfriend Roxanne, and the few surviving members of his race, return to his home world for the first time in years.  During the intervening time, Kalyptus was invaded by its arch-foes, the brutal Tyrrus Combine, who also decimated the original Dragon’s people, the green-skinned, finned Krylans.

It’s nice to see Carlson once again penning the adventures of Vanguard.  I enjoyed the two miniseries he wrote quite a number of years back starring the character, and the various back-ups in Savage Dragon where he subsequently had the opportunity to return to the adventures of Van, Roxanne and Wally.  Carlson and Larsen are long-time friends & collaborators, and they’ve always done a superb job at coordinating & intertwining their various stories & characters.  With “Homecoming” it appears that Carlson is picking up several subplots previously set up by both himself and Larsen, and utilizing them as a springboard to launch this new Vanguard arc.

Fosco is another frequent associate of Carlson, as well as a talented artist.  Fosco most notably illustrated the 23 issue Teenage Mutant Ninja Turtles book written by Carlson that was published by Image in the late 1990s.  Fosco did good work on that series, and I’ve been pleased to see him subsequently draw a number of back-up stories in Savage Dragon.

It’s great that Erik Larsen is still chugging away full speed ahead on Savage Dragon.  Larsen, along with such talented compatriots as Carlson and Fosco, make this book is a real pleasure to read.  I am definitely looking forward to seeing what they have in store for us next, especially with #200 right around the corner.

Not to sound like a broken record, but if you aren’t reading Savage Dragon then I highly recommend giving it a try.