This one’s a bit late!  Love and Rockets: New Stories #6 by Gilbert & Jaime Hernandez came out this past September, and Michele bought it right away.  I ended up procrastinating taking a look at it.  And then when I did want to read it, I couldn’t remember where the hell I’d put it!  Well, I finally found it a few days ago.  So here, at last, is a look at the 2013 edition of Love and Rockets. 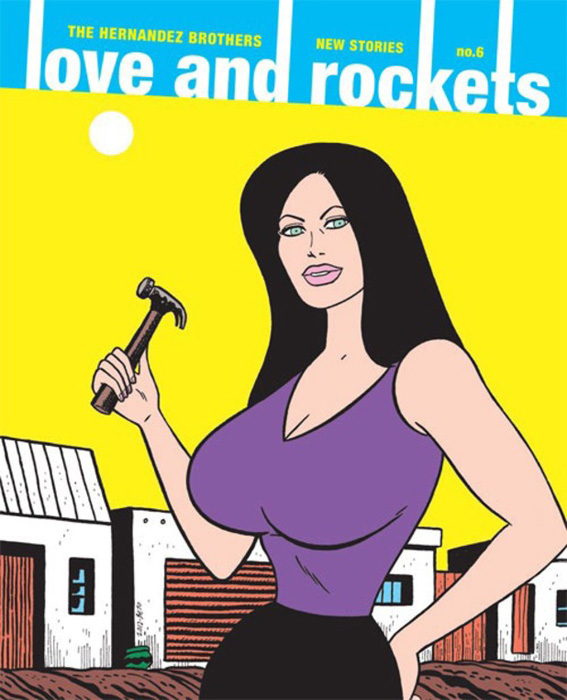 Gracing the cover of New Stories #6 is Killer, the sexy granddaughter of Gilbert Hernandez’s longtime protagonist Luba.  Within his half of this issue, Gilbert successfully looks to the future, while at the same time acknowledging the past.  The fact that the teenage Killer is depicted clutching Luba’s iconic hammer is an apt symbol for how the young character successfully straddles present day and earlier years.  Killer divides her time between California and the Central American village of Palomar, and she has affection for each of these different worlds.  This is a very effective way for Gilbert to write about the next generation of his ongoing saga while maintaining roots with the older characters.

Actually, Killer is much more interested in the past than many of the elders of Palomar.  Killer is fascinated by the stories she’s heard about her late great-grandmother Maria.  Having found a surviving short sequence from a now-lost movie that Maria starred in decades before, Killer wishes to find out much more.  In certain ways she seeks to emulate her great-grandmother’s legend.  In contrast, Luba, who was abandoned as an infant by Maria, understandably could not care less.

Gilbert effectively illustrates how someone can be many different people, depending upon who they’ve known, and how they’ve acted, at various points in their life (reminding me of the song “Too Many People” by the Pet Shop Boys).  Through a few brief flashbacks, we even see Maria stating, or perhaps rationalizing, that Luba was better off without her.  I never had too much sympathy for Maria in the past.  But thinking it over, I realize that Maria was a flawed woman who led a difficult life, and who did change over time.  The Maria who gave away Luba is not the same Maria who years later did attempt, in her own imperfect way, to raise her other two daughters, Petra and Fritz.

Killer, as we see in New Stories #6, is actually a very fortunate individual.  Luba never really knew either of her parents.  Luba’s daughters each had varying degrees of difficulty in their relationships with her.  Killer, while her parents Guadalupe and Hector may be divorced, still has both of them in her life, offering her their love & support.  In a way, Killer is a glimpse at the woman Luba might have become if she’d had a more stable, loving upbringing.  Killer is confident and independent like her grandmother, but she is also, despite a seemingly impregnable exterior, much more capable of establishing friendships with and ties to other people. 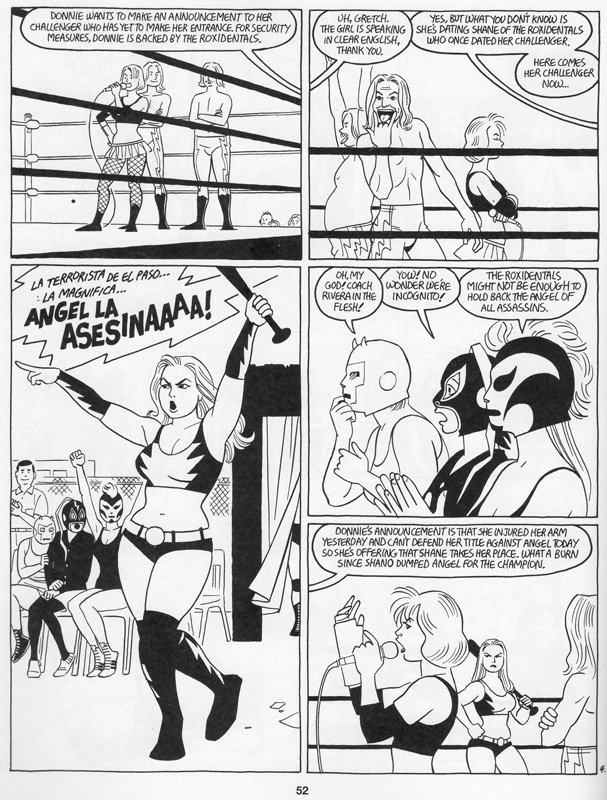 Over in Jaime Hernandez’s portion of New Stories #6, the focus returns to Tonta, the teenage half-sister of Vivian “Frogmouth” Solis who was first introduced last issue.  As a reader, I felt that I didn’t really get to know Tonta all that well in her debut.  But, as I observed in my write-up of New Stories #5, just as it took Jaime time to develop Maggie, so too it was likely that it would also be a gradual process of witnessing Tonta grow as a character.  Indeed, she had a much stronger presence in New Stories #6, and I found myself becoming interested in her, invested in her story.

Last time I also commented that I hoped Jaime would bring Maggie’s friend Angel back, involving her in Tonta’s life.  Well, that is exactly what occurs, as Tonta is introduced to her high school’s new physical education instructor, Coach Angel Rivera.  And despite joining the hallowed halls of academia, Angel is still wild at heart, secretly moonlighting as a masked wrestler on the weekends.

We also get a close look at Tonta’s family life, meeting her mother and several of her other siblings.  And, oh boy, I’m starting to understand how Vivian turned out to be such a nut job!  Tonta’s family is so incredibly dysfunctional that they make Maggie Chascarillo’s childhood look like a portrait of sanity in comparison!  By the end of New Stories #6, I was really feeling for Tonta, as her already-screwy family splintered completely apart.  The teenager is left sadly wandering through half-remembered reminiscences of when she was a little girl, before everything in her life became horribly complicated by betrayal and insanity.

Those last few melancholy pages of New Stories #6 definitely left me wondering what’s in store for Tonta in the future.  At times like this, the annual format of New Stories is frustrating.  Part of me wishes that I did not have to wait until September for Fantagraphics to publish the next issue.  Of course, that is the mark of great creators, leaving you wanting to find out what happens next.  Jaime and Gilbert certainly possess that ability. 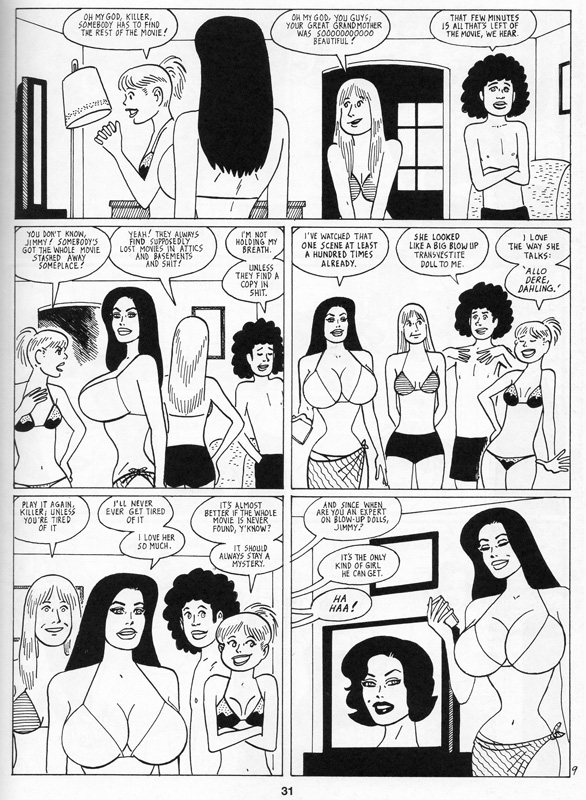 Actually, I find it interesting to compare and contrast the work of the two brothers.  There are, inevitably, certain similarities.  But there are also undoubtedly very distinctive qualities to each of their individual writing and art.  In a way, it is almost like looking at Kirby and Ditko side by side.  They were the two preeminent Marvel superhero artists of the 1960s, but in very different ways.  I’ve sometimes likened Jaime to Kirby, and Gilbert to Ditko, in regards to the sensibilities of their work.  Jaime is rather more straightforward in his plotting & scripting, and his artwork has a, shall we say, polished look.  Gilbert, on the other hand, often utilizes more offbeat, unconventional narrative structures, and his art style possesses a gritty, quirky mood to it.

Hmmm, okay, I am probably not doing as sufficient a job at articulating this as I want!  But hopefully you will get my point.  In any case, both Gilbert and Jaime do wonderful work in their own unique ways.