The much-anticipated Savage Dragon #192 finally came out this week, courtesy of Erik Larsen and Image Comics.  As Larsen himself admits in the letters page, this one took him a bit longer than usual, as he re-thought the course of the issue more than once.  No wonder, considering how significant an event it contained.

For a long while now, Larsen has been building up to a changing of the guard.  Since this series takes place in “real time,” everyone ages accordingly.  That, and Larsen certainly is not averse to killing off major characters.  So inevitably there was going to come a point where Dragon would get too old to be a superhero, or perhaps even die, and his son Malcolm would step into his shoes, becoming the series’ lead.  About two and a half years ago, in issue #169, I really thought that this event had taken place.  However, Larsen had left himself an avenue for reviving the Dragon.  And, indeed, within a few months he was back.  But now, finally, Larsen really has come to the crossroads with #192.  Dragon, previously convicted of murder for the crimes he committed under his Emperor Kurr personality and sent to death row, is seen on the cover apparently being led to the electric chair!

So, does he live?  Does he die?  If he does die, will his spirit spend the rest of eternity making mad, passionate love to a bevy of leggy super-models?  Read on and find out!  And, oh, yeah, SPOILERS!!!

Previously, Dragon’s race, the Krylans, was decimated by the brutal Tyrrus Combine.  Dragon’s one-time lover Lorella, seemingly the only survivor, managed to make her way to Earth.  She was convinced that Dragon held the key to creating a new generation of Krylans.  You can probably figure out the rest.  Y’know, the birds and the bees?  Yep, that’s right.  Hmmm, given that Dragon is already in his mid-fifties, I just hope he can, um, keep up his end of the bargain, so to speak!

Of course, there was just one catch to all this: since Dragon was super-powered, every single time he (and his previous persona, Kurr) had ever impregnated a female, his offspring gained his super strength, resulting in all his mates having a very good chance of dying while giving birth.  Lorella rigged up a device that would remove Dragon’s powers, making him a normal Krylan, so that they could then get on with the business of safely making babies.  Of course, said device happens to bear a remarkable resemblance to an electric chair, and it gives Dragon one hell of a zap in the process. 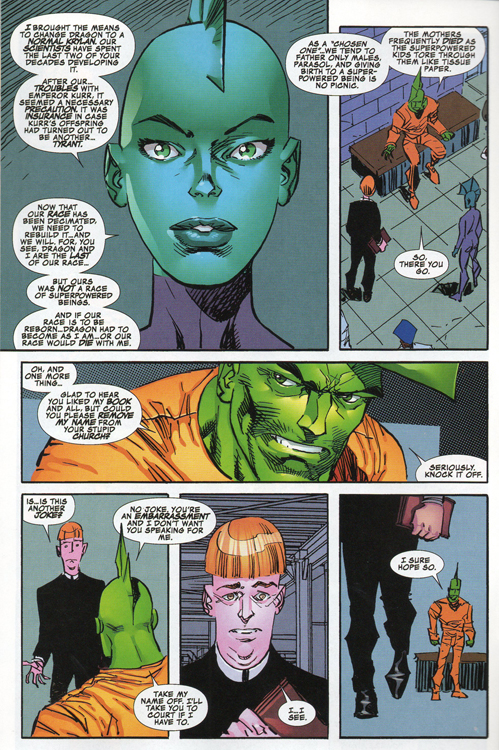 That Erik Larsen, he is such a tease!

Okay, there you are.  Dragon is now the equivalent of a normal human being, albeit one with green skin & a fin.  Which means that, even if he is able to get his conviction overturned and get out of jail, there’s no way he’s going to be able to return to slugging it out with supervillains.  So now it’s Malcolm’s show.

In an online interview, Larsen indicated that Dragon will still be sticking around, albeit as a supporting character, a mentor to Malcolm, likening him to the elderly Bruce Wayne seen in Batman Beyond.  And, wow, Savage Dragon #192 shows that Malcolm really is in need of some guidance when it comes to fighting crime.  Not only is he inexperienced, he’s also on the naïve side.  Between that, the majority of Chicago’s costumed heroes leaving town to join the Special Operations Strikeforce in Washington DC, and the sociopathic Dart having finally accomplished her goal of seizing control of the Vicious Circle crime cartel, I foresee some really rough times ahead for Malcolm!

Anyway, Larsen succeeded admirably in his misdirection, convincing everyone (myself included) that this really was the end for Dragon.  At the same time, he achieved his goal of permanently promoting Malcolm to the lead, while still keeping his dad around in some capacity.  Which is cool, because I enjoy the family dynamic between the two of them, as well as with Malcolm’s stepsister Angel.  Speaking of which, I hope she isn’t gone for long, and will continue to show up in the book.  As #192 demonstrates, Malcolm could probably benefit from some of Angel’s common sense.

I’m glad that Powerhouse and Flash Mercury, who had unsuccessfully attempted to steer the Vicious Circle in a more benevolent direction, managed to survive Dart’s brutal purge by skipping town.  As seen in the back-up story in Savage Dragon #190 written by Larsen with art by Frank Fosco, the two of them joined up with the Medusa-esque Fever to become professional monster hunters.  As with Angel, I hope Larsen brings this trio back to Chicago at some point to help Malcolm out.

Speaking of back-up stories, I’m happy Larsen is continuing to run these.  He has a cast of what seems like several hundred characters, and obviously he cannot fit them all into the main feature.  So it’s nice that he and a few other folks are working on these short stories.  Issue #190 also had a new misadventure of those inept crime-fighters Kill-Cat and Kid Avenger, aka the Deadly Duo, with art by Scott James.  The next issue had James illustrating a tale of the perpetually late Max Damage penned by editor Gavin Higginbotham.  And in the current issue, there’s a flashback tale of the diminutive dictator from Dimension X, Mister Glum aka Ba-Goom, written & drawn by Simon Mallette St-Pierre.

All in all, Savage Dragon #192 was a great read, a really well done transition issue by Erik Larsen.  I’m eagerly anticipating seeing Malcolm step up to bat in upcoming issues.  It looks like Larsen has some exciting, interesting stories planned for his series.