“Nothing on earth consumes a man more quickly than the passion of resentment.” – Friedrich Nietzsche, Ecce Homo, 1888

A quarter century may seem like a rather long time to produce 15 issues. To be fair, during that time Quinn & Vigil also collaborated on several Faust-related side projects published through Avatar. And, of course, they each had various other books they worked on separately. I think that Faust: Love of the Damned was their baby, though, and they really wanted to take their time with it. Was it worth the wait? Well, I’ve only been following their work for about a dozen years now, so I cannot speak for those who have been here since the beginning. But for myself, I thought that the final two acts were pretty darn good.

As Act 14 opens, the diabolical M, who is strongly implied to be the fallen angel Lucifer, is preparing to bring about the end of the world via the summoning of a titanic seven-headed serpentine monstrosity while impregnating Jade DeCamp. To accomplish the later, M enthralls Jade and, twisted fiend that he is, assumes the visage of her father, who molested her when she was a child. Meanwhile, John Jaspers, the man who sold his soul to M and became a psychotic vigilante, has risen from the grave, determined to thwart M.

Quinn’s scripting is very sophisticated and labyrinthine, his dialogue for M especially so. As was pointed out by Vigil in an interview posted on the Rebel Studios message boards, M is in love with the sound of his own voice. Indeed, the infernal one spends a great deal of his time in these two chapters philosophizing aloud about the state of the universe while he is in the midst of attempting to destroy it.

Actually, it is very interesting to look at M’s ideology. Unlike many depictions of the Devil in fiction, he is not motivated to commit evil simply for the sake of being evil. M appears to have a deep-rooted resentment against God. All these millennia later, he is still embittered at having been cast out of Heaven. M looks upon humanity, who God supposedly favored, and is actually disgusted that mortals so easily fall to his infernal temptations, turning the world into a dark morass of corruption and despair. As a result, he has adopted a goal of cosmic nihilism, a wish to sweep away everything in existence, including “the so-called Almighty’s miserable mistake, his foul offal… infestation Man.” 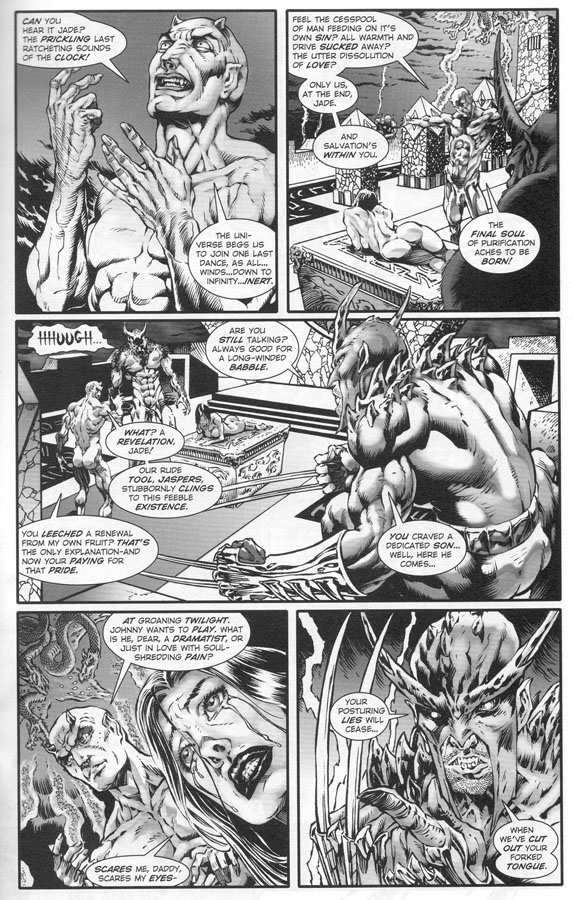 Faust: Love of the Damned is very much a story of fathers and sons. The pattern of M having failed and defied God is repeated in the relationship between M and John Jaspers. When Jaspers gave his soul away, he was remade as a near-unstoppable killing machine. However, he did not live up to M’s expectations, and then chose to stand in opposition to him. M is disgusted that Jaspers has rejected his creator, and is unappreciative of the “gifts” he was given. In Act 15, a bitter M tells him “I empowered you with pure desire, liberated you from the fog of thought and trivia of reason. Made you a god!” And, just as much of M’s motivation for wanting to bring about the apocalypse is to thumb his nose at the Divine One, so too does Jaspers want to stop M, to not out of any particular love for the world, but simply out of spite for his surrogate father.

It is to Quinn’s credit that M, despite being an extremely depraved figure, is not totally unsympathetic. Beneath his sick perversity, one can perceive the actions of a being angrily striking out at the perceived injustices heaped upon him by his creator, looking upon the world and questioning why the Almighty allows such chaos & despair. Underneath it all, M is actually a very human figure.

Another relationship poisoned by jealousy and bitterness is the one between M and Claire, his sadistic, sexually perverted paramour. The later has thrown in her lot against her demonic spouse, spurned by his choice to use the “innocence” of Jade DeCamp to usher in annihilation, rather than “a chalice so befouled.”

Quinn’s characters are deeply dysfunctional. They represent a microcosm of humanity, demonstrating how the potential nobility and goodness that we can be capable of is all too often derailed by our petty resentments, our obsessions with the past, and our defiant desires to take charge of our own destinies at the expense of all others. 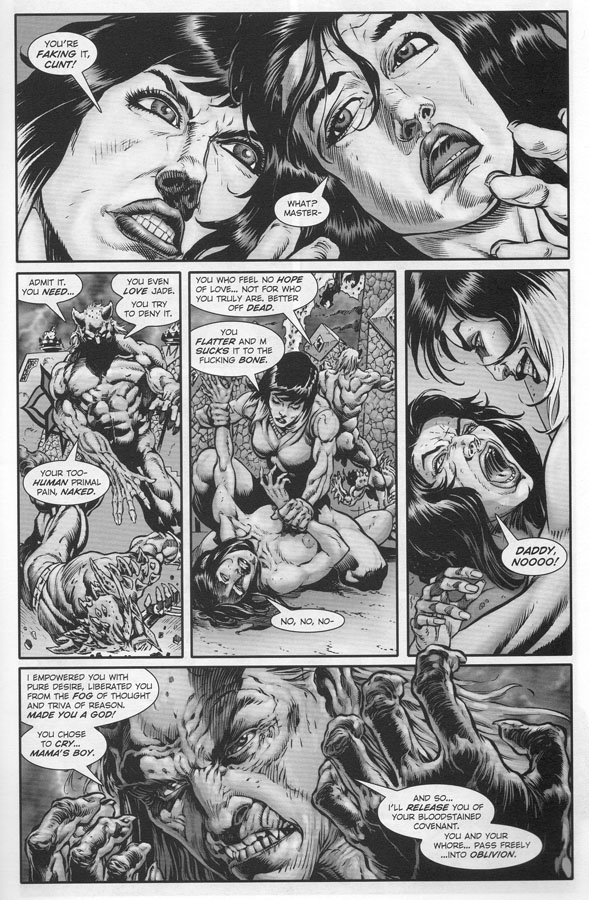 Casting an eye at the art on Faust: Love of the Damned, one finds exquisitely detailed work from the pen of Tim Vigil. Simultaneously beautiful and twisted, Vigil’s art is stunning. One of the benefits of this series spanning a 25 year period is that we can witness his development as an illustrator and storyteller. Looking at the early chapters, you can see a young artist with energy and a great deal of potential, albeit with certain rough edges. Fast forward a quarter century, and Vigil work has become an extremely polished, his layouts dynamic, his inking full of precise detail. The grey wash tones add a tremendous amount of atmosphere to the finished work. Really, it looks magnificent. Even on the pages that are awash with graphic violence and explicit sex are stunning for the lavish attention that Vigil gives the subject matter.

And that brings me to a crucial point. Faust: Love of the Damned is undoubtedly an X-rated affair, intended for a mature, adult audience. But it seldom seems to stray across the line into exploitation. The blood and nudity, the acts of copulation, rarely seem to be glamorized. I do think that the cover to Act 14, showing Jade with her face covered in gooey white gunk, is one of the exceptions, and is probably an image that ought to have been saved for the interior artwork. But the majority of the time, the creators are not setting out to sexually arouse their readers, but to achieve an atmosphere of disgust and revulsion, feelings of true horror.

(Having said that, it seems like Vigil does enjoy doodling naughty stuff 🙂 )

Now that Faust: Love of the Damned has concluded I hope that Quinn and Vigil will be able to reprint the entirety of the series. I’d certainly like to be able to re-read it from beginning to end, especially since I’ve never seen most of the middle chapters. I believe I would get a lot more out of this story once I am able to experience it in its entirety. In any case, most of the material has been collected into a series of Communion editions, which, along with the new issues, can be purchased at the Broken Halos website. Definitely check it out.

To reiterate what I wrote in my October 29th blog entry, now that Quinn & Vigil have finished the story of John Jaspers, it would be great to see them return to some of the other characters from the Faust universe, such as Joanna Tan and the pairing of Kia & The Wrath. There is a lot of potential in them, and their past stories have left me interested in learning what happens to them next. Whatever the case, Quinn & Vigil are an amazing creative team, so I hope that we will see further collaborations from them in the future.