Over the last year or so, walking around New York City, riding the subways and busses, I’ve noticed something.  A lot of younger women nowadays are thin.  And I do not just mean that they are skinny.  These teenagers and twenty something gals are so thin that they look unhealthy.  The most striking aspect is their arms and legs, which look like twigs.  The rest of their bodies are ultra-svelte, in certain cases even appearing pre-pubescent.  It is not much of an exaggeration to say that some of these ladies bear more than a passing resemblance to victims of starvation from some Third World country than they do grown women.

I’ve pointed this out to my girlfriend.  She typically just shrugs, and informs me that it’s the style nowadays with younger women, the fashionable way to look.   In all honestly, I find that a rather disturbing phenomenon.  Thinking it over, I wonder how some of these women achieve their lean appearances.  I would not be at all surprised if at least some of them suffered from eating disorders.  I realize that we lived in a country where obesity is a serious problem.  But going to the complete opposite extreme is no solution!

Obviously it is a matter of personal preference, and different people are attracted to different body types.  But I have always had a fondness for more voluptuous, Rubenesque females.  Immediately coming to mind are such mid-20th Century sex symbols as Bettie Page and Marilyn Monroe. 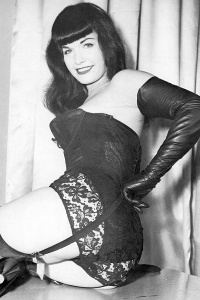 Both of these women were stunning, sensual beauties who exuded their own unique manner of sexuality.  Each of them is regarded as a cultural icon.  But I very much believe that if Bettie Page or Marilyn Monroe were alive today, attempting to break into modeling or acting in the early 21st Century, they would meet with little success.  In fact, they’d probably be considered “overweight” by the powers-that-be in the fields of fashion and showbiz.

I think it’s a tragedy that so many young women feel compelled to pursue excessive weight loss, striving to reach some kind of nearly-impossible waif-like physical ideal that has been imposed upon us by mass media and the corporate world.  Especially when these ladies may be risking their health to achieve that look.

Obviously if a woman wants to become thin, she should be allowed to.  But I hope she would do it for herself, instead of striving to be skinny because she believes society expects of it of her.  If you are going to lose weight, do so because it’s healthy and it will make you happy.  Don’t do it to try to please others or impress strangers.

And just remember: some of us do not find that ultra-skinny look to be beautiful.  Instead, we would much rather see a woman with a natural curvy figure.

3 thoughts on “Real Women Have Curves”